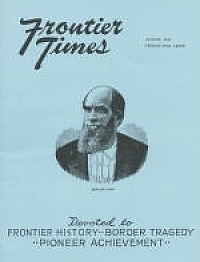 In the annals of Texas history there has never been a civil war with Texans fighting Texans but it almost took such a conflict before Richard Coke, the 13th governor of Texas, could take office. Coke had defeated the corrupt and tyrannical E. J. Davis who had held the governor's seat for almost four long years. Dick Coke pulled a twotoone majority over Davis in the 1873 election that saw nearly 100,000 votes cast. And that's when Texas almost had a civil war of its own. Davis and his radical "congressional reconstructing" cohorts had no intention of turning the state government back over to the people of Texas and giving up their plundering dictatorship. They decided that despite their defeat at the polls they'd fight. This is the story.

Origins and early history of old Camp Cooper which was established in 1856, was situated on a bend of the Clear Fork of the Brazos near the heart of the Upper Reserve.

Article espousing the virtues and medicinal qualities of Rattle Snake Oil as used in the days of the pioneers.

A. M. Boyd One Of Earliest West Texas Settlers

Alfred “Alph” Boyd, was born July 21, 1855, near Savannah, Tenn., and when 4, moved to Arkansas in oxen drawn wagons, one of his earliest recollections was of going 'coon hunting with his brother Zack. The family located to Texas in November, 1874. Later In 1904 the family moved to Abilene and this has remained his home since.

“A cowboy employed on one of the first 'ranches established in Shackelford County, ventured out unarmed one day to brand a young calf known to be with its mother in a bend of the creek near camp. He had accomplished his mission and was mounting his horse to return, when a single Indian fired upon him from the shelter of a neighboring bush. Without giving the savage time to reload his gun, the cowboy, whose name is unfortunately forgotten, charged down upon him with a yell, forced him out upon the open prairie, and with a deft cast of his lariat encircled his body, and dragged him, helpless and silent, back to the branding fire. As coolly and deliberately as though he was going about his every day business, the cowboy replaced the branding iron in the fire, brought it to the proper heat, and...” Mentions:Tom Jones, Bill Decker, Jeff Bonds * the Board of Registers at Clarksville *

The Work Of The Vigilance Committee

The first family ever to reside on Lost Creek, so far as is known, was that of John Bomar who moved there in 1859. A year or so later, quite a number of other families moved into the vicinity. Among the families living there between 1860 and 1866, was Joe Miller, J. N. Willis, R. D. Bedwell, Jim Whitehead. Bill Manor, Marion Coon, W. J. Hill, Antney Conner, Matt Trousdale, R. A. Ragsdale, Elihu Woodall, Dan Wills, Tom Harvey, Noah Taylor, Jim Connell, Bill Black, Wade Black and Meredith Spitler. This is the story of those early settlers and history of the region.