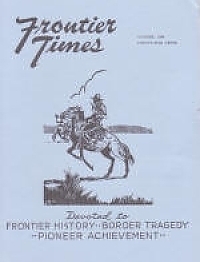 From Loyal Valley, Mason County, Texas, To New Mexico In A Covered Wagon

First hand account of the 1884 journey of Joseph Judson Hyatt, his wife Mary, their sons, Tom, Jim and John, and daughter Elizabeth, better known as Lizzie, Tom Moseley and his wife Sophie, and Jerry Moseley who left Loyal Valley, Mason county, Texas, with a herd of about 700 Texas longhorn cattle, to locate a ranch in New Mexico.

Written by John Warren Hunter, in 1910

S. W. Merchant was born in Texas and raised in Titus county, near Mount Pleasant. When the war broke out between the States, Mr. Merchant, then in the vigor of young manhood, was in El Paso del Norte, and when the Federal troops were withdrawn from the frontier posts of Texas, early in 1861, he and a few others were employed to take charge of Fort Bliss, near El Paso, and to look after the post and property belonging thereto. In February, 1861, Bethel Coopwood, the two Holden boys, and a man by the name of Winn, and S. W. Merchant set about and organized a body of troops known as the Arizona Spy Company, with Bethel Coopwood as captain. This company was made up of 64 men who, like Mr. Merchant, were seasoned to border life, and were ripe for any adventure, however daring or desperate. They were all Texans, and many of them bore the scars of many fierce conflicts with Indians and border ruffians. From the date of the organization of the Arizona Spy Company until the disastrous termination of the Sibley invasion of New Mexico in May, 1862, these Rough Riders of the border were almost constantly in the saddle. This is their story

Account details life experiences of David S. Switzer who was born in Spartanburg, S. C., in 1844, the son of Samuel Switzer. Switzer enlisted in the Confederate army when but little more than 16 years of age. He took part in some of the bloodiest battle of -the war and was three times severely wounded. After the Civil War, Samuel Switzer moved to Milam county, Texas, and in 1870 the son followed to the Lone Star State. In those pioneer days in Texas the Masons were taking an active part in education and had established a Masonic Institute at Round Rock, Williamson county, and David Switzer was elected principal of that school, and later in Comanche, Granbury, Weatherford, and finally Dallas, TX. The account describes conditions in pioneer school and teaching establishments.

Account of an event that occurred in In 1867 on the south bank of the Leon river in Hamilton county, TX when the daring of Miss Howard, a beautiful, intelligent young lady, scarcely 17 years of age, no doubt saved many lives by her bravery and by her incredible horsemanship. Here is the harrowing account.

(Editor's Note. -- Frontier Times readers have read a great deal in this magazine about Big-Foot Wallace, the famous Indian fighter of the Texas Frontier. His reminiscences have often appeared in Frontier Times. The following story is given in the old frontierman's own language and is partly facts and partly fiction. That Jeff Turner really existed and spent years of his life killing Indians in revenge for the murder of his family there is no doubt, as some of the early settlers knew him, and when he disappeared from the Southwest Texas range is was supposed that he had been killed by the Indians. The account of his horrible death, as related below, was taken from Edgar Rye's book, "The Quirt and the Spur," and is published for just what it is worth. We cannot vouch for its truthfulness, but it offers the answer to the question often asked on the frontier in those early days: "what became of old Jeff Turner." We believe it contains an element of truth.)

This account is the story of Thomas Sieker, of Dallas, as related to W. S. Adair, and published in the Dallas News in 1929. Mr. Sieker was a brother of two of Texas' outstanding Rangers, General L. P. Sieker and Captain Ed Sieker, early residents of Menard county.