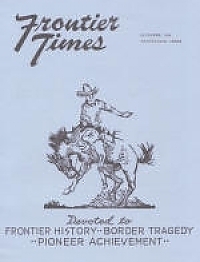 Account of life and experiences of one of the first white men in Parker County. His name was Pleasant Tackett - a Methodist preacher and the leader of 15 families seeking locations in those parts. In addition to the difficult and dangerous task of opening a home for his family in this new country, Mr. Tackett, preached in the homes of scattered settlers. On one of these trips riding a mule he was chased by Indians and was shot in the foot with an arrow. He reached down, pulled the arrow out, and used it to increase the mule's speed. Here is his story.

Until 1875, a vast region to the north and west of Coleman county, had no white settlers; and the few settlers in Coleman, Brown, San Saba and adjacent counties were subject to bloody and costly raids. No man could leave his frontier home without absolute assurance that it would not be destroyed, his wife and children tortured and killed, and his stock stolen and driven away by raiding bands of Comanche Indians. One of the first ranchmen to settle in this region was J. W. Nunn who located in Scurry county. He came out to the west in 1876. Here is his story.

Account of general Benjamin Harrison Grierson. He is perhaps as little known as any man could possibly be who had a heavy hand in "civilizing" the Texas frontier of the 1870's. His name is bitter-sweet to a good sized portion of the Old South. For he is the Union officer who conducted "Grierson's raid" through Louisiana along toward the close of the War Between the States—a devastating march of Northern troops, ordered by Union generals as part of their military strategy. But Grierson's memory perhaps deserves better than that epithetic spot in history, for he it was who put the finishing touches to the 30 years war of the white man and Indian west of the Pecos. Here is his story.

“Back in the early 80s when the area was reputedly unruly and wild, young Taylor county erected a strong-box for cattle rustlers, two-gun men and fugitives from justice. It still stands but occupies a more peaceable niche in the economy of the county—now a residence. The structure is unique in that its big, red sandstone blocks are mortised and joined with small cannon-balls which probably played a lethal part in the War between the States back in 1861-65.”

“There are possibly not more than half a dozen persons still living here who could either question or corroborate my statements, but one thing I can assure you, even in that early day Coleman had its rare attractions. I know, for I have been a resident for 61 years—have moved but once and then only a few blocks—so I am indeed an "eye witness." The people were big hearted, accepted all strangers, giving them the opportunity to show their worth —that was the prevailing spirit "out where the west begins."

In January 1883, coming from Kentucky to Texas, seeking a home in this new country, my husband was lured by the tales of this place. So he came to see. Coleman was not yet on the map but he could visualize the possibilities. So he located here.”