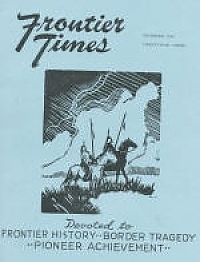 Captivity and Ransom of Mrs. Box and Daughters

Written by Judge I. D. Ferguson, of Denton, Texas

This account describes the captivity and ransom of Mrs. James Box and her daughters, by the Kiowa chief, Satanta, which occurred in Montague county in the fall of 1866.

It would have been a mercy to those poor captives had they shared the fate of the husband and father. The Indians, fearing pursuit, travel-led all night. The infant babe, being but a few months old, and getting chilled by the cold night air, and hungry and tired from the long nights ride, became fretful and began to cry. The Indians, no doubt, fearing that the voice of the crying child might be heard by pursuers, reached to take the babe from the mother, who, with pleading eyes and trembling voice and tears streaming down her face, said : "Please don't kill my baby," but notwithstanding the mother's love for her child, a savage brute jerked it from her, and swinging it around by its feet, dashed its brains out against a tree, and thus stilled the little infant voice in death, threw its quivering body into the wild woods and moved on. The mother cried out in wild agony...”

“There are no words in any language that can describe the awful tortures and sufferings, in body and mind. of this poor, unfortunate family. They remained captives among the Indians for nearly two long years, during which time the eldest daughter, a beautiful girl just blooming into womanhood was exposed to a fate more horrible than death. She first fell to one of the principal chiefs, who, after robbing her of that which was more precious than life, forcing her to become the victim of his brutal lust, he then sold her to another chief for two horses; he, in turn, after wearying of her, traded her to a chief of another band, and in this way, says General George H. Custer, "this unfortunate girl was passed from one to another of her savage captors undergoing a life so horribly brutal that, when meeting her upon her release from captivity, one could only wonder how a young girl, nurtured in civilization and possessed of natural refinement and delicacy of thought which she exhibited, could have survived such degrading treatment."

The Hanging of John Childers

Account details the hanging of John Childers, a half-breed Cherokee Indian, charged with killing a peddler named Rayburn Wedding. Childers was a son of John Childers, a white man, and Katy Vanne, his Cherokee wife. He was born on Cowskin Creek, in the Cherokee Nation, May 3, 1848, being a little past 25 years old on August 15, 1873, his last day on earth. Here is the story.

An Overloaded Piece of Artillery

Account of Mr. and Mrs. John Burleson, a fine old pioneer couple, of San Angelo. They were early settlers of Brown county, having lived on Dowdy's Creek, near Brownwood, in 1872, where they had many harrowing experiences with the Indian raiders in that section. One incident that is recorded in this account describes what happened when in haste, Mrs. Burleson double loaded and rammed her husband firearm and the resulting near-tragedy.

An Old Letter About Texas

This account describes an interesting and detailed old letter written from Bastrop, Texas, in Nov. 8, 1850, by James E. Whipple, a pioneer preacher of the Gospel to a friend in Illinois. It is a good description of Texas at that time.

The Tacket Fight in Young County

“The first pioneer preacher in Young county was Old Father Tacket, as he was familiary called. He was of the Methodist creed. He moved his family on Boggy creek, in the western portion of Young county. On the fifteenth of January, 1859, about ten o'clock in the morning, one of his cows came up alone. He though it was strange that she would leave the bunch, and, upon examination, found an arrow sticking in her neck. He and his three sons, Jim, George and Lycurgus, arming themselves, each with a shotgun and a sixshooter, took the back trail of the wounded cow, which they could easily follow, as the snow lay on the ground to the depth of several inches. They followed the trail for about two miles, where they found the remainder of the herd at the foot of a very rough hill, to which the present occurrence gave the name of "Tacket Mountain." Not daring to follow the red-skins into such a place, they rounded up their little bunch of cattle and started home. The Indians, observing them from the summit of the mountain, concealed themselves in a deep gulch which headed there, and, running to where the path crossed it, they lay in ambush for their approach. The cattle became frightened at the crossing, and Lycurgus, thinking some wild animal was crouched there, cocked and presented his gun. At this moment the Indians sprang up, and Lycurgus shot the only one who had a gun. Eleven Indians more were left, and a general fight ensued.”