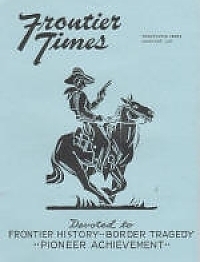 This is story of the town of Navajoe, TX which no longer exists. Yet, in its time Navajoe was a flourishing center of commerce with half a dozen stores and other business establishments, and the dwellings of a score or more of families. Its location was some fifty miles or so north of Vernon, Texas.

The Indian Raid In Young County

On October 13, 1864, about six hundred Kiowa and Comanche Indians came down from the Indian Territory and made a raid on the settlers located on Elm Creek in Young County, Texas where it empties into the Brazos River, about ten miles up the Brazos River from Fort Belknap. This is the eye-witness account of the author when he was seven years old.

“My father's name was John Brown. He was descended from old English stock, who settled in Baltimore, Maryland, in colonial days. Two of his ancestors, one on the paternal side and one on the maternal, were colonels in the celebrated Maryland line of the Continental army. One who was a captain fell at the River Raisin. My people have ever been among the defenders of our country.

My father was born in Madison County, Kentucky, September 9, 1796. About 1820, while he was living in Missouri, he married Nancy Ann Howell. Two or three years later he returned to Kentucky, but in 1824 he went again to Missouri. It was perhaps in December of that year that in order to obtain relief from a bronchial trouble he had he started to Cuba. In New Orleans, however, he met his older brother, Captain Henry Stevenson Brown, who induced him to try the wilds of Texas. About the last of December they reached that country, which was then a part of Mexico and was inhabited chiefly by various tribes of Indians and abounded in wild animals of almost every kind.

Captain Henry S. Brown was a noted Indian fighter, and he also traded with 'the Mexicans. He furnished my father with such goods as suited the Indians and advised him to go towards the upper waters of the Brazos and barter his goods for horses, mules, and peltries. With the expedition went James Musick, Thomas Jamison, and Andrew Scott. They secured eleven hundred horses and mules and many peltries and started for the settlements. On the third night of their homeward journey, their camp was attacked by the Indians with yelling and shooting...”