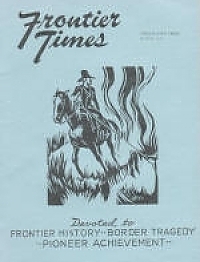 The following sketch of Clay Allison, famous as man-killer, was written by Edward B. Bronson author of "Cow-boy Life on the Western Plains," and "The Red Blooded Heroes of the Plains," and is a true record of the most feared man of the Washita. This story presents it just as Mr. Bronson wrote it.

“Clay Allison was in no sense an assassin. I never knew him to kill a man whom the community could not very well spare. While engaged as a ranchman in raising cattle, he found more agreeable occupation for the greater part of his time in thinning out the social weeds that are apt to grow quite too luxuriously for the general good in the new Western settlements. His work was not done as an officers of the law either. It was rather a self-imposed task, in which he performed, at least to his own satisfaction, the double functions of judge and executioner.”

The Atascocito Trail, established around 1770 extends across Texas in a huge quarter circle, from old settlement of Atascocito, with Matamoras, Mexico, by way of Refugio, Goliad, San Felipe, Liberty, Columbus, Humble and Orange, to New Orleans, Louisiana. Here is the account.

Story of a Harmon Made Saddle

The Harmons, of Liberty, were pioneer settlers and started making saddles in the 1850's. The trees were carefully hand-made, as well as the whole saddle. For comfort and good use, for both the rider and his mount, they were unexcelled and became very popular, well liked by men riding the range in both East and West Texas.

This is the sad account of one of those saddles, made empty by mistake, by the sudden and untimely death of its owner - John Maton.

The Magee-Gutiérrez expedition occurred in 1812-13 at a time of growing unrest in Mexico against Spanish rule.

“This period was auspicious for revolutionary adventures. Leading spirits were not wanting and Texas offered an inviting field. Owing to reverses sustained by the republican armies in Mexico, fugitives often took refuge in Louisiana. Among these was Bernardo Gutierrez de Lara. With him as nominal commander ( a position given him in order to win Mexicans to the cause) Magee conceived the project of revolutionizing Texas, wresting the Province from the Spaniards and establishing an independent Republic. He resigned his office as Lieutenant in the United States army, collected what men he could from the neutral ground, Nacogdoches and Louisiana, and, having perfected his plans by July, 1812, took undisputed possession of Nacogdoches, where he remained recruiting until the following September. Then, with about three hundred men, he took the La Bahia road and crossed the Trinity below Robbins Ferry. From the time of the treaty between Herrera and Wilkinson (November, 1806), making neutral ground of the country between the Sabine and the Arroyo Honda, until 1812, the neutral ground had been acquiring a population of a character that made it necessary to guard traders and especially mule trains passing to and from Louisiana General Overton kept a force at Natchitoches for this purpose, and it found plenty to do In the United States service at this Post, was First Lieutenant of Artillery Augustus W. Magee, a native of Massachusetts, and graduate of West Point (class of 1809), a man of undoubted courage, high-minded and honorable. Magee was sent at one time to aid the civil authorities in arresting a band of robbers rendezvousing in the neutral ground. He succeeded in effecting the arrest of about twenty-five members of the band. To compel the prisoners to reveal the whereabouts of their uncaptured comrades, he had a number of them soundly flogged but they stoutly refused to divulge the desired information. Here he remained awaiting reinforcements until October, and then marched directly on La Bahia. Crossing the Colorado near the pre-sent town of Columbus, the advance guard learned from a Mexican (a resident of La Behia) who was arrested as a spy, that Governor Salcedo and General Herrera were at San Antonio in full force. The Mexican proved not to be a spy, and afterwards fought bravely in the American ranks. Arriving at La Bahia on the 1st or 2nd of November, and finding the town vacated, the invaders immediately began fortifying and preparing the place for defense. They found in the town but one cannon, an old nine-pounder, which they managed to mount on one of the bastions. On the 7th day of November they found themselves suddenly surrounded by Spanish troops, with Salcedo and Herrera commanding in person.”

Noah Smithwick, author of "Evolution of a State"

The account details some of the events that occurred during the early establishment of the Texas Rangers during the crucial years of1836-1839.

It is a unique honor when one can say "my ancestors fought in every American War and in every major battle fought on Texas soil." Bettie Joe Kuykendall, 18, senior student in the University of New Mexico traces her ancestry right back to Texas first pioneers and beyond that to America's pioneers. She is a direct descendant of the Kuykendall, Carruthers and Pierce families who were among Stephen F. Austin's first colonists and they settled along the Colorado River in Texas. The three families became related through marriage but the men folk had been fighting for many years, not among themselves but for the country they adopted. Their lives touched in many unique ways not only Texas but America as well. Some of her relatives were in the receiving line when Columbus arrived. Here is the story.

An English Woman Tells Of Texas

Recollections of an early voyage from Britain to Texas made by Mrs. M. C. Houstoun. The voyage was begun on the 13th of September, 1843. and their destination was the Gulf coast of Texas, where they arrived at Galveston Island about December 18, 1843.

Account of Owen P. White, first Anglo-American born in El Paso, and the son of El Paso's first physician, who provided illustrative written pictures of the El Paso of the period in his works such as Trigger Fingers, Lead and Likker. Out of the Desert, Them Was the Days, My Texas 'Tis of Thee, and other books and countless magazine articles.

Early settlers of San Saba county are detailed in this account.

Autobiography of a Ballad Hunter

"Adventures of a Ballad Hunter," by John A. Lomax, Macmillan Company.

John A. Lomax, founder of Texas Folk-Lore Society in 1911, has in search of songs come closer to the heart of America than almost any man of our times. Account Account Mentions: born in Goodman, Mississippi * Professor Barret Wendell * Professor George Lyman Kittredge * the Carnegie Foundation.