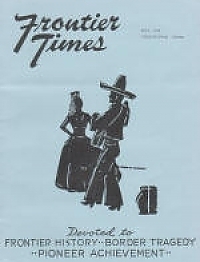 The Mormon's First and Last Drive

In the spring of 1873, J. A. and T. E. Van Ness, brothers and Texas cattle dealers, made a sale of 30,000 head of cattle to the Mormons of Salt Lake City, Utah, and agreed to deliver them to the Mormons the following summer. The Mormons took delivery of the cattle and proceeded on their drive to Salt Lake City – their first and last. The venture proved very unprofitable for the Mormons, as they managed to get through to Utah with only a few thousand of the original 30,000 head of cattle. They never made another attempt to purchase Texas longhorns. Here is the story.

The following story was given us some twenty-five years ago by J. T. Hazelwood, who was then living at San Angelo. In this sketch Mr. Hazelwood tells of the real pioneer life in early Texas. He came to Texas with his family in 1852 settling first in Panola county, then in Palo Pinto county, settling on Eagle Creek, west of Palo Pinto, and finally in 1860 to Stephens county, near the line of Shackelford, settling on Sandy Creek, and then on Battle Creek.

This story is an address delivered by Colonel H. M. Henderson, USA, Retired, before the Texas Landmarks and Historical Association at the Blue Bonnet Hotel, Thursday, February 13. 1947.

The Capitol of Texas

“It was my privilege to know Sion R. Bostick, who participated in the Battle of San Jacinto, and was one of the captors of Santa Anna. Mr. Bostick, who lived in San Saba, county, Texas, and died there in about 1905, often visited in our home in Mason, and I have heard him relate the details of the battle which freed Texas from Mexican tyranny. In 1915 Honorable Joe F. Brown, of Cherokee, San Saba county, gave me a copy of an affidavit made by Veteran Si Bostick, who was then 82 years old, and had a clear recollection of the battle.” This affidavit is given in this story.

The Trail of Blood in Bandera County

Account describes some of the early settlers and their hardships that occurred in Bandera County. It especially focuses on The Killing of Jack Phillips, Rufus Click's Escape, The Killing of Thomas Click and The Killing of David Cryer.

About the first thing the United States Government had to do in Texas after the Mexican War was to make some arrangement for permanently protecting the border against wild Indians. For this purpose a line of forts was established along the border and from San Antonio north to the Red River. Here is the story.

Account of Col. Jeff D. Milton, one of the most noted peace officers of the west. He served with the Texas Rangers, as a deputy sheriff in New Mexico and Arizona, as chief of police in El Paso, as a Wells Fargo messenger, as a customs inspector and border patrolman and as a U. S. Deputy marshall. His entire early life story became a part of the saga of the taming of the lawless frontier.Mentions: Mrs. Mildred Milton, Dr. N. C. Bledsoe , Carson Morrow , the Congregation Church with Dr. Ronald Bridges , J. Evetts Haley, of Canyon, Texas , Marianna Florida , Sylvania , Huachuca mountain ranch home , deputy sheriff in San Mateo county , St. Johns , President Cleveland , Tombstone , Fairbanks , Benson , Three Fingered Jack , Emma Goldman , the Soviet Ark , Gobernauer, New York , Pete Kitchen , Gov. B. B. Mouer.

The Hopi and the Rattlesnakes

This account examines the long-standing claim that the Hopi Snake Dancers are immune to the bite of rattlesnakes. In seeking to find grounds for or against this clam, the author consulted Dr. J. Walter Fewkes, who was the chief of the American Bureau of Ethnology at the Smithsonian Institution on the subject. Having advanced knowledge of the Hopi, he suggests certain possible explanations of their immunity to the bites.

The Old Prospector in the North American Continent

Account describes the traits of the Old Prospector, that real pioneer of the Western plains and mountains of this North American continent—that lone human, whose visions of fabulous wealth at the end of the rainbow lured him on to seek the gold at the risk, and often the cost, of his life and to endure great hardships. To him, primarily, must be given the credit for breaking the trail that has resulted in the population, civilization and wealth of the northwest of the North American continent, since its discovery by the Europeans so long ago. Here is the story.