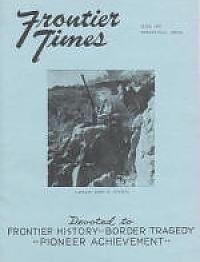 Account of Captain John R. Hughes, a banker who also served 29 years in active service as a Texas Ranger from 1887 to 1915, and was a captain for 22 of those years. Here is his story.

The Longhorn Hits His Last Trail

Blazing The Cattle Trails Through Texas And Indian Territory

Following the Civil War a revival of the cattle business was swifter than that of any other industry. In the late sixties and early seventies many poor, but enterprising, cowmen collected and branded the half-wild cattle that ran across the mesquite and buffalo grass on the Texas plains. These cattle multiplied until millions of mavericks, it is estimated, roamed the deserted ranges. It was but a short time until men who engaged in the cattle business were ready to supply an enormous quantity of beef to the Northern markets. The fact that war-time prices prevailed in those markets for some time after the war, gave a decided impetus to stockraising in Texas. But there arose a serious question as to transporting the animals to the Northern markets. This story describes the enterprising drivers and trails of those early years.

Account of George Scarborough, U. S. Deputy Marshal and Pioneer who was killed by outlaws while in the line of duty. For a time he had been employed by the New Mexico Stockraisers' Association to run down and bring to justice a well organized bunch of cattle thieves that were operating in Southern New Mexico. Here is his story.

In addition to the line of United States forts established in Texas following the Mexican War, whose history was sketched in last months article on early Texas forts, was a second line whose route also formed an important early roadway. These forts had colorful stories, and over the road passed many men famous in the history of Texas and the Nation.

Bandera Pass, in Bandera County, adjoining Bexar on the west, was doubtless used by the Indians centuries before white men ever come to Texas. In the early Spanish days it was through this pass that the Comanches poured down from the north when they made their raids on the missions around San Antonio. It was recorded that in 1733 General Bandera here defeated a large body of Apaches and it is believed that a peace was made with the Indians based on the understanding that the white men would not go north of Bandera Pass and that the Indians would not come south of this pass. Here is the story.

The Story of Squanto

“The story of the Indian Squanto who came to the aid of the Pilgrims at Plymouth at the time of their direst needs in the early spring of 1621 parallels in some of its important details the Biblical story of Joseph, who was sold by his brother to a trading caravan on its way to Egypt. But the story of Squanto is seldom told in its entirety. To get the setting for this remarkable drama one must go back several years before the time the Mayflower rounded Cape Cod with its resolute but poverty stricken cargo of human freight.” Mentions: the Plymouth Company employed Capt. John Smith, of Jamestown * the London Company * the Plymouth Company * Captain Thomas Hunt * John Smith * Capt. Dormer * Squanto belonged to the tribe of which Massasoit was chief * the powerful Narragansetts * Samoset *

The ills of the past are to be forgotten and the cruelties of white man and Indian are to be expunged from the account book. The United States has received the last recalcitrant red man to the benefits of its progress and civilization.

History records no bloodier annals than the war against aborigines of the Floridian interior. Not even the rapacious Sioux in the heyday of Sitting Bull surpassed the Seminoles in their frantic efforts to throw back the advance of the white man. Aided by almost impassable swamps, able to descend upon isolated settlements and complete their depredations before the white man could strike back, the Seminoles long constituted a source of extreme annoyance to the Government. Spaniard, Frenchman and Briton had each tried his hand at the subjection of this troublesome tribe and each had been forced to retire with at best only the consolation of a temporary victory. This account details the time when the Seminole Indians of the Florida Everglades, finally "came to terms" when Chief Tony Tommy and 300 of his tribesmen expressed a willingness to become American citizens.

Quanah Parker, Chief of The Comanches

Quanah Parker, who became chief of a branch of the Comanche tribe, was one of the most remarkable Indians that ever lived. For a time he made war on the whites, because he was an Indian, and he felt that the white man was his enemy. I have known several men who knew Quanah well, and they all praised him as a most just and high-minded man. One man who admired him most was Herman Lehmann, who was captured by the Indians when he was a small boy, and grew up among the savages, he himself becoming a wild Indian, but was later restored to his people and became re-civilized. Herman Lehmann was with the tribe when Quanah and his people went on the reservation to take up the white man's ways, and he stated to me that Quanah had often warned his people that the doom of the Indian was at hand; that the best thing they could do was to yield to the superior race and become peaceable children of the great White Father at Washington for the buffalo were gone, and their wild free life was over.

All through the life of Quanah Parker is found evidence of a dual existence led by the man through whose veins the blood of a proud white family and the wild blood of the Indian were intermingled. This strange blending of the blood of two naturally hostile races produced a character the like of which the world has never seen. He was, as will be revealed later on in this article, both stern and relentless while, at other times, he was gentle as a woman.

Beating Back The Red Warriors

In this article, Mr. J. M. Hallcomb of Ozona, Texas, relates the account of an Indian raid into Coleman County, Texas, during frontier days and the killing of Burrell Brown in the year 1868.

While the music of the American Indian is not, as often suggested, a part of American folklore music, it is nevertheless the oldest form of musical expression known in America. Existing before the coming of the white race, it was crude and primitive and barbaric when first heard and primitive it has remained, in spite of the influences of the Jesuit missionaries and the secular forces of civilization. But the charm of Indian music surpasses its musical content, and has long challenged the greatest composers to the harmonizing of its thin, sweet melodies and insistent rhymes. Here is the story.