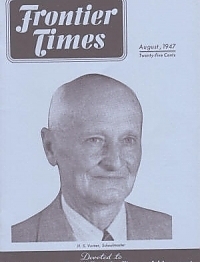 Account describing the life of H. S. Varner, of Cottonwood, pioneer school-master who spent almost 48 years teaching in Callahan county, TX rural schools. Mr. Varner taught his first term at Pilgrim, fourteen miles west of Cross Plains, in 1891. From Pilgrim he went to Cottonwood in 1892 as an instructor in Yonley's Polytechnic Institute, and although he taught at times in nearly every early-day school in the county, more than 30 years of his teaching experience has been spent in Cottonwood. Here is his story.

This article describes the rise and fall of the San Saba mission, one mile above the present town of Menard, on the San Saba river. There is much documentary evidence that such a mission was established, and this account cites such eminent authorities as Morfi, Bancroft, Bolton, Yoakum, and other historians who searched Spanish records in Spain, Mexico and Texas to bring to light the facts described here.

The author of this account, Frank S. Hasting, was for more than thirty years manager of the great S. M. S. Ranch near Stamford, Texas, and was known and highly esteemed by the ranch hands and cowmen of West Texas. Here is an eye-witness account of the story of Little "Curley" McNutt, who went missing at age four, and the desperate attempts to discover his whereabouts. Also Mentions: the Tongue River Ranch , `Molly' O'Hare, the horse wrangler.

Account of a bloody raid in 1882 when the Indians struck their last blow at the settlers in Main Frio Canyon. For more than thirty they had made constant raids and many whites were slain, and in this last two more victims fell — Mrs. Kate McLauren and Allen Lease, a youth who lived with the McLauren family. Here is the story.

Account of three old rangers responded to the call and lived up to their motto "To The Last Man," at the reunion in the Ranger's Memorial Hall at Santa Anna, Coleman County, on August 4th and 5th, 1947.

Account of the activities of D. H. Palmer, who went to school at West Point Military Academy after his father tried to fashion some sort of elementary education for him. His last college work was taken at the old Bevans Institute in San Marcos, where the scholar received a diploma equivalent to our present law degree. Upon graduation Mr. Palmer practiced law for seven years, during which time, he experienced the call into the ministry. Though the call was serious enough for him to maintain a way of life from it, he explains his reason for withdrawing from a legal career as "I was afraid I would learn to tell a falsehood." Here is his life story.

Account of the incident that occurred on the ranch of Otto Schauer in Irion County, on Rockey, near the line of Tom Green, about 28 miles from San Angelo. It was then that Sheriff Shield proceded to arrest Otto Schauer and Sam Murray, on a warrant that had been issued in Irion County charging them with the murder of Ben Cole. Here is the detailed account of that event.

Account of Wild Bill Hickok who was not killer in the same sense as Willie Bonney, otherwise Billy the Kid, for he was neither a desperado nor a had man. While Wild Bill had, as they say in border literature, forty notches on his gun—a dead man for every year of his life—he never shot to kill except in the exercise of duty or in self-defense. He had amazing success in killing instead of getting killed. This luck has been attributed in great part to his well-nigh unbelievable speed in drawing and to his accuracy in firing his pistols. Here is his story.

Account of the days when the red plague of smallpox walked rampant down the streets of San Antonio during the 1880's.