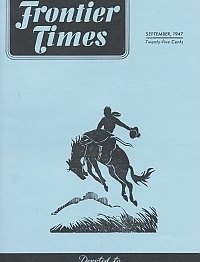 George W. Kendall, who founded the New Orleans Picayune in 1837, came to Texas in 1841 to accompany the ill-fated expedition to Santa Fe, New Mexico, and was captured by the Mexicans and marched afoot, 2,000 miles, to Mexico City, where he was thrown into prison. After his release from a Mexican dungeon, returned to New Orleans, and after the war with Mexico, he came to Texas to live, and engaged in ranching only about twenty-five miles from Bandera, in what is now Kendall county, that county being named for him. This account describes the Santa Fe expedition, and gives Mr. Kendall's reasons for accompanying it.

One of the most romantic and tragic stories of Texas history was enacted on a quiet little spot in Foard County at the mouth of Mule Creek, a sluggish little stream flowing into Pease River, nine miles northwest of Crowell. Under the towering cottonwoods of this picturesque setting, Cynthia Ann Parker, a memorable name in Texas frontier history, played the leading role in one of the most thrilling dramas ever related in history or fiction. It was then that little Cynthia, a 9-year old girl, was lost to civilization, following the massacre of her family and kindred by the Comanche Indians at Parker's Fort on the Navasota River, May 19th, 1836, near where Groesbeck, Texas now stands. The plot to this human drama thickens with the re-turn of the Comanches to their Mule Creek village with their white captive, who later became the wife of the Comanche chief, Peta Nocona. Here is the story.

Days of Free Range in Texas

Account of C. F. Clardy, early Texas pioneer of Brownwood and his experiences in the days of free ranging cattle on the Texas frontier. Mentions: was born in Bedford county, Georgia, in 1848 , Murfreesboro, Tennessee , John L. Clardy, N. M. Clardy., and A. R. Clardy , the Todd Mill at Dallas , Farmer's Branch , Brinkley, Arkansas , Eagle Ford , the Texas and Pacific railroad.

When Freight Was Hauled By Oxen

Account describes the early-day traffic between San Antonio and Mexico, when freighting was done with Mexican carts drawn by oxen. “These carts had no metal. Wooden pins and throngs of rawhide held them together. They had two wheels, about seven feet high. A live-oak or pecan tree was used for the axle. After a cart had been in use for some time it wobbled and made a frightful screeching noise. To lubricate it, prickly-pear leaves were crushed on the axle...”

Account of the 1863 battle between the Kickapoo Indians and Army soldiers. It was a fight which might properly be termed a victory for the Indians. They really won, although they did not realize it and retreated when they might easily have scored a repetition of the Custer massacre on the Little Big Horn, if they had only followed up their military advantage. Here is the story.

1867 Account of a battle involving Jim Ketchum and his party who were driving a large herd of cattle for New Mexico and some roaming Comanches. It was a brutal slaughter ending in the death of Ketchum and his men who were holed up in a small arroyo and who fought bravely to the last man – here are the details.