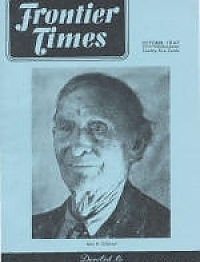 This is the first-hand account of the life of Samuel Houston Gilliland, when he was in his 89th year, as related to the author. Gilliland speaks of the old days that he knew so well and his keen remembrance of the settlers he knew, and his description of conditions that existed in Callahan, Coleman and Brown counties, when these counties were on the extreme frontier.

Bowie's Battle On The San Saba

“On Calf Creek, in McCulloch county, about half-way between Brady and Menard, there stands a marker, placed there by the State of Texas, proclaiming to the world that at that spot there was fought a battle between James Bowie's party of 11 men and a band of Indians, in 1831. For years there was ample evidence that a great battle had been fought there, but it seems that somebody has made a blunder in designating the spot as the place where Bowie and his men fought in 1832. I have been on the battle ground, and saw traces of a great battle, particularly a low wall of stones which evidently protected the besieged, but I have never been convinced that this was the battle described by Rezin P. Bowie, related by him to Mrs. Mary Austin Holly, and printed in her book, "Texas," published in 1836.”

Matthew Doyal, who died at Mason in 1888, was with Bowie on this expedition, and was wounded through and through with a rifle ball in the battle. He often visited in our home in Mason when I was a small boy, and I have heard him relate incidents of the fight, and he stated that it took place on a creek about four miles east of the old Spanish mission, San Saba. Doyal spent the last years of his life searching for the "Lost Bowie Mine."

“One of the most interesting products of the Southwest, during its pioneer days, was the Texas Ranger. To tell all that is worth telling about this type of man would about fill a good-sized volume; and all this article can hope to do is to confine itself to the subject generally, and relate briefly a few of the adventures of the Texas Ranger, during the interim of 1874 and 1880.”

The Lost Nigger Mine

Much has been written about the "Lost Nigger Gold Mine," which is supposed to exist somewhere in the Big Bend country, below Alpine. Here is the account by Carlysle Graham Rath.

The Contest Between Civilization and Barbarism

Nowhere has this perpetual conflict been waged with more bloodshed and atrocity over a longer period of time and with as many varied rivals as in the State of Texas. This story explains and focuses especially on the Tarrant county and Fort Worth area.

Colonel James Buckner Barry, better known to early Texans as "Buck" Barry, was one of those intrepid Texas Rangers, who before, during, and after the Civil War, became famous for his valor in defending the frontier and was noted for his high individual courage in all times of danger. He died at his home in Walnut Springs, Bosque county, at the ripe age of 87. Here is his story.

“It would not be apparent to any-one driving along the country road leading from the ancient village of Bluntzer, up the west side of the Nueces River, that they were near the ancient capital of the Lipan Nation of Indians; but the site is less than a mile to the east of this road, and near the bank of the river. This village bore the name of Lipantitlan.” Here is the story.