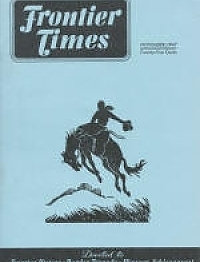 George W. Kendall, who founded the New Orleans Picayune in 1837, came to Texas in 1841 to accompany the ill-fated expedition to Santa Fe, New Mexico, and was captured by the Mexicans and marched afoot, 2,000 miles, to Mexico City, where he was thrown into prison. After his release from a Mexican dungeon, returned to New Orleans, and after the war with Mexico, he came to Texas to live, and engaged in ranching only about twenty-five miles from Bandera, in what is now Kendall county, that county being named for him. This account describes the Santa Fe expedition, and gives Mr. Kendall's reasons for accompanying it. (Second Installment).

During the Mexican War, one of the incidents of the invasion of Mexico which caused much criticism and condemnation of military authority was the hanging of some Irish deserters and the lashing of others. Here is the account of the punishment of the deserters, known as the San Patrician Battalion.

In the 1850's it required thirty days steady travel, day and night, by coach for a letter to reach San Diego from San Antonio, and that was considered quick time. When the San Antonio-El Paso link in the chain of mail routes which crossed the continent was welded, the first contract was awarded to Henry Skillman. The initial run was made with six wild mules and a Concord coach, guarded by a party of eighteen well armed, mounted men under the captaincy of the famous Indian fighter, Big Foot Wallace. This run required thirty days to cover the distance of six hundred and seventy-three miles to El Paso, due to the fact that only daylight runs were made, and there was no equipment for the various stations along the route. It must be borne in mind that the whole distance was infested by hostile Indians, and that these mail parties faced the ever-present danger of attack by superior numbers. The contract called for three mails a week, each way; but until after the Civil War no more than one mail a week, each way, succeeded in reaching the terminals. Here is the story.