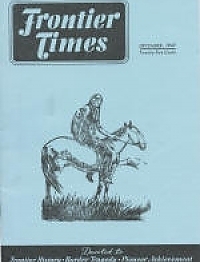 Account of Colonel Robert M. Coleman, for whom Coleman county is named. "`Colonel Bob," as he was affectionately known to early Texans, because of his tireless efforts to protect them, was born in Kentucky, son of James and Rebecca Coleman. With his wife and several children, he came to Texas with Austin's first colonists, making his home about four miles north of Mina, now Bastrop. He was a ruthless Indian fighter, and when the Ranger service was established, he was the logical person to lead them. Colonel Coleman was among the signers of the Texas Declaration of Independence, served as aide-de-camp to Houston during the Texas Revolution and won distinction at the Battle of San Jacinto. Here is his story.

Account describing the efforts made to bring take Indians into civilization by means of the reservation system. The effort was doomed to failure from the beginning. This is the story.

Account of W. C. Redman, known generally as Columbus Redman, West Texas a pioneer printer, who engaged in the weekly newspaper business in different towns, and was a factor in the development of those towns.

The story of the life of William Hickman Dunman and many of the letter he wrote during the years that he served as a member of the famous Frontier Battalion.

Extermination of The Buffalo

“The best friend the Indian had was the buffalo. The two disappeared from this history together. When the plains contained only the whitening skeletons of the herds that once roamed in uncountable numbers from the Rio Grande far north to the Dominion of Canada, the Indian had no incentive to draw him away from his reservation and mark his hunting expedition with trouble and depredation for the whites.”

The Battle of Agua Dulce

Five miles above Banquete, near the banks of Agua Dulce Creek, in northwestern Nueces county, lies the site of one of the little known battlefields of the Texas Revolution. It is true that it was only a minor skirmish, when considered by the number of men engaged, but it was one of the deciding factors in the outcome of the Revolution. Here is the story.

This is the account of the devastating yellow fever epidemic as it reached Texas in 1867. Its disastrous effects were multiplied in consequence of the fever epidemic having extended to many interior towns of the State, which prior to that time had been deemed entirely safe from such a visitation. Here is the story.