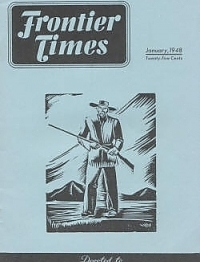 The Beginning of Civilized Texas

“The story of Texas begins with the time when the first civilized man beheld its low-lying shores from the blue waters of the gulf, or for the purpose of exploration or in quest of habitation and settlement set foot upon its soil. It is true, for centuries the caravals of Columbus set forth toward the unknown occident, the wild roving tribes passed and repassed over what we now know as Texas, setting up their beehive huts on the broad prairies or in the shade of the woodlands, rudely scratching the fertile soil and planting and harvesting their crops of grain, hunting with bow and arrow the shaggy buffalo. or spearing and netting the abundant fish, and marauding and making war on their near or distant neighbors. They had their joys and their sorrows, their loves and their hates; among them were degrees of skill and stupidity; they recognized that some must command and the rest obey; and mingling with the few realities was the thread of the mysterious, the awe and terror of the overpowering elements about them, and a certain faith or superstition concerning their fate after death." In other words, the Indians existed...”

The Sublime Courage of a Frontier Boy

Account of the bravery of young Harve Putman, son of Captain Cal Putman who came to Texas in 1821, and with his family settled on the San Gabriel, in what is now Williamson county, but later, in the 1850s moved to Llano county and settled on Hickory Creek, near House Mountain. The story details the tragic Indian attack suffered by Harve and his father, in the fall of 1864 on the Leon creek, about 20 miles west of Mason and the courage with which the young boy handled this desperate situation.

In November, 1878, Company B, of the Frontier Battalion of Texas Rangers, was camped on the Concho river, 12 miles below Fort Concho, the present site of San Angelo, Texas.

"Black Horse," a petty chief among the Comanche Indians, obtained from the government agent, at Fort Sill, Okla., a permit for himself and his band of twenty-five braves to go on a buffalo hunt for a period of fifteen days during the month of December. At the expiration of this period Black Horse and his gang did not show up at Fort Sill and Colonel Cook of the United States Army, who was at that time stationed at Fort Sill, set out with a small body of cavalry to find the delinquent wards of the government and bring them back to the Fort Sill Reservation. This led to the battle described in this story.

Account of the sensational bank robbery that occurred at Cisco, TX on December 23, 1927. Who would have guessed what the false-whiskered Santa Claus who was striding along the west side of Avenue D, the main business street of Cisco, had in mind when he and three companions entered the First National bank?

Account describes earliest settlement and history of that portion of North Texas known originally as Peters Colony. As the result of an act of Congress, President Lamar entered into a contract, August 30. 1841, with W. S. Peters, D. S. Carroll, and eighteen others, for the introduction of six hundred families into Texas within three years thereafter. W. S. Peters being the person first mentioned in the article and the leading spirit in the enterprise, his name ever afterward attached to the colony. Here is the story.

Settling West Texas in the Fifties

Account describing John Sheen who left Parker county for Camp Colorado, in Coleman county. He had an ox-team, a wagon full of children, plenty of courage and faith in God. The journey had to be made through one of the wildest sections of Texas, where Indians claimed dominion and the right to murder and plunder at will; it was even considered a hazardous journey for a party of well armed men. But Sheen, an Englishman by birth, sought adventure and the opportunities of a bountiful frontier to provide for his loved ones. He reasoned that life was only a game of chance anyway and that it was as well to gamble it against savage tomahawks as to risk in with grim poverty. Here are his experiences.

Both history and tradition preserve the names of several tribes of Indians, which had become extinct, or blended with other tribes. Before the State was colonized by Angelo-Americans in 1821, the tribes with which the settlers came in contact were the Comanches, Wacoes, Towacannies, Ionies, Kechis, Lipans, Tonkawas, and Carankawas. The last named were the most remarkable. The men were of large stature, six feet high, and the bow of every warrior was as long as his body, and useless in the hands of a man of ordinary strength, but when bent by one of the Carankawas, it sped the arrow with deadly force two hundred yards. Much more about these noble warriors is described in this article.

During the busy period of the Revolution which began in 1835, the "Authorities" managed through the kindness of friends, in the early part of the year 1836, to pick up a small navy of three vessels, viz. the Invincible, Captain L. Brown; the Brutus, Captain Hurd; and the Independence, Captain Hawkins. The vessels were not idle, but were of infinite service to Texas in preventing the enemy from receiving supplies. Here is the story.

Account of the adventures of an American in Mexico - Ellis P. Bean, who in the year 1800, then a boy of eighteen, left his father's home at Bean's station, Tennessee, and reaching Natchez on the Mississippi, enlisted in the trading company of Philip Nolan, then en route for Texas. The company consisted of twenty-two men, having in charge a large amount of goods. Reaching Texas, and while at a point between the Trinity and Brazos rivers, they were attacked by a body of Spanish troops. Nolan and his men made a desperate resistance, but were finally overpowered. Thirteen, including Nolan, were killed, and the remaining nine, with Bean, made prisoners. The prisoners were taken to San Antonio, and there confined several months. Thence they were sent to Chihuahua, by way of Monclova, and there chained and imprisoned. Thus they were kept three years. Here is the story.