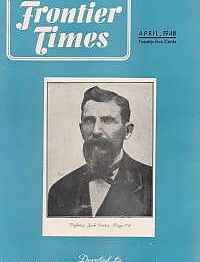 Some Early Settlements in Texas

Account describes the earliest settlers and settlements of the region originally designated as Castro's land grant which covered an area of several thousand square miles between the Medina and Nueces rivers, which bounded it on the east and west. The country within these limits lies among the foothills of the mountains, in Medina and Uvalde counties, and spreads out on the plains below. This is excellent early history and genealogy of the early settled regions to the west of San Antonio.

Chased by Indians Through Bandera Pass

This account is from the Runnels Record, a weekly newspaper published at Runnels, Runnels County, Texas, and from the October 11, 1884 edition. It details the massacre at Parker's Fort in 1836. It was in this raid that Cynthia Ann Parker was taken captive.

Account of Andrew Jackson Potter, the fighting parson, and an incident that occurred in Brackett, TX in 1884, while on his way to Fort Clark to preach.

Mentions: The San Angelo Standard * the town of Uvalde.