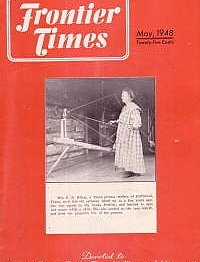 From the Texas Almanac, 1868. Account of Philip Nolan, of Irish origin, who became, through his numerous trading expeditions into early Texas, one of the most knowledgeable resources for what would eventually become Texas fight for Independence. He was probably the earliest white man to map Texas, and was engaged in trade and transport of Mustang horses from Texas to Louisiana. Here is a detailed account of his life and adventures.

One of the outstanding characters of the border in the 1860's and 1870's was John B. Omahundro, though in later years the fact that this was his real name came to be forgotten, and was known simply at "Texas Jack." At the age of seven he ran away from home and shipped as "general utility" boy on a sailing vessel bound for Australia. This voyage proved so delightful to the youthful adventurer that he remained at sea until he had developed into a seaman before the mast, in which service he visited nearly all the countries of the world, but in 1858 was wrecked off the coast of Texas, and, after a hard struggle for life with the angry billows, was cast upon the shore near Corpus Christi. After this experience, Jack resolved to remain a landsman until some desirable position should offer him an easier life. He was not long idle, however, for occupation was readily found among the large cattle drovers of Texas, which service soon introduced him to the wild life found only on the plains, and in which there was a congeniality and fascination peculiarly suited to his disposition. He became one of Texas' most renowned cowboys This is his story.

The name of Ben Thompson, killer, was known throughout Texas and the West in the 1870's and 1880's. For he was a killer of men, having slain more than thirty-five in gunfights, it is said. He was a stoutly built man of middle age and medium height, black-haired, black moustached, and blue-eyed. His complexion was rather swarthy, his expression playful, but not reassuring. His movements were quick and impressive. Thompson was reared in Austin, and worked there as a printer before the Civil War. He was born in 1843. Here is his story.

The trail driving period began in 1866 and continued until about 1886. During the twenty years following the opening of a cattle market at Abilene, Kansas, more than ten million cattle of the longhorn species were driven out of Texas, and brought great wealth to this state. This account details these times and tribulations. Mentions: the old Chisholm trail * Joe G. McCoy * Dodge City *

When The Polish People Came To Bandera

“Bandera county has a wonderful history. During the years that have passed since the first white people came to make shingles from the giant cypress trees that grew along the Medina river, history has been in the making. Many tragedies have been enacted, many privations endured, many dangers experienced during that long span of years from the beginning of Bandera down to the time when this ceased to be the frontier. Volumes could be written to recount the deeds of the daring, the thrilling experiences, the hardships, sufferings, the heroic achievements of the pioneers of this county, and still much would be left untold. It has been my privilege to know personally many of the early settlers of Bandera county, and from them I have gained, first hand, much of the history that has been made here. Among these early settlers was Mrs. Constantina Adamietz, who died at her home in Bandera a few years. ago, at an advanced age. In 1922, when I was gathering material for my "Pioneer History of Bandera County," I went to see Mrs. Adamietz and heard her relate the story of her long life in Bandera and the many changes she saw take place here. She was living in a house on Lower Cedar Street, on the site given to her by her father, John Pyka, Sr., who came to Bandera in 1855. In relating many of the events of those early days, Mrs. Adamietz was quick to remember dates and names, and at times she spoke with much feeling. Sometimes a tear would glisten as she recalled some pathetic incident, and at other times a hearty laugh would accompany her recital of a humorous anecdote.”

Her narrative, as it appeared in the "Pioneer History of Bandera County." is included in this article.

The Story of Judge Roy Bean

Roy Bean has been praised and maligned by writers in song and story; many fictitious stories have been told about him, as well as many true ones. For nearly a quarter of a century this stocky little fellow, not a gun man, not an imposing figure at all, was the undisputed ruler of an empire in West Texas as large as the New England States, minus Maine. "The Law West of the Pecos" was Roy Bean, and the only law Between San Antonio, 200 miles to the east, and El Paso, three hundred miles northwest, was the tiny town of Langtry, where he presided at the bar of justice and the bar of mahogany. He dispensed mescal and matrimony, whiskey and equity, practical jokes and practical jurisprudence. He was both salon and saloon keeper, mixing politics and potations in the standard old American formula.

The Bravery and Shrewdness of Frontier Women

The women of frontier days were not easily excited, and in times of extreme peril did not lose their presence of mind so easily as we of the late generation would imagine. They were quick to learn all the tricks, signs and wiles practiced by the Indians, and increasing vigilance sharpened their sense of sight and hearing. These and other admirable traits as well as afflictions of pioneer Texas women are here described.

Praying For Rain In Bug Tussle

True account depicts “when it hadn't rained in the Bug Tussle community in three months. Creeks, branches, and even old time springs with few exceptions had dried up, and people were having to haul their drinking and cooking water several miles. The Attoyac and Angelina rivers were both dry as a powder house, and the thirsty cattle had made trails in the bed of the streams.

All signs had failed. Here and there snakes had been killed, and turned on their backs, the tree toad had quit singing its plaintive song and retired from business, nowhere was there sign of the earth worm, coming to the surface at night. The air was parched, and hot winds swept through the dismal and sun-scorched woods. Cotton was dead in the field, and corn had dried and withered to a frazzle, long ago, before it got to be knee high. Thus matters stood when several neighbors met at Wes Morton's store, that stood at the crossing of the Nacogdoches and Briley Town road and the road that ran from Henderson to the town of Homer...”

The Babe of the Alamo

This account, (from the old Field's Scrap Book), is primarily material extracted from speeches delivered in the House of Representative of Texas, on a bill proposing a donation to the daughter of Almiram Dickenson, one of the martyrs who fell at the Alamo in the beginning of the Texas Revolution. History will never record a nobler deed, a more daring stand, a purer, self-sacrificing devotion to the interest and liberties of their adopted country, than the fight and fall of Travis, Bowie, Crockett, and their gallant compatriots.

Child of the Concho Frontier

“As the sentry's cry of "All's well!" echoed through the stone barracks and across the courtyard to a little rock house just within the confines of Fort Concho, little eight-year-old Mary relaxed for sleep. It was wonderful to feel secure. She couldn't recall a sensation quite like it. But even as she hugged the feeling close to her, she wondered how long it would last. Would it, for instance, still be hers in their little new house that her father was building just across the river? Mary Tankersley was a child of the West Texas frontier and, being in a country infested by Indians, had been taught to be on the alert...”