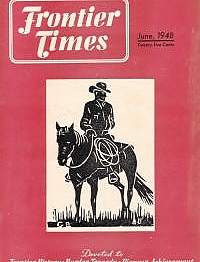 (As told to Gertrude Harris Cook)

Account of “Grandmother” Avis Brown Baker who came to the Republic of Texas as a young girl, and her landing at Old Indianola was the beginning of six decades of pioneer living for her in the very heart of the most historic part of the Lone Star State. Her father was a Methodist minister, and he played an important part in the early religious life of Texas. Thomas Moody Brown was born in Waterville, Maine, in 1802. He married a Miss Emery of the same place, and here on the 10th day of September, 1830, little Avis Emery Brown was born. In 1840 he came to the Republic of Texas, but in 1844 he returned to Indiana to bring out his family. They came by boat, and landed at Indian Point, later called Indianola. So begins the account of this noble Texas pioneer woman.

This is an extensive article describing the emergence of the cattle industry in Texas. When the Civil War ended there were thousands of cattle on the open ranges, and no market for them. But when the railroads penetrated Kansas, a shipping point was established at Abilene, and later other towns, which made it possible for cattle owners in Texas to send their animals to Kansas City, Chicago, and other northern centers, and thus an outlet was provided for the thousands of longhorns that were then of such little value to their owners. From 1865 to 1885 millions of cattle were driven out of Texas to find a ready market in the North. The cattle industry took on new life, and brought great wealth to the Lone Star State. The article goes on to further describe the Winchester Quarantine, which was a method devised to prevent the Panhandle cattle (through which the trail drivers moved their cattle) from contracting the the so-called Texas fever which decimated many herds.

Excellent account of the devastating storm and horrific flood of Galveston, September 8, 1900. There have been heavy blows and there have been times when the waters of the bay and the Gulf met in the Galveston streets, but, this storm is without parallel. This lengthy account begins with a narrative of the event by Mr. Hunter, and then includes the eye-witness account of Mr. John A. Rockfellow, of Arizona, who, with his family, barely missed death in the Galveston tragedy.

The Shortest Oil Boom on Record

Account describing the oil boom of 1919 at the "ghost town" of Leeray (on the Eastland-Stephens county line) -probably the shortest oil boom on record.