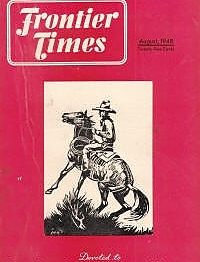 "Two-gun" men, "boot" hills, bank robbers, cattle "rustling" fence wars, reckless cowboys and dead sheepmen — these constitute the magic connotation of the word "frontier." Literature dealing with the times when the fringe of Nordic civilization was edging slowly towards the Pacific, has the rather distinct flavor of "hard" liquor and the pungent odor of burnt gun-powder. Writers have largely confined their commendable efforts to narratives concerning Billy the Kid, Calamity Jane, Buffalo Bill, Sam Bass, the Hole-in-the-Wall gang", Kit Carson and others of similar glamour. The fictionists have hardly touched the possibilities of the ordinary unromantic frontiersman. Of this group, unexploited in literature, the frontier newspaper editor was an individualist of the individualists. Among the pioneers editors of Texas, Edgar Rye stands unique. Here is his story.

Account of doctor F. R. Seyffert of the Cusihuiriachic Mining Company at Cusihuiriachic, Chihuahua, west of Chihuahua City. He was an expert on rattlesnakes of the region and here describes in particular the phenomenon known as “rattlesnake gatherings.”

Account of Col. Manuel Bandera, who was born in Spain in 1798. He was a son of one of the old wealthy and aristocratic families of Spain whose name had figured in the annals of Spanish history for several centuries. The family belonged to the titled nobility of Spain and one of the ancestors of Manuel Bandera is said to have been an officer on one of the ships under Christopher Columbus in his voyage of discovery. About 50 miles to the northwest of the historic old city of San Antonio de Bexar is the town of Bandera, the county seat of the county of that name. The town is on the beautiful mountain stream known as the Medina river, the head of which stream is about 50 miles above the town of Bandera. The location of the town is a beautiful one, environed as it is by low hills that would scarcely be dignified by the name of mountains in any really mountainous country. Around this beautiful location there cluster many stories and tales of wild adventure and romantic episodes. Here is an account of the area and the of the man who fought there.

“Much of Texas history is written in cattlebrands. Branding of cattle began before Texas was a republic, and some of the cattle brands used today were brands originating when Texas was part of Mexico and under Mexican rule. It is estimated that there are at least 20,000 registered cattle brands in Texas.

The purpose of the cattle brand was to enable each cattle owner to so mark his cattle that he could identify and claim them should they go astray, or be stolen. Cattle-thieving made it advisory to select brands that would he hard to alter or "burn out." The practice of burning off one owner's brand, re-placing it with another brand, was a trick often resorted to by cattle thieves or cattle rustlers. Hence it required study to devise a brand not easy to alter or obliterate.

For instance, it is told of John Means, famous rancher of the Davis Mountains, that in selecting his brand he sat down one day by the side of his barn and began making marks in the ground with a stick. One figure he drew was the letter Y, but he decided it would be too easy to alter. About this time, from under the barn, a little pig came out with his curly tail sticking up. Means at once had an idea: he attached a curl to the lower part of the Y and the "pig tailed Y" brand was born. Another rancher...”

Mentions: The Rafter brand. * the "road brand," * the "Running W" or "Laurel Leaf" * The "Running W" brand of Captain Richard King of Kingsville, Texas * a partner, by the name of Kennedy. * The LFD brand (Left-For-Dead) is that of Maj. G. W. Littlefield of Austin, Texas * the Wrenn library of English literature * the Alice Littlefield Girl's Dormitory * SMS is that of S. M. Swenson * the poker hand (four sixes) brand, owned by S. B. Burnett estate of Fort Worth * Col. Ike T. Pryor of San Antonio, Texas * Shanghai Pierce's brand was the Sealions "D". * Colonel A. H. (Shang-hi) Pierce * The famous XIT was the brand of the Capitol Land Syndicate of Channing, Texas * C. C. Slaughter of Dallas * the "Lazy S" brand * The "Goblet" brand was that of John Blocker of Big Wells, Texas * Preston Rose * J. A. is the brand of Charles Goodnight of the Panhandle * John Adair, an Irish cattle trader * 7A was the brand of, the first man to introduce fencing into Texas * MK was the brand of Samuel A. Maverick * Mrs. Ann Martin of Mason county, holds an interesting place among Texas cow-women. Her brand was known as the "Lazy F" * her sons,. Charles L and Max * Half circle 10 was the brand of George W. Saunders of San Antonio * OB brand is that of D. H. Snyder of Georgetown * Mark Withers, of Lockhart, Texas * The brand of W. T. Waggoner, of Fort Worth. Texas, the three reversed D's * "Flying U" was that of S. E McKnight of Sonora. Texas * The "Buckhorn" was the brand of Mrs. Kennedy of Taylor, Texas * The "Boxed Y" was used by Julian M. Bassett of Dryden, Texas * "Crazy Crosses" is owned by Thomas E. Burns of San Antonio. * Quarter circle, muley five, belonged to Ira L. Wheat of Fort Stockton, Texas * The "Hash-Knife" was used by the Stevens Brothers of Seymour, Texas * the "Buzzard W" owned by J. J. Welder of Victoria, Texas * 9H6, was used by Smith Brothers of Uvalde, Texas * E Q was that of Elias Queen, famous all over Texas for his EQ cattle horses * "Queen Hill" in WiIliamson county.

Story of pioneer life of “Uncle” Billie Biggs, born in Tipton County, Tennessee in 1854, but became prominent Uvalde county settler. The account was written when Mr. Biggs was still living at Sabinal, and in his 83rd year. The story was taken in shorthand and written just as Mr. Biggs related it, making more than interesting and useful history of the area.

“In 1858 El Paso was just a small adobe hamlet of about 300 inhabitants, more than three-fourth of whom were Mexicans. Nearly all that portion of the village or "ranch" south of San Antonio and San Francisco streets was then cultivated in vineyards, fruit trees, fields of wheat and corn and gardens, for at that time and for years later there was an abundance of water in the Rio Grande all the year round, and El Paso was checkered with acequis, or irrigation ditches.

At the head of El Paso street, near the little plaza, where the main acequia ran, there were several large ash and cottonwood trees, in the shade of which was a little market where fruit and vegetables, and fowls and mutton, and venison, and other articles were sold. We had no regular meat market. To one of these trees some enterprising citizen had nailed a plank, which for years served as a bulletin board where people were wont to tack signed manuscripts giving their opinions of each other. Here Mrs. GiIlock, who kept the hotel where the Mills building now stands, notified the "Publick" when her boarders refused to pay their bills, and here, in 1859, I saw my brother, Anson Mills, nail the information that three certain citizens were liars, etc., and here, just ten years later, I gave the same information regarding B. F. Williams...”

Of all the brave and courageous men who died in the fierce struggle between Texas and Mexico few were more brave and courageous, and none whose history was more pathetic, than Dr. James Grant, the subject of this story. He had left his native Scotland; invested his fortune in a new and strange country; married a Mexican lady; became a member of the State Congress of Coahuila and Texas, and then...

Account of the massacre of Mrs. Polly Russell and her children which occurred in Wise county in August, 1868 at their home on Martin's Prairie, abort three miles southwest of Chico. This was one of the most atrocious massacres ever committed on the frontier.