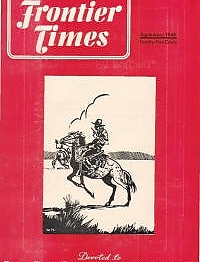 Several camel-laden vessels docked at Galveston during the years between 1856 and 1859. The camels were imported from Africa for use of the U. S. army and after a thorough trial were pronounced adapted to the needs of the army. One of the last cargoes of camels received at Galveston was shipped there, for sale, by an English woman named Watson. The camels were entrusted to Gov. F. R. Lubbock, who has given a very interesting account of the "forty camels and their Arab attendants" in his memoirs.

The camels were carried away from Galveston to the arid sections of Western Texas and New Mexico and there they were given little attention because the war broke out. The U. S. army moved North and the Southern troops had other matters of more importance to handle. Gradually they died out until now there are probably none of the successors of the original bands in existence, though from time to time stories have been told of wild camels seen in the mountains sections of New Mexico. Here is the story

Education facilities were lacking in the early days in Texas. There were very few schools and colleges during the days of the Republic. One of the outstanding, foremost institutions of its day was McKenzie College, established near Clarksville in 1841, by Rev. J. W. P. McKenzie, which carried on for nearly thirty years. Here is the story of that institution.

The Lost Lead Mine

Account of the mysterious mine believed to be along the banks of Sandy Creek in the southern part of Llano county. The information in this article was told to the writer by the late Henry Smith of Llano a few years prior to his death. It was the favorite story of this Llano pioneer, who searched for the many times during his earlier years, and who never abandoned the idea that it would some day be found.

They Still Talk About Creed Taylor

Account of Creed Taylor who left his Ecleto Creek in Wilson county in 1869, and headed west settled in the wild slashes of the James River country in the blue mountains of eastern Kimble county. Here is his story.

Article depicting the process used by the South American Jivaro Indians whereby they shrink the heads of enemies. One of these heads can be found in the Frontier Times Museum in Bandera.

The Groce Family of Texas

This is the story of one of the first Anglo-American families of Texas. Many generations of this pioneer family rest beneath Texas soil. Here is a detailed account of their history and some excellent genealogy.

“The authentic history of the western hemisphere only reaches back between three and four centuries; hence the term "prehistoric," when applied to American antiquities, does not always imply that they correspond in age with the prehistoric remains of the old world, whose history embraces thousands .of years. But writers on American archaeology do not, I believe, designate as prehistoric any memorials that are referable to the existing race of aborigines, but only such as are believed to have be-longed to races that have passed away, and which may be supposed to correspond in antiquity with many of the prehistoric relics of the other hemisphere.

The prehistoric remains of man and his arts found in the tumuli of the Mississippi valley indicate that the country was once inhabited by a more civilized people than the red man; yet the former may have preceded the latter in the occupation of this continent, for the flint arrow-heads found in enumerable localities throughout this state (and indeed through this continent) buried in some instances several feet beneath the surface in alluvium, attest the presence here of the race untold ages before the advent of the "pale-faces." These tiny monuments of the American aborigines are, in fact, more enduring than the pyramids of Egypt, and thousands of years hence they will continue to be turned up by the plow of the farmer, looking al-most as fresh as when they were first wrought from the pebbles in the early ages of human existence.”

The Story Of A Fan

“In Frontier Times Museum in Bandera, Texas, is a beautiful Chinese fan, now more than one hundred years old. This fan is made of rice paper, with sticks of lacquered teakwood. The fan belonged to one of the wives of the Chinese emperor Tao Quang, who reigned from 1820 to 1850, a period of thirty years. The scene on each side of the fan represents the imperial court of Tao Quang, with the faces of the members of the court, each an actual portrait, painted on a tiny bit of ivory and stuck on, while the dress of each figure is appliquéd silk beautifully done. This fan was obtained in Canton during the occupancy of the British of that city in 1841, now 107 years ago. The man who pro-cured this fan was a British soldier by the name of Cyril Burchett, who exchanged a small quantity of opium for it to a member of the imperial household. Later Burchett sold the fan ,to an Englishman who gave it to his sister, and this sister possessed it for fifty-seven years. It is now one of the very interesting items in the museum mentioned above, and is still in a splendid state of preservation — a work of real art.”

Dodge City was not the only town in frontier Kansas known for its wicked character. This account details others that had gained, rightfully, that same reputation.

The Scalping of Wilbarger

Account of tragic event that occurred in the autumn of 1833 when Josiah Wilbarger, a man of plain, practical sense and strong nerve, in company with two other men had gone on an exploring or hunting excursion in the mountains near and above the present city of Austin. After a trip of several days, they encamped for the night, on their homeward march, on a little stream, perhaps Walnut Creek, at the foot of one of the numerous mountain spurs in that vicinity, feeling quite secure, as they had seen no indication of the presence of Indians on their route, but they were doomed to a sad disappointment. Here is that story.

Congress of the Rounders

“The humorous description given below of a Christmas frolic which took place in Austin, is taken from the Daily Bulletin, a paper printed in Austin in 1841, and published and edited by S. Whiting. This paper was printed here during a session of Congress of the republic.”

Jean Lafitte was a native of Bordeaux, France. At an early age he ran away from home and enlisted in a British ship of war. Deserting soon after, he went to South America. About 1806, he fitted out a privateer, in which he coasted in the West Indies seas, and in a fear years by his bold exploits he acquired great wealth, and, by the singular attractiveness he possessed gathered around him a most devoted band of followers. Between the years of 1817 and 1820 Jean Lafitte held sway at Galveston. He built there a town which he called Campeachy. His authority over his subject was supreme, and he lived in almost regal splendor. His establishment was finally broken up by the United States naval force in 1821, and he abandoned Texas. Here is his story.