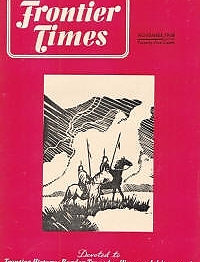 Mr. Taylor offers this excellent sketch of the life of this consummate man of character, courage and nobility.

Leslie Traylor made it his life's hobby to trace out details of the life of Jesse James and of the James Boys. This account offers some of his more notable reflections and observations. If you are researching Jesse James' history, you will need this article.

In 1857 Frederick L. Olmsted, famous architect of New York, made a horseback journey through Texas, and later wrote of certain events that met him in his travels, one of which was the issue of runaway slaves. Here is his story.

Account of the tragic events of Sunday, the 24th day of April, 1870, when Colonel Merriam, of the 24th infantry, United States army, with his family and escort encamped on the North Concho River. Fatigued with their journey, the party were pleasantly resting, when early in the evening Colonel Merriam saw signs of the coming storm. The tent was fastened, and made as secure as possible, and about nine o'clock a hail storm burst upon them accompanied with some rain and a strong wind. The fall of hail was unprecedented, lasting until eleven o'clock, the stones being of the size of hen's eggs, and striking the tent with a noise like that of incessant musketry. The colonel. who was not ignorant of the sudden and extreme over-flows to which the mountain streams of Texas are liable, went out into the darkness as soon as the storm had ceased. to see what effect had been produced on the rivulet. To his amazement he found...