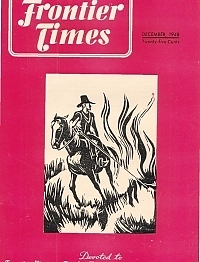 “In 1811 and 1812 Colonel W. D. C. Hall was residing at Nachitoches, and engaged in the study of law under the late distinguished Judge William Murray, who was then a practicing lawyer in the parishes of Nachitoches and Rapides. General Overton was then captain commanding the post of Nacogdoches, and Lieutenant Magee, as first lieutenant of artillery, was sent to aid the civil authorities in arresting a band of robbers who were making their headquarters on the east side of the Sabine. He succeeded in making prisoners of ten or twelve of them, who were sent to the penitentiary, and also twelve or fifteen others, who were sent for trial to Alexandria. He caused some of them to be whipped, to make them tell where the others were, by which he incurred the bitter ill-will of the whole party, and though nearly all of them afterward joined in his expedition for revolutionizing Texas and throwing off the government of Spain, yet they always sought to do him all the injury they could.

About this time Magee had a quarrel with a Frenchman, and a duel with swords was the result; Judge Murray acting as the second for Magee. Magee had his little finger cut off, but, at the same time, he cut the Frenchman down with a heavy blow of his sword.

It was soon after this event that Magee conceived the plan of at-tempting to revolutionize this country...”

The first strand of barbed wire ever strung in Coleman county was run by Clark Mann around a section of land on Jim Ned Creek, which is now a part of the Morris lower ranch. That was in the year 1880, according to the memory of J. C. Jones, who settled there in 1876. The event is detailed in this account.

Was in the Potter Scout

Account is written by a former Texas Ranger. Mr. Kimbell who served under Captain Dan W. Roberts in the 1870's and here gives the following account of the Potter Scout, in which Mr. Kimbell participated.

This article was written by Austin Callan, well known feature writer, and was submitted to Frontier Times by Mrs. W. E. Wood. The R. C. Morgan whose name appears in the article several times is Mrs. Wood's father, Two other men featured in the article, Frank Alexander and John Sinclair are her uncles. Col. J. E. McCord, father of J. P. McCord, is also mentioned. The account describes the desperate conditions that the Rangers suffered in their warfare against Comanches in the winter of 1862.

The Haunted Spring on the Rio Grande

Account details an area thirty miles above Eagle Pass, on the Mexican side of the Rio Grande, where there is a bold spring of water which flows forth from beneath a low ledge of rocks, and the small rivulet formed by this spring flows down a narrow and beautiful valley until its waters are mingled with those of the Bravo del Norte, about half a mile away. People in the region have believed the spring to be haunted due to the tragic murder of two young lovers that occurred there.

The Dancing Man of the Navajoes

Account describes the story of "The Dancing Man" of the Navajoes. Other Indian tribes have been subdued by bloodshed and driven into peaceful pursuits at the point of the bayonet, but the Navajoes, the bravest and most intelligent of the red men, were lured into loyalty by a trick. To this day old remnants of this once-powerful tribe pin their faith to a shabby old scare-crow preserved in a Pueblo mission, under the belief that "The Dancing Man" fore-told through many generations had visited them and stopped bloody conflict. Here is the story.