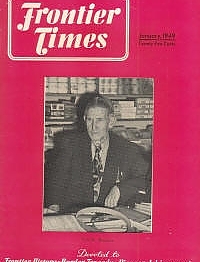 Account of Will D. Boydstun, long-time pioneer dry goods merchant of Baird, TX. Mr. Boydstun arrived in Baird January 19, 1892, and went to work for his brother, B. L. Boydstun, who was in the hardware business, and had arrived in Baird three years before. He worked for his brother for sixteen years, then he opened his own dry goods business in Baird and was engaged in it for forty years.

A Christmas in the Shadow of Death

This sad story was written by an American who was reared in Mexico, and was still living there in 1910, when he sent the manuscript to John Warren Hunter, then living at San Angelo. It was written in Spanish, and Mr. Hunter translated it. Defoe and Mr. Hunter met in Mexico during the Civil War, and kept up a fairly regular correspondence until the latter's death in January, 1915. It is a sad tale of brutality and bloodshed.

Account of the massacre of Mrs. Polly Russell and her children in Wise County in 1868, at their home on Martin's Prairie, about three miles southwest of Chico - one of the most atrocious massacres ever committed on the frontier. Mrs. Polly Russell was a widow with four children. Here is the sad story.

In Texas Down By The Rio Grande

A tense true story of the glorious last stand of Seth Burr, dashing young cowboy who found himself facing death in behalf of his great love.

In Quest of the Black Stallion

Account of a young lieutenant's ambition to capture a beautiful black stallion, and how the Americano was betrayed into the hands of El Mocho, a notorious brigand and robber, and how he finally found his way back to his command through the kindness of an Irish deserter from the American army.

Account of Mrs. Howell Bunton, a bride of three months, who told her husband, "I'm going with you" – that is, on a cattle drive up the old Chisholm trail rather than return to the home in Austin. This story describes the events of that trip.

The author here recalls eyewitness accounts of early bloodshed on the streets of old San Antonio.

The Daring Feat of a Georgia Soldier

This thrilling story of prison life during the Civil War was written in 1910 by Rev. J. N. Hunter, an uncle of the editor of Frontier Times. J. N. Hunter rode with Forest's Cavalry through most of the four years of that great conflict, but was captured, and taken to Camp Douglas, near Chicago, where he remained a prisoner until June, 1865. He was an eye-witness to the flag-pole incident described in this story.

“The five cowhands gazed at the decrepit chuck wagon with a baffled look on their dust-seamed faces. That it should fail them, and this so close to their goal, seemed incredible.

The drive itself had been undertaken on a shoe string by this handful of foolhardy kids. The boss was a youngster of sixteen who, because of his age, had been refused admittance into the Confederate army the previous year, 1865. So he had left Missouri for Texas and there launched himself into the cattle business. Buying a herd of about 500 steers at seventy-five cents a pound, and that on credit, and hiring five cowboys at forty dollars, also on credit, with promises to pay only in the event they made a profit on the cattle, they then headed for Sedalia, Missouri...”