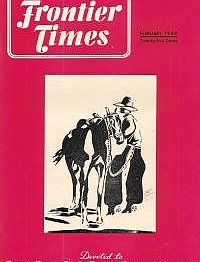 When General Santa Anna, president of Mexico, was captured by the Texas forces after the battle of San Jacinto, in April, 1836, he was released, and returned to Mexico. Before leaving Texas for Washington City on his way to Vera Cruz, he wrote a letter to General Houston (included in this article) wherein he made numerous expressions of gratitude and promises. But Santa Anna, six years later seemed to have forgotten all of his protestations of gratitude and, in 1842, sent an expedition into Texas to "retaliate" and perhaps "reconquer" Texas. This story includes the letter from General Houston to Santa Anna in response.

In The Days of Chills and Fevers

Account describes remedies and medicines used in pioneer days to fight the effects of flu and flu-like symptoms.

Davy Crockett lived up to his motto and died in the belief -- "Be always sure you're right then go ahead." This immortal hero who died a martyr's death at the Alamo, in San Antonio, Texas, March 6, 1836, was born on August 17, 1786, in Rogerville, Hawkins county, Tennessee. Here is Mr. Crimmins life-sketch of the great Texas hero.

The Tampico expedition was an episode in the Texas revolution. Its success would almost certainly have changed the course of the war and, perhaps, averted the declaration of independence, but it has received scant attention from the historians, and its relation to the larger movement has never been shown. Its origin and purpose are the theme of this article.

Crossing The Desert in 1848

The following narrative of a horse-back journey with Kit Carson is related by Col. George Douglas Brewerton, of the U. S. Army, who published his experiences in Harper's New Monthly Magazine in the 1850's. Douglas was a 19-year-old boy, and had gone to California by sailing vessel as a second lieutenant in the Stevenson Regiment of New York Volunteers. He returned overland from Los Angeles to Independence, Missouri, by the Old Span Trail and the Santa Fe Trail, and made the journey as far as Taos, New Mexico, in company with Kit Carson. The expedition left Los Angeles on the 4th of May, 1848, and Brewerton reached Independence some time during the month of August following. Here is that story.

Mentions: The 'Jornada del Muerto' (the journey of death) , the Spanish Trail , "The Pau-Eutaw, or Digger Indians.

“In the November, 1948 issue of Frontier Times, there appeared an account of the drowning of the wife of Colonel Merriam and five other members of his party in the North Concho river, April 24, 1870. Old timers of West Texas re-call several drownings which have occurred , during flash floods in that stream during the early days. The following letter from E. W. Walker, 120 West Wood Street, San Marcos, Texas, recalls one of those terrible tragedies, which occurred in 1900.”