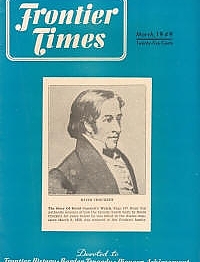 The Chihuahua Trail, as it became known, was begun in 1848 by a small group of pioneers, including John W. Spencer, John B. Davis, Ed Frobboese, August Santleben, John Holly, Sha Hogan, John Burgess, Brooks, Calderon, Richard Daly, William Russell and others. These were the first set of adventurers, who later became known as the trail drivers, to complete successful journeys; although the Connelly expedition, from Chihuahua City, across Texas, into Arkansas, and return, was made in 1839. Here is the story.

Among the many bloody deeds that occurred on the old overland stage line none was more tragic perhaps than the death of James Giddings, a brother of Colonel George H. Giddings, which occurred some time in April, 1863. The guard to the overland stage that made the discovery of the massacre of Giddings and the men at the station were under that veteran old frontiersman, Captain Skillman, whose tragic death afterwards will be remembered by old citizens of West Texas. The party consisted of the following men, some of whom not long afterwards met with a tragic death near Cook's Springs: Bob Swope, Bob Avaline, William Wright, Freeman Thomas, John Wilson, Mat. Champion, Charley Lowry and William Ramsey. This is the story.

Colonel Ike T. Pryor, who died in San Antonio in 1937, was one of the outstanding cattlemen and trail drivers of Texas in the 1870s and 1880s. His life story reads like a romance, for it was made up of thrills and pathos, struggles and hardships, failures and triumphs that befell but few men who successfully overcame such obstacles that he met and conquered. A pioneer of the days of the unfenced range, he became one of the most widely known cattlemen of America, and if his reminiscences had ever been written they would afford a complete panorama of the cattle industry of the United States. From the early days of the grass trails, when the great herds of Texas longhorns were driven thousands of miles to market, down to the time when bred cattle, modern marketing systems and rail transportation, he had been an active participant. This is his story.

Between Crystal City and Carrizo Springs, on the border of Dimmit and Zavala counties, lies Lake Espantosa, noted in frontier history, Mexican legendary tales and folklore, as a place of dreadful happenings, hence the name, which means frightful or ghostly, which its natural setting conveys, as well as the tales told about its ghosts.

The Nueces river probably flowed through it at one time, but it now receives its waters from a number of small creeks that drain a large scope of country composed of hills covered with thorn bush. Here is the story.

The Fall Of The Alamo

“The fall of the Alamo, the tragic results of which are so well known, so far as the final assault is concerned, have not been fully or correctly given in any of the current histories of Texas. The reason is obvious when it is remembered that not a single combatant from within survived to tell the tale, while the official reports of the enemy were neither circumstantial nor reliable. A trustworthy account of the assault could only be compiled by comparing the verbal accounts of such of the assailants as could be relied on for veracity, and adding to this, such light on the matter as may be gathered from the mil4tary documents of the day. As I was a resident of Matamoras when the event happened, and for several months after the invading army returned thither, I had opportunities for obtaining the kind of information referred to which few persons if any, still living in Texas, have possessed; and I have been urged to publish what I have gathered on the subject that an interesting fragment of history may be saved. Among the facts which have been perverted is...”

Account of Charlie Scheurich, Jr. who owned a general merchandise store in the little mining town, and his father spent much of his time there assisting in the store, although his home was at Taos, where his wife and one or two daughters lived. The elder Scheurich was then about 75 years old, and very active. He spoke English, Spanish, German, and several Indian dialects. He came to New Mexico in 1854, as a teamster with a wagon train hauling goods from Independence, Missouri, to Santa Fe. He liked the Territory so well that he decided to remain and "grow up with the country." He was intimately acquainted with Kit Carson, who took quite an interest in "the young man from the States," and it was in Carson's home at Taos that he first met the beautiful Teresina Bent, Carson's niece, and married her a year or two later. This is his story.

Remarkable Incidents of the Buffalo Range

John R. Cook was one of the famous buffalo hunters on the Plains of Texas in the 1870s, and in 1907 he wrote and published a book, "The Border and the Buffalo," which is now classed as a collector's rare item. From this book comes this story.

A Cowboy In Texas History

“The history of Texas is one of the most colorful and kaleidoscopic in the annals of any state or nation, especially so during its colonization and revolt from Mexico. The men who had migrated to Texas regardless of their purposes collectively and individually made Texas history. To a man they stood for Texas; as one of them expressed it at a gala reception in Brazoria, Texas given by Judge Cummins to celebrate the capture of Velasco in 1832:

"Long corns and short shoes to the insidious enemies of Texas -- whether from Amsterdam, Rotterdam, or any other dam place -- dam them all in a heap."

The Story of David Crockett's Watch

“We do not know just where Davy Crockett's famous watch is today, but presume that it is in possession of some of his descendants here in Texas. In 1856 the State of Texas granted to Crockett's widow a headright of land in Hood county, on the Brazos river. Mrs. Crockett moved her family to Texas, and died near Granbury in the 1860's. Her re-mains rest in the little cemetery at Old Acton, and there is a beautiful monument at her grave.

Many version have been given of how the historic watch worn by David Crockett for years before he was killed in the Alamo massacre March 6, 1836, was restored to the Crockett family, but this seems to be the really authentic account.”