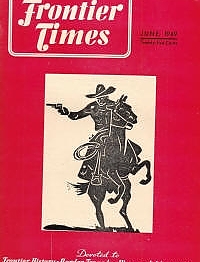 Account of ranches, cattlemen and cowboys along the Canadian river in early 1880's, and particularly a family which consisted of husband, wife and several children. The father's name Lackey—Captain Lacky— once a soldier in the United States army. Settlement was made at Red River Springs, downstream 40 miles from Ft. Bascom. Of particular interest is an incident involving 17-year-old Roy Lackey.

The Tale of The Reata

This article has to do with the establishment of the first mail service inaugurated in 1857 between San Antonio and San Diego.

From The Texas Siftings

“The coyote is about two-thirds the size of a yellow dog and looks like a second-hand wolf in straightened circumstances. He bears about the same relation to the genuine wolf that the buzzard does to the eagle, or that a chicken thief does to a modern bank cashier. He has a perpetual air of being ashamed of himself, or of something he has done. As you catch a glimpse of him, trotting away from one mott of timber to another, looking back over his ears, and with his tail furled around his left leg, he looks as if he were aware that the police had a clue to his whereabouts, and were working up his case. No one ever saw a fat coyote. You may catch a young one, civilize him as much as you can...”

“I shall write of cowboys as I found them in the spring of 1902, when I came to the S.M.S. Ranch in Texas. There were whole outfits of trained, seasoned men, almost born in the saddle...” Mentions: * Estelline * Tongue River Ranch * Curlew * Aspermont

“Born in the historic old town of Leavenworth, Kansas, in 1860, I have vague memories of what I now know as the Civil War, which, to a child's mind, meant only hanging over the gate to watch soldiers march by or fill canteens at our well, to hear the bugle call, or the hushed voice of my mother and her friends as they speculated on the fortunes of war and the threatened "Price's raid."...

“In the spring of 1878 there was an outfit, I've forgotten the name, camped in this section that had a negro cook. One morning the cook killed one of the trail drivers with a chopping axe while he was eating breakfast. A Mexican horse wrangler with the outfit roped the cook with his rawhide lariat and took him for a slide as fast as his pony could drag him. He went into some rocky ground not too far from camp and after the negro wore down so thin the loop would not hold him, the other hands gathered up the re-mains and threw them in a gully and covered them with rocks.

They buried the white man at the camp ground on the "lone prairie" and went on north with the herd to Kansas.

A few years later some people came into the country looking, they said, for old Major Nolan's lost silver and gold bars, reported lost by old timers of that day and time somewhere about the mouth of the Nolan river...”

Who Knows of This Incident?

"In the February issue of Frontier Times, pp 114, I see an article regarding people who have been drowned in the Concho River.

"I am trying to get some information regarding a family by the name of Merrill, reportedly drowned in a flood of the North Concho, probably in the '80's. According to saga, this man Mort Merrill, had settled near Sherwood in Irion County, establishing a ranch on a branch of the Concho. He reportedly returned to his ranch one night to find waters flowing where the ranch had stood. He turned his horse loose and spent the night swimming around searching for his family. He found one boy who he saved. He is now Sam Merrill, an attorney in East Texas.

Capture And Death Of Alvin And Will Odle

Account of the betrayal, capture and death of Hill country outlaws Alvin And Will Odle in 1889.

Although the most populous and important town in the province and the Republic of Texas, San Antonio, being the extreme, and isolated, outpost of civilization in that direction, was, from early times, greatly exposed to Indian forays. This story gives the details.