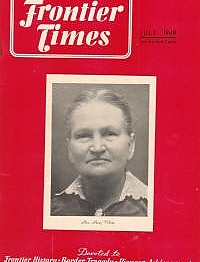 An Octogenarian Writes A Book

“The father of Frank S. Gray moved to San Saba county in 1860, and settled on Cherokee creek. There in 1861 Frank S. Gray and his twin brother, John, were born. The family was for many years one of the most prominent in that section. In 1880 Frank S. Gray and his brothers, John, Buck, and Rube, moved their cattle to Edwards county and ranged them there, Edwards county was unorganized at that time and there was plenty of open range. It is of the conditions he found there that Mr. Gray writes, and tells of the thrilling experiences he had while a resident of that county.”

Another Story About Buried Treasure

This account of buried treasure in Texas was written by E. O. McNew. It concerns the possibility and plausibility of a cargo of money that came into Texas from south of the Rio Grande, during the Mexican Revolution of 1811. An expedition set out from Coahuila to San Antonio, seeking escape to the United States. They were caught in Texas and hanged, and nobody knows what became of their wealth.

With all the thrilling situations featured in a modern melodrama enacted by the movie actors, the looting of the State Treasury is probably one of the most venturesome feats ever pulled off by the bands of outlaws and other reckless characters who infested Texas in the early 1860's. This account describes the attempt to rob the Treasury Building on the night of June 11, 1865.

The Oldest House in Texas

Account of St. Denis, founder of the town of Nacogdoches, who was one of the earliest explorers of the wild region between the Rio Grande and Red rivers. Before settling at Nacogdoches he built a strong house of great cedar logs and rough stone in the Guadalupe mountains, some eighty miles west of the locality afterwards selected for the Alamo mission. He frequently visited this place, ostensibly to trade with the Comanches, and here in these wild, rugged mountains, in a lonely old house that is still standing, he was finally murdered by a roving band of Natchez Indians whom he mistook for Comanches. This famous old house in some way played an important part in both the good and bad fortunes of this remarkable young man. Here is that story.

Major W. M. Walton, or "Buck" Walton as he was more generally known, was one of the leading lawyers, not only of Texas, but of the South. He was a resident of Austin for nearly 70 years and was foremost in prosecution or defense of cases that won prominence in the courts of this State, and was the author of the book, "The Life of Ben Thompson," one of the noted gunmen of the 1870's. The article which follows was written by Major Walton.

The Dugans Were Intrepid Pioneers

In the early part of 1835, just a year before Houston's army won Texas's independence at San Jacinto, Daniel Dugan came to Texas with his family and settled on Choctaw creek, eighteen miles west of where Bonham now stands. The family at that time consisted of father, mother, five sons and four daughters. They saw that nature had furnished them a goodly country to subdue and make fruitful, and they set about the subduing with diligence. Here is their story.

This account is from notes taken during conversations with Mr. Noah Armstrong and Mr. J. M. Elkins, and reflects the life of Coleman and the immediate surrounding vicinity in its pioneer days.