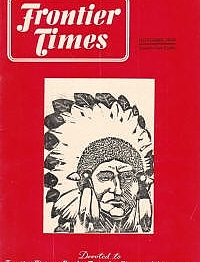 The Great Storm at Ogallala in 1882

Account describes a tremendous, sudden storm and the subsequent flood that occurred at Ogallala, July 2, 1882.

From Puget Sound to Silver City In 1873

Account is excerpts from letters written by C. P. Crawford, who settled in Silver City, New Mexico, three years after that mining town was established. The letters describe somewhat the pioneer conditions existing in the great Southwest and particularly Silver City during the early days of settlement.

Geronimo, the wily old Apache chief, who with his band for years terrorized the settlers in Arizona, New Mexico and Western Texas, and was finally captured by General Miles, was a cautious, crafty old Indian, and took no chances whatever. This account is a tale that was told around a campfire many years ago by Jack Kyle, a Texas cowboy, who was employed as a line rider in New Mexico for the United States Government. Mentions: Cloverdale * Animas Mountains * Animas Valley * Jack Kyle *

The author was a resident of Erath county, TX having settled there in 1872, and describes 70 years of changes in that area.

Comments on Texas by a Georgia Editor

"Gone to Texas," was frequently heard when court convened in Greene, and other counties in Georgia, as well as in other states, a few generations back. Back in her early days, Texas was a refuge for law violaters, and had it not been for her refugees, she might never have gained her independence from Mexico.

This does not mean that ALL of the early settlers of that wonderful state were fugitives from justice. In fact, only a small per cent of her pioneers were of that class. But on account of the vastness of her territory, and the spirit of ad-venture that gripped the lives of the young men a hundred years ago the slightest excuse would cause them to turn their faces to the west.

Greene County furnished her quota of young men to help free that vast empire from tyrannical misrule, and many of her sons lie buried in unmarked graves along the Brazos, Colorado, Trinity and other rivers along which were fought the battles that won fame tor Houston, Austin Jack, Archer, Fannin, Williamson and hundreds of others, whose fame will last as long as the state of Texas will last.

The Alamo and San Jacinto, are holy shrines to every Texan, and Greene County blood flowed freely at both of these. Therefore...” Mentions: Judge George Clark, of Waco * Milledgeville *

Account concerns Tom Sullivan, an old negro who was known to early settlers of Medina and Frio counties. The article was written by Oran Warder Nolen. At the time Tom Sullivan was living at Pearsall, and was 105 years old. He died two or three years later, but up to the day of his death he was active physically, with none of the handicaps and infirmities that seem to be the usual inheritance of advanced age.

When Annie Oakley “Shot the Papers”

A half century ago Annie Oakley was rated as the greatest rifle shot in the world. She traveled for years with Buffalo Bill's Wild West Show, breaking glass balls in the air, knocking the spots off playing cards and often flicking ashes from cigars. This account describes the libel suits she filed and won against several leading newspapers of the country.

The war between the States drew most of the man-power out of Southwest Texas and, as a consequence, Indian depredations, which had been irregular previously to that time, became more frequent and more aggravated. Many of the pioneers were caught off guard and murdered by savages.

The country bordering Nueces river, toward the head draws, though thinly settled was a splendid range with an abundant water supply that made it a sort of paradise for stock raisers. Because of this the more daring ranchmen braved the dangers lurking from savage foe in the fertile hills and valleys of the Nueces. Homes were constantly menaced by Indian attack. When a settler would go to the nearest trading point for supplies, he hardly knew whether he would find his unprotected family alive upon returning home or not. Albert Schwandner of Kinney county was a six-year-old boy living near Camp Wood in those perilous days. He could not erase from his mind the awful tragedy that bereft him of his mother. Here is that story.

Belle Starr, "Queen of the Outlaws"

Account of the dashing Belle Starr who galloped over the plains of Texas and Oklahoma as picturesque and fearless a figure as any bold bad man of her day and time. She was called the "Queen of Outlaws."

This unusual woman, whose escapades as an outlaw and keeper of a mountain rendezvous for bandit gangs in Oklahoma, had brought her into public notice either to be censored or admired for her bravery and banditry. Here is her story.

Train Robbery Near Brownsville In 1891

In January, 1891, the Rio Grande Railroad train left Brownsville as usual about 9 o'clock. It was a beautiful, sunishiny day, but a slight wind was blowing from the east. All went well until the Green Bug reached Loma Trosada, a point about twelve miles from Paint Isabel. Here by the carefully laid plan of a famous bandit gang the rails had been loosened and then carefully laid back in place. Wires were attached to the rails so that, at a given signal, these might be drawn apart. The engineer saw all this too late to stop the train and the engine ran off the track, catching fire as it fell. This was the prelude to the great robbery that followed.