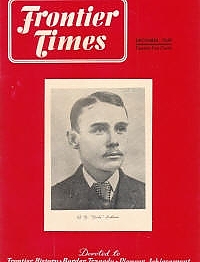 Joseph Young Latham, (familiarly known as Dode Latham), was born in Blanco county, Texas, February 22, 1865, on Spring Creek, near the junction of Spring Creek and White Oak Creek. His parents were Mr. and Mrs. G. W. A. Latham, who for many years lived in Blanco and Llano counties during the strenuous days for the pioneers. On December 11, 1891, he was married to Miss Annie Shults of Waters Creek, Llano county. He taught school around through the country until he came to New Mexico in 1897. He made Carlsbad his home and taught school there until he went into the goat business. He went to Oklahoma twice, and each time cyclones wiped him out. Then he tried his luck in South Dakota, but returned to the Sacramento Mountains in New Mexico, and was chief of police in Alamogordo for twelve years. Then he engaged in the mercantile business for a few years, and settled in Alamogordo, where he lived until he died August 8, 1948, at the age of 83 years. Here is his story. Contains old photos of: Silas F. Latham; Tommy Shelley, Miss Sarah Jane Shelley, Silas Gibson, Samuel Gibson, Ben M. Gibson.

When The Coyote Spoke

“When J. Frank Dobie visited me in Bandera a couple of years ago, he asked if I could give him a coyote yarn to use in a book he was then writing. I did not have a coyote yarn in stock, but told him I could tell him a good one on the lobo. He said he was not interested in the lobo, for his book would be wholly devoted to the coyote. A few months ago Mr. Dobie's latest book, "The Voice of the Coyote," came from the press, and is most interesting. As I read through it, I recalled that I really did have a good coyote yarn, and I am sorry that I did not pass it on to Mr. Dobie at the time...” Mentions:* Sonora * Devil's River News * Mike and Steve Murphy * Del Rio * Uncle Billy Franklin.

Treed On A Rock By A Band Of Yelling Indians

About the close of the Civil War, a number of families located on Hickory Creek, at the western base of House Mountain in Llano county. The heads of these families were frontier stockmen, and for mutual protection had erected their cabins and established their domiciles in close proximity one to another. Among these families were Rev. R. G. Stone, a Baptist minister, his two sons, William Kidd, and others. Indian raids and depredations were numerous during those early days, and House Mountain, being one of the most noted landmarks in all that section of country, the settlers often found themselves in the path of the Red man. This account describes the ordeal of Mr. William Kidd and Harve Putman when assaulted by Indians.

General William Tecumseh Sherman was not held in very high esteem by the average Southerner at the close of the war between the States, which raged in all its fury from 1861 to 1865. Feeling toward General Sherman akin to hatred, at the close of the war, rankled in the minds of the Texans; not that the Texans' homes had been razed by the torch of war; but because of a sympathy for those who suffered and paid the penalty for rebelling against what they regarded as a violation of vested rights. But events which are here related softened the bitter animosities engendered during the war. They occurred before the red hot Texan temper had time to cool.

The Latin Settlement at Sisterdale

Account detailing some of the early day tragedies of Montague county, including the Sad Fate of Daniel Wainscot and Jack Kilgore: The Killing of Little Henry Davis; Death of Spence Moore and His Son, Ira; Attack on Jim Box Family, etc.

This story was taken from the book, "Adventures with Indians and Wild Game," by Dr. William A. Allen. It is the story of a bald eagle and a rattlesnake in a death battle, in Wyoming. Mentions:* the Yellowstone Valley * the Crow tribe * the mouth of Stillwater * H. Countryman * son of Birdshirt.

Account of the life of R. J. Cooke of Ozona. He was born in either 1875 or 1877, his father, W. G. Cooke, was a farmer in Somervell county, but in 1881 he moved his family to Bandera county and started ranching. In 1894 he went to Rocksprings and became a ranch hand for T. W. Patrick. Patrick sent him first to Crockett county with a herd of cattle. Mr. Cooke intended to return to Rocksprings the next day, but he liked the infant town of Ozona and decided to stay on. Here is his story.