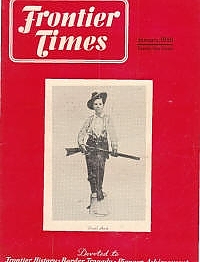 Account of Pearl Hart, a good girl turned bad, who was born Pearl Taylor in the little town of Lindsay, Ontario, Canada, in the year 1871. Here is her story.

Account of some brutal Indian raids that occurred in Montague County, TX during the latter part of 1867 and 1868.

William P. Longley was born on Mill Creek, in Austin county, Texas, October 6, 1851. He was the son of Campbell Longley, a good and upright citizen. In 1853, when Bill Longley was two years old, his father bought a farm one mile west of Evergreen, in Lee county. The Longley home was situated near the main highway as you journey from Nacogdoches to Bastrop. Here is his tragic story.

When Sam Houston Stopped A War

Account of the dramatic effects of the war between the two rival factions in Eastern Texas known as the Regulators and Moderators, and the involvement of President Houston and the remarkable address he gave.

The Last Fight In Texas Between Apaches and Rangers

This account is written by ex-Major George W. Baylor, commanding Frontier Battalion at Guadalajara, Mexico in 1906.

Massacre and Capture of the Babb Family

The murder and capture of the members of the Babb family was an event of the greatest and most sensational proportions of the period of Indian attack, and had gained historical prominence in all the books which treat of the phase of Texas history of which this occurrence is a part. The details surrounding the massacre and capture are offered in this account.

When Pigs Kept Texas From Being A Vassal of France

Account of a notorious pig who by simply rooting around, quite in the manner of pigs, upset the well laid plans of mice and men—that is to say, republics. If it hadn't been for the interference of the pig Texas might today be a French colony, or perhaps have been the cause of a great national war between the United States and the Third Napoleon. Here is the story. Mentions:, M. de Saligny, the French charge d'affaires , Mr. Bullock , Hon. George Flood , Smithville , John W. Hill at Hill's Prairie.