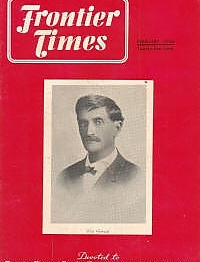 Much has been written about Billy the Kid, famous New Mexico desperado, but no story can be related of him without bringing in the name of his slayer, Pat Garrett, sheriff of Lincoln county, New Mexico, who wrote "finis" to Billy the Kid's bloody career. Here is the story of Patrick F. Garrett.

Once the biggest Government in Western Texas, the swiftest, most lawless and extensively known town in the State, today a collection of dilapidated huts and dirt-covered, grass-grown, brush-hidden foundations, most of the houses fallen down where years ago stood big stores, stables, hotels, notorious saloons, dance halls and varieties. Such is the condensed story of Fort Griffin.

Following The Sun in the Fifties

This interesting eye-witness sketch, written by Mrs. Rachel Eads in 1913, tells of an overland trip from Denton county, Texas, to California, in 1857.

Many incidents in Texas history illustrate the verity of the saying that, "Truth is stranger than fiction," but none perhaps, so forcibly as the circumstances of the scalping of Josiah Wilbarger—since their dramatic interest includes an occurrence as remarkable, if indeed not as mysterious, as any to be found within the range of spiritualistic and psychological literature. Here is the story.

In 1811 and 1812 Colonel W. D. C. Hall was residing at Nachitoches, and engaged in the study of law under the distinguished Judge William Murray, who was then a practicing lawyer in the parishes of Nachitoches and Rapides. General Overton was then captain commanding the post at Nacogdoches and Lieutenant Magee, as first lieutenant of artillery, was sent to aid the civil authorities in arresting a band of robbers who were making their headquarters on the east side of the Sabine. He succeeded in making prisoners of ten or twelve of them, who were sent to the penitentiary, and also twelve or fifteen others, who were sent for trial to Alexandria. He caused some of them to be whipped, to make them tell where the others were, by which he incurred the bitter ill-will of the whole party, and though nearly all of them afterward joined his expedition for revolutionizing Texas and throwing off the government of Spain. Here is the story.

More About The Camel Experiment

This account was taken from the History of Arizona, Volume 1, published in 1915, and tells of the use of camels across the deserts of Arizona.

The Killing of the Counterfeiters

Captain Jason W. James, for many years a resident of Texas and New Mexico, served through the Civil War, and in 1884 joined the Texas Rangers, Company F, Frontier Battalion, at Murphyville, now Alpine, and rendered splendid service to his State. He afterwards moved to New Mexico, where he resided until his death in 1934, at the age of 81. In 1911 he wrote an account of the killing of four counterfeiters by a lone deputy United States marshal. Here is that story. Mentions:, Captain Jason W. James , Paris, Texas.

The little town of Jacksboro, the county seat of Jack county, Texas, was in a fever of excitement of the capture of Satanta, the war chief of the Kiowas. At the period of which I write (1871) he was the scourge of the Western Texas border.

Not contented with having committed the bloody massacre at Salt Creek Prairie, he had, after scalping and mutilating his victims, and filling their bodies with arrows, lashed one poor teamster to a wagon-wheel and burned him while yet alive. A few days later he rode into Fort Sill at the head of his war party and loudly boasted of his atrocious deed. He was arrested by order of General Sherman, then at the post, double-ironed, and turned over as a prisoner to General Mackenzie for trial in Texas for murder. Here is the account of that trial. Mentions:, the Fort Sill reservation , the Wichita swamps , Jacksboro , Salt Creek prairie...

Trickham was a trading-post, and a lively and boisterous community of the cross-roads of the western cattle trails during the 1870's and 1880's. Passing of the thundering herds, thousands and thousands of Texas longhorns moving to Northern markets and to Fort Sumner, New Mexico, by way of the John Chisum trail; the cow-outfits stopping for provisions and the cowboys lingering for refreshments and relaxation. Here is the story.