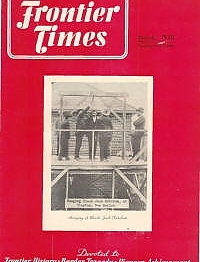 Tom Ketchum, alias "Black Jack," was a notorious outlaw in the 1890's, and was known to many of the citizens of Western Texas, particularly in the San Angelo and Pecos river regions. He and his brother, Sam Ketchum, followed the outlaw trail for several years, robbing trains and places of business in New Mexico, Colorado, and Arizona, until retribution finally overtook them. Here is his story.

For fifteen years after annexation Texas remained under the Stars and Stripes of the United States of America, and these were years of plenty, progress, and broad increase for the commonwealth. Texas gained much by surrendering her sovereignty, for henceforth vexatious foreign affairs form not part of her history.

The population of Texas at the time of incorporation into the Union was about one hundred thousand Americans, with a comparatively small number of Mexicans, besides the Indian tribes. The production of cotton, corn and sugar cane and raising of cattle and horses and hogs were the principle industries, and, notwithstanding that the inhabitants were, during the first few years, mainly engaged in providing for their immediate necessities, by the time Texas became a state the exports almost equaled in value the imports, and the country had already assumed importance in the markets of the world. Here is the story.

In 1880 the old timers who lived in El Paso found themselves confronted by a situation which rendered either the education or the importation of a new kind of gunman an imperative necessity. Marshall Stoudenmire seemed the answer. Here is the story.

Texas During The Civil War

In 1860, by the disruption of the Democratic party, Abraham Lincoln was elected president, and politically the North became dominant in the nation. The secession tide running so strong in the South, now reached its flood. Within two months after the national election all the Southern States east of Texas had seceded, South Carolina leading the way. It was Governor Sam Houston's opposition that delayed the secession movement in Texas. The legislature was not in session, and the Governor persistently refused to call it together. In the absence of the legislature the chief executive was practically the entire state government, and he used his position to combat the approaching crisis as long as he could. Finally in December, by extra-legal means, the people were asked to elect delegates to a state convention to meet in Austin January 28, 1861. Though the convention was constituted in an informal manner, it was clearly a popular measure. Under these circumstances Governor Houston yielded to the importunities of the political leaders and called a session of the legislature to meet one week before the convention assembled. The legislature when it met disregarded Houston's counsel for moderation, and sanctioned the calling of the convention, declaring it to be empowered to act for the people.

So was triggered, the events which shaped Texas during the war of Northern aggression. Here is the story of that dreadful period.

Driving Cattle Up The Trail To Kansas

When the Civil War ended in 1865, the Texas ranges were covered with cattle by the thousands, for which there was no market. Up to and during the war New Orleans had been the principal market for Texas cattle, but during four years of internecine strife, cattle on the open ranges had increased tremendously and in a wild state. The owners, returning from war, found themselves to be "cattle poor;" many of the soldiers coming home from war were without employment of any kind. Conditions were bad. With more than 6,000,000 cattle feeding the broad acres of Texas, and beef commanding high prices in the North and East, wise cowmen began to make plans to drive their cattle to northern markets. How they managed that task is the theme of this article.

In 1850 there was not a mile of railroad track in Texas. Fourteen years before, December 16, 1836, the first railroad charter had been granted in the Republic, but this, with many others, had been forfeited. The first Texas railroad originated at Harrisburg, and was the Buffalo Bayou, Brazos & Colorado Railway, which was incorporated by the act of February 11, 1850. Harrisburg was the center of railroad enterprise for many years. In 1840 some citizens undertook the construction of what was known as the Harrisburg & Brazos Railroad, and an item in the Houston Star, May 16, 1840, says: "Laborers are said to be grading and preparing for laying of rails." This road was chartered January 9, 1841, as the Harrisburg Railroad & Trading Company. Some grading was actually done, but as the work depended on local capital, it being impossible to secure outside capital as long as the existence of the Republic was threatened, the undertaking failed. The account of these first railroads is the subject of this article.

Hanged, Shot and Left for Dead

Many years ago Matagordo county was the scene of a harrowing incident in which a man who was hanged with two companions and left for dead managed to escape, and was ever afterward haunted by the memory of his terrible experience. Here is the story.