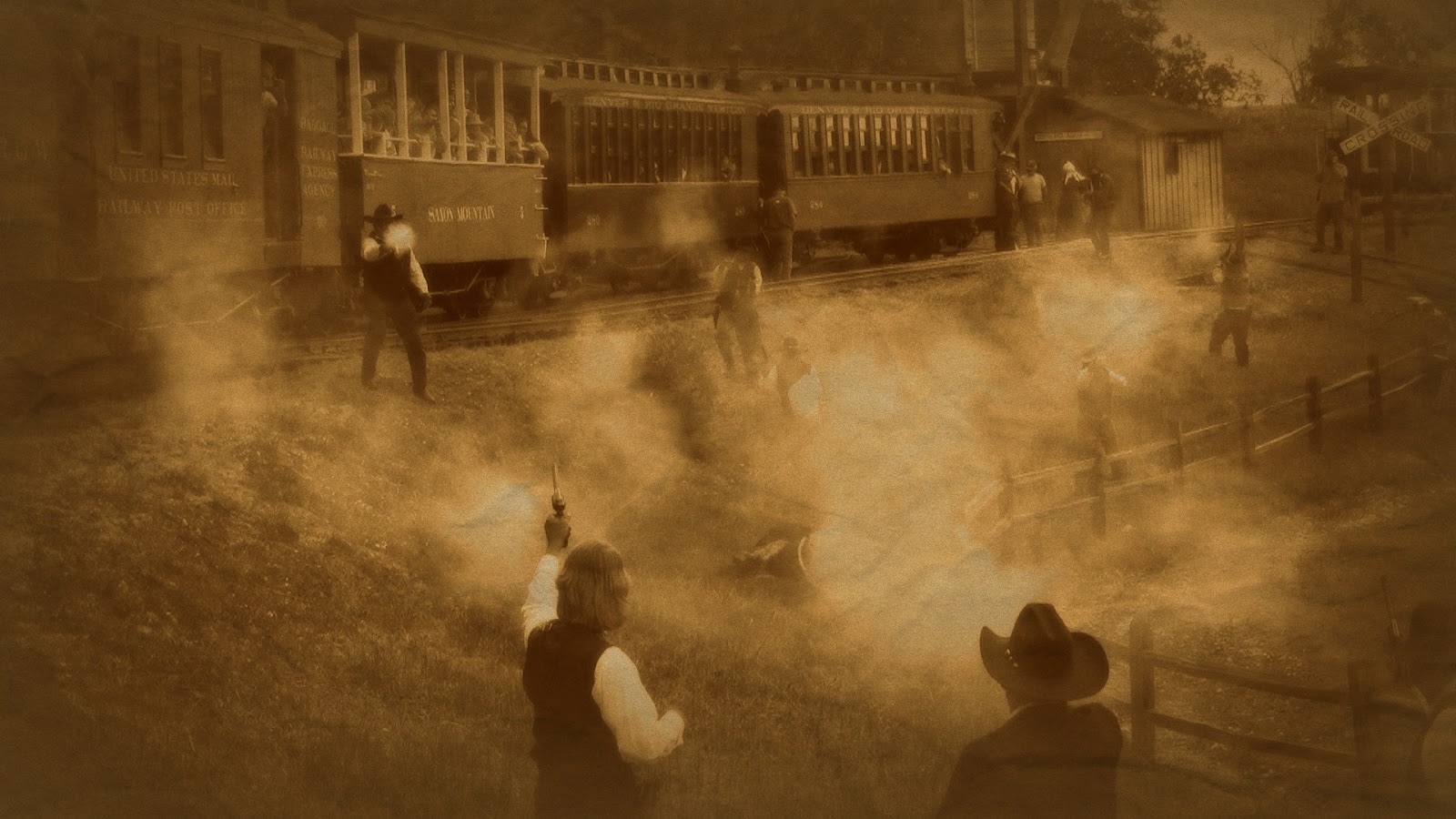 It was in June, 1898, that an attempt was made by four bandits to rob the express car on the Santa Fe railroad, running from Brownwood to San Angelo. I was living in Sonora at that time, and remember the occurrence quite well, because the robbers were captured not far from Sonora, and proved to be well known men of that section.

At Coleman Junction on the night of June 9th, 1898, the train was held up by four men, Pierce Keaton, Bill Taylor, Jeff Taylor and Bud Newman, the Taylor boys being brothers, and Newman was the leader of the band. They covered the engineer, James Stanton, and Fireman Johnson, and marched Johnson back to the express car and told him to ask the express messenger, L. L. White, to open the door. Fireman Johnson did as he was commanded, under penalty of death at the hands of the bandits, but before Messenger White responded several shots were fired by W. F. Buchanan, the traveling livestock agent of the Santa Fe, who had discovered the train was being held up. The fire was returned by the bandits, and in the fusilade Fireman Johnson was mortally wounded, Newman was shot through the left arm, and Keaton was shot through the right leg.

The bandits then hurried to their horses and made their way to the ranch of the Taylor brothers in Sutton county, a distance of 125 miles, going all of the way without stopping to get surgical attention for the wounded men.

The unconscious form of Johnson was placed on the train and backed into Santa Anna, where he died. Sheriff Rome Shield of Tom Green county, was notified to be on the lookout for the bandits, as they had in their haste, left several sticks of dynamite in paper bearing the advertisement of a Sonora merchant, and this was the clue that led to their apprehension by a posse headed by Sheriff Shield, and composed of Deputy United States Marshal Hodges, and the sheriff of Sutton county and several deputies.

Upon their arrival in Sonora the posse went direct to the Taylor brothers' ranch and arrested all of the men without killing or wounding any of them, only one shot being fired, it being fired by Sheriff Shield from a rifle he had borrowed. Rome Shield was a crack shot in those days, and it developed after the men had been taken into custody that he missed his human target only because the front sight on the borrowed rifle had been shifted to one side.However, after the one shot the bandits came out and surrendered with uplifted hands.

In the trial that followed, Newman turned state's evidence and gained immunity for himself, but the others were Convicted, Keaton and Jeff Taylor receiving a term of 99 years each in the penitentiary for the killing of Fireman Johnson, and each got eight years for attempting to rob the express car.

Bill Taylor escaped from the Brown county jail,but was captured before he got very far away. He escaped the second time, but was captured by Newman,who inveigled him into the hands of the authorities at Comstock under the pretext of making an attempt to hold up a westbound Southern Pacific train.

Bill Taylor managed to escape a third time, and went to Edwards county where he found Newman and in a gunfight Bill Taylor killed Newman. Taylor then vanished, and has never been in custody since. As a result of killing Newman he is still wanted in Edwards county for murder.

W. F. Buchanan, who opened fire on the robbers at Coleman Junction, was residing in Fort Worth a few years ago, being connected with the live stock department of the Santa Fe railroad. Pierce Keaton and Jeff Taylor, are probably still in the penitentiary, unless pardoned during recent years. At the time of the affair Keaton had a great many sympathizing friends at Sonora. He was a young man of quiet, gentlemanly bearing, and many were of the opinion that he was led into the crime by his companions.

The arrest of this quartet was a quick piece of work on the part of Rome Shield and his posse. As nearly as I can recall the men were arrested on Thursday, June 11, following their attempt to rob the express car on the night of June 9.