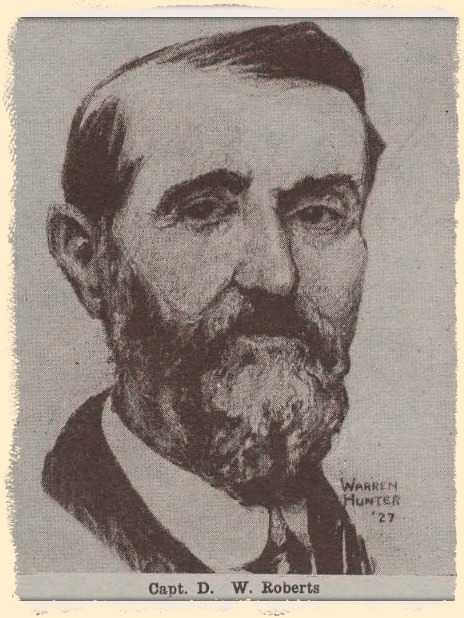 [This brief sketch is one of numerous articles on Capt. Roberts - see for example]

Prominent among the Ranger captains of frontier days and who are still in the land of the living is Captain Dan W. Roberts, of Austin. We are using Captain Robert's' portrait in the most prominent place we can find in this magazine, on the front cover of this number. A few months ago the editor of. Frontier Times visited him in his home at Austin, and found him looking forward eagerly to the reunion of his comrades of other days at Menard in July. He carries the weight of years lightly—he is now 86—but since we visited him he has been forced to undergo a surgical operation, which has greatly weakened him. His good wife, who, by the way, shared many of the privations and dangers of Ranger life by going from place to place on the frontier with him and living in camp, was also looking forward to the reunion of the Old Guard at Menard, and showed us quite a collection of photographs and souvenirs she had gathered during those strenuous days.

Captain Dan W. Roberts was born in Winston county, Mississippi, October 10, 1841, and came to Texas with his parents in 1843. His life from childhood was spent on the frontier, and to him, probably as much or more, is due for the work of driving out Indians and freeing the state from outlaws than any other one man in Texas. The beginning of his career as a Ranger began in 1873, on an afternoon just after Mr. and Mrs.Thomas Phelps were murdered by Indians near Round Mountain in Blanco county. Several young men of the neighborhood gathered at the home of Captain Roberts father, and after considering every detail, appreciating the danger and facing the hardship, they formed a compact to wage a relentless warfare against the Indians. So well did young Roberts handle this small body of men in combatting Indians that when Governor Coke prevailed upon the Legislature to appropriate $75,000 for frontier protection and provide for the organization of the famous Frontier Battalion, Captain Roberts was commissioned a lieutenant and was soon awarded a captaincy. He was a charter member of the celebrated Company D, which was stationed in Menard county and worked in every direction.

Captain and Mrs. Roberts are held in loving remembrance by all of the surviving members of the Old Guard, and by all who knew them in the old days as well as those if the present generation.