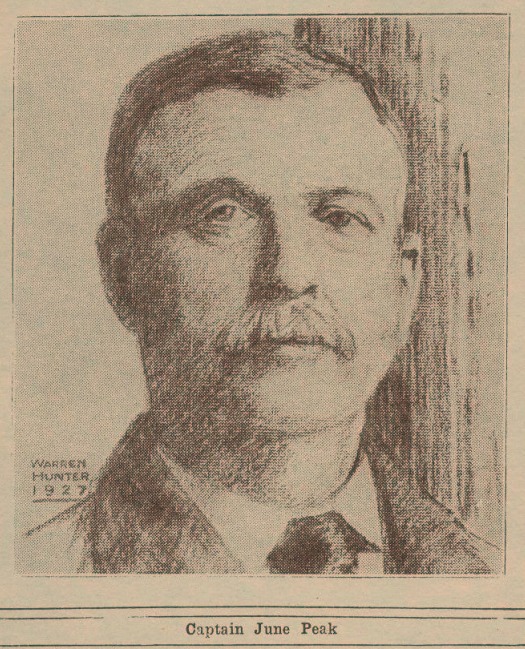 The men who won distinction in the Texas Ranger service were the forerunners of the present era of peace, development and prosperity that the state is now enjoying. Among the many Rangers who won distinction for their bravery and notable exploits in the performance of their duty were D. W. Roberts, June Peak, J. W. Sansom, C. L. Neville, Frank Jones, George W. Baylor, J. A. Brooks, G. W. Arrington, John R. Hughes, W. J. McDonald, Pit Dolan, Lee Hall, James Tay, G. W. Campbell, Neal Coldwell, John B. Armstrong, N. O. Reynolds, James B. Gillett, L. P. Sieker, Ed Sieker, W. W. Lewis, B. F. Gholson, J W. Ross, and many others. Most of these men are dead. Some were killed in the service, others succumbed to natural causes. A few of them are still alive and active. Among the notable survivors is Captain June Peak, who lives in Dallas, Texas, and whose portrait adorns the cover of this issue of Frontier Times. Captain Peak saw hard service on the Texas border for many years, fighting Indians and outlaws. He and his company of Rangers ran to earth the noted outlaw, Sam Bass, who was killed at Round Rock in 1878. He was in numerous battles with the Indians, especially at Round Mountain, and Bird's Creek, was wounded three times and several times had his horse shot from under him. Speaking of some of Capt. Peak's experiences, the San Antonio Express of May, 1879, says:

"Captain June Peak, the distinguished commander of Ranger Company B, is at the Menger Hotel. Captain Peak was once marshall of Dallas, and has held several responsible positions; he was appointed to the command of the company of rangers raised in the summer of 1878, especially In capture the Bass gang, which was operating at that time on the Texas Pacific railroad. Captain Peak captured several of those noted robbers, demoralized the band and finally drove Bass, with his two remaining pals, into the snare arranged by Major Jones at Round Rock—a snare that proved fatal to Bass. Since Captain Peak took command of the Ranger company he has kept his portion of the state in excellent order; he has hunted down robbers and murderers, driven horse and cattle thieves out of the country, utterly destroyed the business of the ‘road agents' and restored confidence in the minds of honest men. Its has been worth millions of money to the state."

Captain Peak's father, Jefferson Peak, was the son of Jesse Peak, who was a Revolutionary soldier in 1776. He was horn in Scott county, Kentucky, April 1, 1801, and was of Scotch descent. In 1826 he married Martha M. Reasor of Warsaw, Kentucky, who was of Irish parentage. In 1846 he was a Captain of Cavalry in Humphrey Marshall's Regiment, Kentucky Cavalry, Taylor's Army, in the war with Mexico, and fought in the battles of Palo Alto, Monterrey and Buenavista. In 1855 he moved his family from Warsaw, Kentucky to Dallas, Texas, by way of New Orleans and Shreveport, La., where he located and continued to live until his death in 1855. His wife died in 1890, and both now sleep in the Old Masonic Cemetery in Dallas.

June Peak was born at Warsaw, Kentucky, April 5, 1545, and moved with the family to Dallas, Texas, in 1855, reaching there on June 10th of that year. Here they were soon comfortably located in a good two-room log house, with a fine well of water, etc. Shortly after their arrival in Dallas, the elder Peak bought 220 acres of fine land two miles east of the Dallas county courthouse, paying $110 cash on this land, and at once began building the first brick house in Dallas county for his home, and in which he dled.

The early part of April, 1878, June Peak was commissioned by the Governor as a second lieutenant in the Texas Frontier Battalion for the purpose of destroying the Sam Bass gang of train robbers, and was promoted to Capsain in May following. By July of that year he had succeeded in disposing of the entire band, accepting Baas, Barnes and Jackson, driving these out of North Texas into the trap arranged by Major John B. Jones at Round Rock. He was immediately ordered to the frontier where he found the Indians very active, especially in 1879. A detachment of seven Rangers from his company, on the 29th of June and 2nd day of July of that year, had the last two engagements with Comanche and Kiowa Indians on the Texas frontier, at the head of the North Concho river and on the Plains 80 miles west, where Ranger Anglin was killed and two pack mules lost on June 29th recovered.

This list as it appeared January 1, 1924. Those marked * are dead, killed in action or died of sickness.

When Captain Peak resigned from the service in 1880, much regret was felt, not only by the members of Company B, but by the people, throughout West Texas and the state generally. The following resolutions were, passed by the Colorado and Concho Stock Association at a regular meeting:

"WHEREAS, this Association has been informed that Captain June Peak, of the Texas Rangers, has tendered his resignation, and intends to return to city life, upon the prayer of his father, we, in convention assembled, have this day resolved:

"That In proficiency of service, in effectiveness of performance, in constant attention to duty, in vigilance of inspection, in courteous demeanor, in gentlemanly bearing in noble generosity, in strictness of justice, tempered with true charity and correct judgment, and in real and true efficiency of discipline, Captain June Peak has shown himself to have no superior;

"That while we respect and honor the noble and filial affection that induces him to listen to and obey his father's call, yet we deeply regret his departure from this community, and the loss of his services as Captain of the Rangers

"That our best, wishes shall attend him in his new sphere of life, and he can have no greater reward than that his father shall value his services, and know and respect him as his services have been and are valued, and he is honored and respected by the various members of this association;

"That a copy of these resolutions be forwarded by the secretary to Captain June Peak, and that they be spread upon the minutes, published with the proceedings of this meeting.

And Company B in recognition of his valued services passed the following resolutions:

"At a meeting of the members of said Company, held at the above named place on the 10th day of April, 1880, it was unanimously resolved:

"1st. That it is with deep and heartfelt regret that the Company learns that their Captain June Peak has tendered his resignation of the Captaincy of this Company.

"2nd. That in parting with Captain June Peak we desire to say, that during the two years that he has been the Commander of our Company he has performed every duty to the State with promptness and fidelity, that he has shared with us every hardship and danger, fearlessly and unhesitatingly. In the camp and on the field he has always been prompted by a stern sense of duty, ever ready, ever willing; that he was ever courteous, polite and gentlemanly; ever eager and bold, keen and quiet, urgent and energetic; never daunted, never uncertain, fearless in all things.

"3rd. That the various members of this Company will ever hold his name in dear remembrance, and that our best wishes shall be ever with him, and our hearts will ever flush with delight whenever his name shall be mentioned, and a sensation of pride will fill our soul as we find our late Captain filling one trust higher than the other each in the ranks of fame and honor to which we feel he is destined to rise.

"4th. That a copy of these resolutions shall be forwarded to Captain June Peak, and another be placed on file in the Adjutant General's Office at Austin, Texas, and that they be published in the Galveston Daily News. (Signed) ED HAGEMAN. 1st Sergt. Co. B. Front Battl."