Captain Wright, a Gallant Texas Ranger - By J. Will Falvella 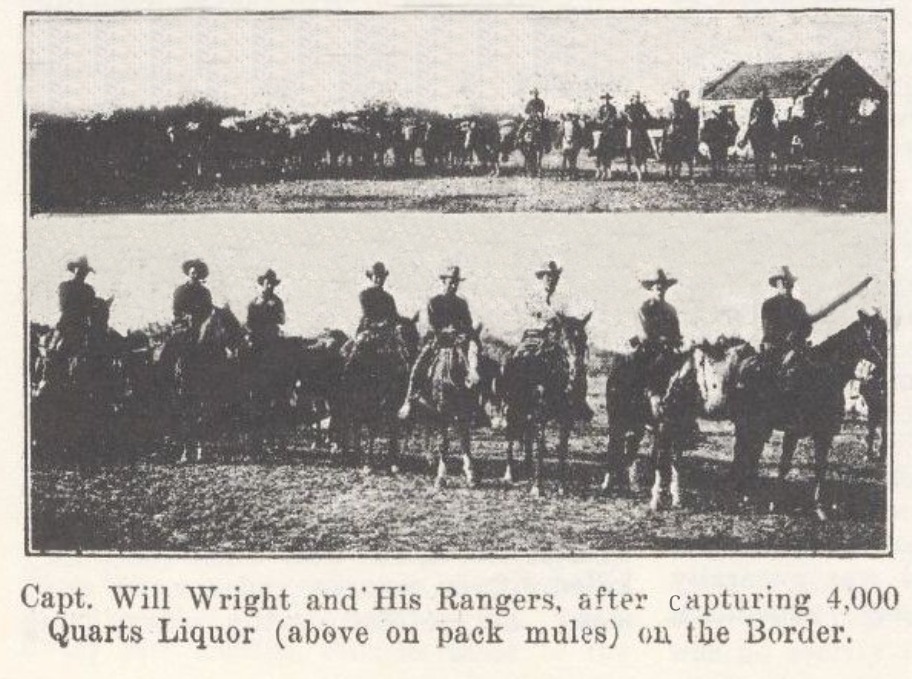 When the Republic of Texas ceased to exist in 1846 and Texas became one of the States of the Union, one of the first measures enacted by the newly-created State Legislature late in that year was by the passage of a bill calling for the establishment of a State constabulary to be known as the Texas Rangers.

From the very beginning of the organization of the first company, which consisted of a captain, a sergeant and a company of men anywhere from ten to twenty fully mounted and armed, the slogan of the Texas Rangers has been, "Go get your man. Get him alive if you can; dead if you must, but don't come back until you get him." And it was thus that when a ranger or a company of rangers started out to get some of the worst criminals that infested the State they went prepared to fight to the death, for often the criminal they were after was the leader of a gang of bad men who hesitated at nothing and such a thing as trying to kill those who pursued them was mere child's play.

The rangers of the early days of Texas had a hard life to lead, but they were of that mettle of which real men were made, and besides enduring all the hardships of weather in the great outdoors, suffering all the pangs of hunger that beset them, and encountering all the vicissitudes that could be their lot, they never flinched in their duty to their State or their country. Ever since their organization the Texas Ranger force has been under the command of the adjutant-general's department of Texas, and often instead of dispatching a company of State militia comprising a hundred or more to put down some disturbance or run down a gang of criminals, the adjutant general sent a company of six or eight trusty Texas Rangers on the hazardous missions and they did their work in short order and with credit to their organization. In years gone by, and even at this time, when the ranchmen of Texas needed protection from the gangs of marauding cattle and horse thieves that visited their herds they always asked for ranger protection and they got it.

The oldest Texas Ranger captain now in the service, and as brave and fearless a man as ever was in the service, is Captain Will L. Wright, commanding Company B, Texas Rangers, who makes his headquarters at Weslaco, Texas, near the Rio Grande, but who, with his company of a sergeant and ten men, "covers" the entire border country of Texas from Point Isabel and Brownsville to Laredo and Eagle Pass, a border front over 300 miles in length, in addition to scouting work done far inland. Captain Wright was born in Yorktown, DeWitt County, 56 years ago, and was reared and educated in that section of Texas. He was elected sheriff of Wilson County in 1902 and served in that capacity fifteen years.

While serving as sheriff in 1904 he protected a Mexican named Refugio Jarquez, who had been arrested for a heinous crime, against a mob of about 150 infuriated citizens, who tried to take the Mexican away from him. When the mob overtook him and demanded the man Sheriff Wright pulled his revolver, stood in front of the Mexican and told the members of the gathering, which included one of his dearest friends, that as sheriff he was going to deliver his prisoner to the county jail that justice might take its course and that the first man who laid hand on that prisoner would be a deadman. As Sheriff Wright held the mob at bay some other officers arrived on the scene and the prisoner was taken to the Wilson County jail. Some time later when this same Mexican had been taken on to the scaffold at Floresille by Sheriff Wright to be hung for his crime a priest was standing on one side of him saying a prayer and Sheriff Wright was on the other side with bowed head. Suddenly the Mexican whirled about and drove a spoon knife (a knife made out of a spoon pounded flat) into Sheriff Wright's left breast just above the heart. Sheriff Wright was rushed to a room of the jail and medical aid given him, while the execution was carried out by his brother.

In 1898 Will Wright entered the Texas Ranger service under Capt. J. H. Rogers, that being before he was elected sheriff of Wilson County. As a lieutenant in 1899 he was stationed at Cotulla alone when J. R. Davenport, conceded to be one of the most dangerous "bad men" in Texas at the time, took a dislike to Lieut. Wright and decided to make Cotulla too small to hold him. Davenport and another "bad man" of the town contrived to harass Wright and then "get" him. They fired a shot in one part of town and when Wright showed up they claimed a gun was discharged accidentally. Several other such things occurred until one day a friend of Wright's informed him that Davenport had boasted that he was going to "get" him (Wright) in short order. Wright armed himself with a revolver and Winchester and went down to the old P. & J. saloon in Cotulla, placed his Winchester just inside the door of the side room and sat down in front of the saloon and waited for Davenport to show up. In a short time Davenport. arrived and when he reached a point in front of the saloon near Wright he stopped when Wright told him to throw up his hands. Instead of throwing up his hands, however Davenport pulled his gun and fired, the bullet passing through Wright's coat. Wright had his gun in action by this time and Davenport was shot down and killed. The other bad man with Davenport, who was in the saloon, surrendered to Wright. At his examining trial for the killing of Davenport a number of witnesses gave testimony exonerating Wright.

In 1918 the commission of captain of Company B of Texas Rangers was issued to Capt. Wright by Adjutant General Harley.

In 1919 Capt. Wright was arresting a dangerous Mexican named Davila in Brownsville when the man suddenly swung about and stabbed him in the right breast, but a package of tobacco stopped the dagger and only a slight wound resulted. When the Mexican made a second lunge at him Capt Wright was forced to fire and kill the man.

Since his appointment as captain of Rangers, Capt. Wright and his company have had eight battles with Mexican smugglers and bootleggers, and while most of these running battles were at close range, neither the Ranger commander nor any of his men have been wounded or killed. In November, 1921, in five days Capt. Wright and his company captured a total of 4,200 quarts of Mexican liquors and 63 pack horses, while several of the Mexican smugglers and bootleggers were killed and a number wounded. One of these fights with bootleggers in 1921 was on November 17 at Colorado Chiquita, in Zapata County, on November 18 near Bruni, in Webb County, and on November. 22 near Bernaina ranch in Duval County—showing the vast range of country over which the Ranger company pursued the bootleggers with the contraband goods.

Capt. Wright and his Ranger company are still doing valiant work in preserving the safety of ranchmen and others and enforcing the laws, and the captain at this time is the oldest Ranger commander in the service from the standpoint of continuous work and still the same fearless man. Mrs. Wright and one son make their home at Floresville; another son, Charles H. Wright, is in the customs service at Rio Grande City, while another son, Will L. Wright Jr., is a member of his father's Ranger company.

Capt. Wright and his Rangers still use their ponies, as by this means they can penetrate the thickest of the dense chaparral that skirts the border of Texas and run down the criminal in his lair in some arroyo or secret place. When he gets orders from his commander in chief, the Governor, or the adjutant general to"go and get him," there is nothing on earth to prevent Capt. Wright carrying out the order if it is within man's power to do so.