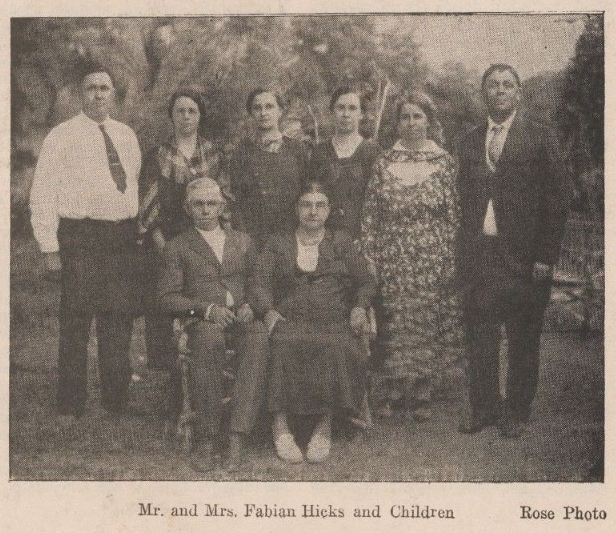 On July 7th, 1937, there passed from this life a real pioneer—a man born and raised in Bandera county, Texas, whose entire earthly pilgrimage was confined to the section wherein he was born, but whose hospitality and high character was known throughout Southwest Texas. Fabian Hicks was born near the village of Bandera, 1859, the son of Mr. and Mrs. F. L. Hicks. He was the eldest of ten children, all of whom were raised in Bandera. county, but only four now survive him, and they are still citizens of the county. His father, F. L. Hicks, came to Texas in 1855 from North Carolina, and joined the expedition under Captain James H. Callahan to cross the Rio Grande into Mexico to chastise a tribe of Indians that had been depredating on the frontier of Texas. After returning from this expedition he came to Bandera county, which was then a wild, unsettled region. Here he was married to Miss Hedwig Anderwald, and settled down to make this region his permanent home. He served as sheriff of this county for several terms, and was quite active in ridding the country of outlaws and undesirable characters, and often went on trail of Indian raiders. Such was the character of the father of the subject of this sketch, whose advent into this world was made at a time when this section was in every sense the frontier. The wild Indians had not ceased raiding, neighbors were few and far between, there were no schools, no comforts and it took brave and courageous men and women to endure the privations and hardships that were the lot of those who settled here. It was under such conditions that Fabian A. Hicks grew up in Bandera county.

On November 2, 1884, Fabian A.Hicks was happily married to Miss Mary L. Barrow, on a ranch six miles west of Tarpley, Rev. E. C. Gates, a Baptist minister, performing the ceremony. On November 27, 1890, they located on a ranch on the Seco, just over the line in Medina county, where they resided until death severed those earthly ties. For forty-seven years Mr. Hicks lived on this ranch, and his home was known far and wide for its hospitality. He and his good wife, and their talented daughters and manly sons made the guest within their portals to feel that this delightful home was a Texas home. They reared six children, some of whom are married and have families of their own but all reside nearby. These children are Dellas B. Hicks, Junius A. Hicks, Mrs. Emma Mazurek, Miss Mary Hicks, Mrs. Elma Padgett, and Miss Animate Hicks. There are fifteen grand-children.

Today that happy home is wrapped in the habiliments of woe. Only four days before the death of the beloved father, the wife of one of the sons, Mrs. Dellas B. Hicks, passed away, following an attack of measles. Father Hicks was stricken with measles also, and then followed an attack of pneumonia, which so weakened him that he could not, at his advanced age, survive the malady, and he passed away Wednesday morning, July 7th.

It was the writer's privilege to attend the Golden Wedding celebration of Mr. and Mrs. Hicks on November, 1934, at their home, on which occasion more than two hundred friends gathered to extend their congratulations and good wishes. Among those present at that time was Rev. and Mrs. Sid Williams, both of whom have since been called to their reward. Rev. Williams made a splendid talk there, congratulating the worthy couple upon their length of days and service to God and their country. Rev. W. H. Price, another old friend of the family, and Rev. J. W. Storms also made good talks, Rev. Storms telling how Mr. and Mrs. Hicks used to travel fifteen miles every Sunday by horse-drawn conveyance to attend church and Sunday school. A bounteous feast was spread under the shade of the great trees at the Hicks home, and enjoyed by all present.

The Hicks ranch nestles snugly among the glorious hills that enclose it on all sides. It is an ideal ranch home, a home that Mr. and Mrs. Hicks selected forty-seven years ago, far removed then from other ranches. Here their children were born and reared and taught to serve God, whose hand moulded the environs of their beautiful ranch location, and left the impress of His handiwork on every tree, flower, hilltop, streamlet and vale in that chosen region. Amid such surroundings those devoted children grew to manhood and womanhood, honoring that father and mother, and becoming as their worthy parents, consecrated Christians. It is that faith and hope, instilled into their young minds in childhood, by those good parents, that sustains them today in their sorrow and trial.

Thus a pioneer lived among us, and has passed onto that "bourne from which no traveler returns." It was a saying of Callimachus, “Tis ever wrong to say a good man died," and why should we announce that Fabian A. Hicks is dead? He was a good man, and God's finger touched him and he sleeps. He is not dead. The body—that noble form which God gave him—is indeed dead, and no more in this life may we again see the manifestations of his great soul in faith and love, and the activity of his strong and powerful intellect in thought and deed, but his noble deeds for God and home and country will continue to linger in hallowed influence about us, as the stars of evening continue to shine over the place where the sun goes down. There are times when communities and individuals and the whole land are called upon to stand with bowed heads in one common sorrow. By the passing of Fabian A. Hicks our section of Texas bows its head in solemn grief, because the form of him whom we loved has passed behind the veil, to be seen no more in this life. "The silver cord was loosed, the golden bowl was broken, the pitcher was broken at the fountain, and the wheel broken at the cistern, and the dust returned unto the earth as it was, and the spirit returned unto God who gave it."

It is a cheering reflection that this pioneer citizen, during the years that he lived among us, stood ever ready modestly to announce his faith in the Christian religion and when necessary to firmly maintain it. During his last fatal illness he was calm, patient, hopeful, trusting in God. He remembered the tragical sufferings of Jesus Christ, his Lord and Master, and did not draw back from its logical purpose. He called to mind that the Son of Man suffered for the good of men, and the disciple could not be above his Lord. He was willing for God to have His own way. His faith grasped the thought that God reigns, and what He wills is best. From whatever standpoint we look at this noble life, we discover excellence. As a citizen he was faithful to duty. He was affable, courteous, generous, thoughtful, and great-hearted. In his home he was kind, devoted, manly—at once the husband, the father, and the gentle companion. As an evidence of this look at the vast concourse of citizens who went around his bier; look at the splendid family that sat weeping and mourning the departure of their loved one. Those strong young men, those queenly daughters, that devoted wife, all announce the splendor of the character of the man called husband and father.

He is not dead, but sleepeth; and one day we hope to see him again.