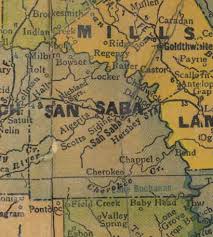 THE EIGHTIETH anniversary of the founding of San Saba county is being commemorated by San Sabans during 1934 in a series of programs, articles written on early days of San Saba county, possibly, the presentation of a pageant, and many reunions including the eleventh annual San Saba County Old Settlers' reunion here in August.

The first permanent white settlers to arrive in the county were David Matsler, wife and son who came from Burnet county here on November 7, 1854 and settled on Cherokee Creek near the present town of Chappel. The original homestead of the Matslers is owned by the youngest son of the couple, Tom Matsler, who has one of the best improved pecan orchards in this section of the state.

Some seven years prior to the arrival of the first family of settlers, or in 1847, Count Meusebach of Germany in company with thirty nine other former students of the German universities, including Gustave Schliecher, had purchased the entire San Saba River valley from the Comanche Indians for the sum of one thousand dollars' worth of trinkets, guns, and other paraphernalia. These men, known as the "Colony of Forty" had purchased the land in this adjoining counties for the purpose of carrying on farming and stockraising on the most scientific methods but location was beyond the settled portion of the country, and the Indian depredations and other causes soon rendered the enterprise impracticable. They removed to San Antonio from their settlement southwest of here.

In the year 1855 the Simpson Creek community, three miles east of San Saba was settled by Joe and Jim Barnett, T. P. Hamrick, Sam Linn, D. A. Harris, W. W. Crawford and Jim Crawford, while a few miles to the west of the present city of San Saba, four Harkey brothers with their father, J. M. Harkey, founded the town and community of Harkeyville with the help of Jackson Brown and J. McDaniel. In the Richland Springs section James Wood and four sons, with a friend, A . Woods, came in 1855 and soon were joined by "Pony" and "Beardy" Hall, Pick and Bob Duncan. In that same year and for the next few years, the Sloan section of this county was settled by Dr. Sloan and two sons, Dr. Allen, Jerry Fleming, M. H. Wadsworth, Henry W. Ellis, A. J. Rose who ran the Rose Mill there for many years, the Lathams, Hendersons, Thaxtons and others. Around Cherokee in the southern part of the county were Dr. Elliott, Capt. John R. Williams who was killed by the Indians in the Babyhead Indian fight, Hanna, Hext, R. W . and G. J. Gray, Kuykendall, Barbers and Montgomery.

Possibly the man who stood foremost in the founding of the town of San Saba and who ranked high in the leadership of that town for more than fifty years was Dr. J. C. Rogan who had finished a medical school in Baltimore, Maryland and came with his wife and two children from Tennessee to Bastrop, later coming to this section in 1855. He was first postmaster here, first superintendent of a Sunday School and the leading physician here for many years. Twenty-six orphans were reared in his home by his wife and after the rearing of their own two. Other pioneers arriving during the fifties were Dr. J. C. Hudson, J. S. Williams, G. B. Cooke, Freestones, W. T. Murray and T. W. Ward who were the founders of the Ward-Murray Bank, now City National Bank which is in its fifty-first year of service to the county, J. H. Brown, Geo. Brown, E. Estep and a half dozen others.

Campmeetings and dances were the chief sources of diversion for the people during the period of the Civil War and following. The Seventy-sixth Annual Methodist Camp meeting will be held on Cherokee Creek near Chappel in August on land given for the purpose by Mrs. David Matsler, Mrs. E. E. West and It. H. Walton. Half of the marriages in the southeastern part of the county have their courtships originating during the campmeeting, which always begins on the Friday night before the third Sunday night in August . Divorces are very rare among those who regularly attend this gathering. Among the charter members of this congregation are Mrs. Elizabeth Houston Relp, and George Matsler, both of this county . Among other charter members for the various churches in the county are Mrs. S. W. Walker, Methodist Episcopal South; Mr. and Mrs. W. B. Leverett, Presbyterian, U.S.A .; J. D. Estop, Church of Christ; Mrs. May Ward Roman, Catholic, and Mrs. John Brown Carroll, who was one of the first members to be baptized into the Baptist church, all of San Saba. N. R . Sloan of San Saba are among the earlier members of the Presbyterian church at Sloan or Rock Shoals.

Among the oldest business enterprises of the city all of which have done business for fifty years or more are the City National Bank, the J. W. McConnell Grocery Company, J. D. Estop Hardware and Implements, the J. M . Carter Estate, and the E. E. Risien Pecan Nursery.

San Saba a modern little city with a population of 2,500 has a municipally-owned water and sewerage system, all principal streets paved, a $100,000 hotel, three school buildings with an enrollment of more than 800 students, chamber of commerce, Lions' and Rotary Clubs and other civic organizations, and with many thousands of dollars invested in church buildings is known as the "City of Churches."

For a limited time our most popular product, 352 complete issues of J. Marvin Hunter's FRONTIER TIMES MAGAZINE is 1/2 price!!!
Normally $129.00, now $65.00 when you use coupon code "half off" (without quotes) at checkout!
That's over 20,000 pages of rare TEXAS HISTORY and FRONTIER GENEALOGY, written by those who lived it!
‹ Back