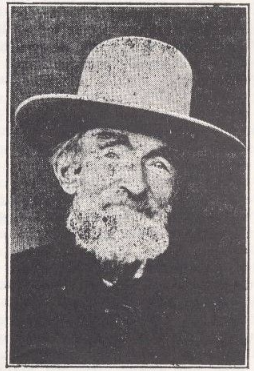 George Hay was born at Erskine, Renfrewshire, Scotland, March 17, 1836. With his parents, he sailed for America from Liverpool, England, Sept. 10, 1841. They came across in a sailing vessel, the Tierien, and landed at New Orleans October 19, 1841, from whence they went up the Mississippi to St. Luis, where they tarried but a short time, then proceeded to Nauvoo, the Mormon city in Illinois. They remained at Nauvoo until 1845, when the family went back to St. Louis, where the elder Hay died, and in the fall following the widow with her children moved to Keokuk, Iowa, later moving to Clark county in that state. In September, 1848, hearing of the wonderful opportunities in Texas, and seeking a land free from the antagonism at that time directed against the Mormons, the family with others started to Texas in wagons drawn by mules. A long trip was ahead of them and the way was beset with all sorts of dangers and perils, but fearlessly the little band took up the journey. George Hay was then a small boy, 12 years of age. When the party reached Kansas City, then a very small town, they were joined by a small family named Johnson and a man named Spencer Smith of Council Bluffs, Iowa. Their destination was Zodiac, a Mormon settlement on the Perdenales river, three miles below Fredricksburg, which they reached safely after nearly three months on the road. Here the Hay family remained until 1850. A Mormon settlement had been made near Fort Groggan in Burnet county, where a mill was erected, and the place was afterwards called Mormon Mills. Mrs. Hay and her children moved there, where they tarried until the spring of 1853, when they moved over to the Packsaddle Mountain vicinity to graze their cattle. In company with a large party of Mormons headed by Elder Lyman Wight they decided to transfer their location to Bandera county, reaching here March 1, 1854. Elder Wight's company numbered about 250 souls and when they arrived in Bandera county they found only a few people here, the Hadrians, Milsteads, T. L. Odem, P. D. Saner, Mrs. Rees and sons, Charles de Montel, and others. In speaking of his arrival in Bandera, and subsequent events, Judge Hay said:

"This was a beautiful country then, a wilderness it is true, but inviting and offering our people wonderful possibilities. Charles de Montel had a horsepower saw mill with a circular saw, and the men of the community were nearly all employed in getting out cypress timber and working at the mill. August Pingenot supplied the camp, for Bandera was but a camp then, with game. Here I met Amasa Clark, who was in the employ of Milstead. This was in 1854, and the friendship that was formed then has endured to this good day, and grows with the passing years. Here I also met DeWitt Burney, an uncle to our present district judge. August Klappenbach afterwards built the first house in Bandera where he kept a store and post office. This house is still standing and forms one end of my residence. It was built in 1855, and was constructed of cypress lumber sawed at the mill here, the carpenter work being done by John Dugos, the father of Kasper and Christian Dugos, worthy citizens of our town. The elder Dugos had just arrived from Poland with the Polish colonists, and could not speak English, and had to receive his instructions as to dimensions and plan of the building in the sign language. If I remember rightly the Polish colonists arrived here February 3, 1855, and as they were destitute, they had a hard struggle for a number of years, but perseverance and the realization that they were living in free America helped to get them on a footing which they have since maintained.

"After remaining here until the fall of 1854, Elder Wight and his company moved down the river about twelve miles where they established a settlement, known for many years as the Mormon Camp, where they remained until 1858. Elder Lyman Wight died and was buried there. The site of his camp is now covered by the waters of the Medina Lake. With their leader dead, the Mormons then scattered, some going to the Indian Territory, and several families remained here; among those who chose to remain in this section were Andrew Huffman, Mrs. Janet Ballentyne, Abram Moncur, Joseph Goodale, Meachem Curtis, and others whose names I can't recall just now. Today about all of them are gone except myself and my wife.

Bandera county was organized in 1856. O. B. Miles was first chief justice, William Curtis was sheriff, James P. P. Poole was the first county clerk. The first term of court was held in a building in the western part of town which was used as a school house. I was deputy clerk under Poole, but did not have very much to do. Afterwards I was elected county clerk and served for several terms. Finally I decided that I did not want the office and hustled like everything to elect my successor P. D. Saner. I also served several terms as assessor and collector.

"In the fall of 1861 I became associated with James Booker Davenport in the general merchandise business in the house now occupied as a dwelling by our Sheriff, Henry Stevens. Later Mr. Charles Schmidtke came into the firm and it became known as the Davenport, Schmidke & Hay, dealers in general merchandise. Our business thrived, but later Mr. Davenport retired and Schmidtke & Hay conducted the business until 1874, when H. H. Carmichael bought an interest in the firm and we erected the stone building now used as a warehouse by the Bandera County Ranchmen & Farmers Association. Mr. Schmidke retired from the firm and Carmichael & Hay continued until 1903, when we met with reverses, and almost in a twinkling the crash came and we were swept off our feet. Mr. Carmichael died herein 1913. Later I moved to Hondo, where I lived for ten years and engaged in the confectionery business there.

"In 1861, when the Civil War came on, almost every man between the ages o f 18 and 45 were enrolled in the Frontier Battalion for frontier protection. I was commissioned a lieutenant, but being an officer made no difference to me. I went into ranks, stood guard and performed all the duties of a private. I have never received a cent for my services and none of my comrades ever received a cent of pay. We had to furnish ourselves, too. Some ammunition was supplied, but it was of such poor quality as to be almost worthless. The Indians often made raids down into this settlement and below here, and we would take their trail, sometimes inflicting severe punishment on the red rascals. There are many thrilling incidents connected with the history of this country. Many tragedies have taken place, many hardships were endured by the first settlers, many of the old timers have passed over the great divide to return no more, many of our sons have gone out and won high places in the world, many of our daughters have married and raised manly sons and lovely daughters who are today filling places of usefulness in different parts of the country. I am proud that I can look back upon the sixty-nine years that I have spent here and realize the wonderful changes that have taken place, all for the betterment of mankind and the glory of American manhood and womanhood that brought these things to pass.

"Judge Hay is now 88 years old. He is quite active, his mind is very clear, and he recalls dates and events with the precision of a much younger man. He has ten children living, 41 grandchildren and 30 great grandchildren. His living children are Mrs. Amanda Elam, George A. Hay, Mrs. Georgiana Risinger, Frank T. Hay, Mrs. Mary Langford, of Bandera, Charles William Hay of Coalinga, Calif; Joe M. Hay of Hondo, Mrs. Ola Croisdale of Austin, John Hay of San Antonio, Mrs. Jane. Currie of Los Angeles, Calif. Another daughter, Mrs. Ora Smith, died in California during the influenza epidemic and was brought home for burial.

Judge Hay is spending his declining years at the old family homestead in Bandera, where for many years he and his good wife kept open house to the traveling public, and entertained many distinguished visitors under their hospitable roof.

Mrs. Hay, before her marriage, was Miss Virginia Minear. She is a native Texan, having been born in Fannin county near Bonham, March 25th, 1844. She came to Bandera when about eight years old with her widowed mother. Her father was foully murdered in Coryell county, where he had taken up a homestead claim. The burden of years rests lightly upon this good old mother and she gets about as lively as a middle-aged woman. She attends to all of her household duties, and has a pleasant, cheerful greeting for all visitors.

Over 20,000 pages of rare Texas history and genealogy written by those who lived it, here.