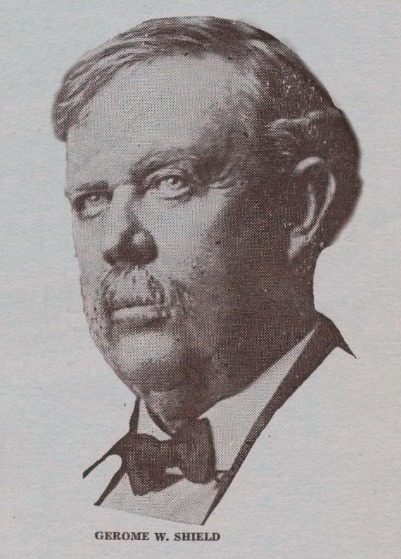 GEROME W. SHIELD, whose death occurred at San Angelo, Texas, January 3rd, 1932, was a typical Texas sheriff of the old school. He retired from office thirty years ago, but during the years that he was sheriff of Torn Green county he was a terror to violators of the law, and when he went after a man—a cow-thief or a desperado, he always brought him in, dead or alive. He was absolutely fearless in dealing with lawless characters, and no matter how "tough" or how "desperate" the criminal happened to be, 'Rome’ Shield did not hesitate to take his trail and follow it until he got his man.

Before he became a sheriff he was a cowboy and ranch-man, and after he served four consecutive terms as sheriff of Tom Green county, he went back to the ranch life which he loved so well, and followed stock-raising until he died.

He was born in Panola county, Mississippi, March 23, 1862, and came to Texas with his parents in 1869. The family settled in Hunt county, but in 1874 moved to Coleman county and settled near Trickham. Ten years later, June 3, 1884, 'Rome’ Shield located in Tom Green county securing work on the William Hewitt ranch on Live Oak Creek. He remained on this ranch until 1888, when he was elected hide and animal inspector, an important office in those days. His efficiency as hide and animal inspector from 1888 to 1892 won him for sheriff's office. He arrested many cattle thieves and practically put a stop to their operations in the Concho country. That section was strictly a stock-raising region in those days, and burning out cattle brands was a method used by the thieves, but Mr. Shield is credited with breaking up many of the bands who operated throughout that section.

He died while asleep. His health has been good until he suffered the fatal heart attack. All West Texas mourns the passing of this typical Texas sheriff.