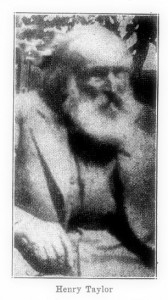 A FEW weeks ago it was my pleasure to visit one of the grand old pioneers of the Sabinal Valley in Bandera county, Texas, Captain Henry Taylor, early day ranchman, Confederate veteran, and minute man, now in his 90th year. Although a cripple and almost helpless, this fine old gentleman has a good recollection of stirring events that transpired when he first settled in the beautiful Sabinal valley, and he told me of conditions that existed there in those trying times, when the Indians made frequent raids, killing settlers and driving off stock. Captain Taylor makes his home with his daughter, Mrs. J. H. Baumer, where he receives every attention that a dutiful devoted daughter and her family can give.

He was born near Verona, Missouri, September 7, 1841, the son of Robert and Martha Taylor. He came to Texas with his father in 1861, and located near Weatherford, and a short time later enlisted in Burns Regiment, Company F, Crockett Howard captain, and became a sergeant in that company. He surrendered at Shreveport, Louisiana, where he received his discharge and returned home afoot. After remaining at home a while, he went to Montana and worked on the cattle ranges for a year or two, then went to California, when he found employment with an old friend of the family, Winfield Wright, who lived near Petaluma. Here he was joined by his brother, John Taylor, and they decided to return to Texas and buy a herd of cattle to drive to California, Winfield Wright advancing the money with which to buy the cattle. It was a long way to Texas, and they decided to go to San Francisco and take a boat, expecting to land on the Gulf coast of Texas, but after setting sail they found they would have to go via the Isthmus of Panama, and from there were carried to New York, then took to New Orleans, and from there to Galveston. They arrived in the Sabinal Valley sometime in 1869, where they purchased, from different parties 900 mixed cattle. Mr. Taylor says his recollection of that long, roundabout trip to Texas is rather hazy, but he has not forgotten the trouble they had in driving the herd through from Texas to California. On this trail drive they had employed fifteen cowboys, and after rounding up and receiving the cattle they started west, crossing Devil's River in the vicinity of Howard's Well, and the Pecos was crossed at the Horsehead Crossing, the herd passing through El Paso, or Franklin, as that city was then called, going up the Mimbres river to Silver City, New Mexico, and then on to the Gila valley in Arizona. The cattle were wintered near Tucson, and in the spring the drive was resumed, the herd swimming the Colorado river at Yuma, Arizona, and driven to range which had been leased near San Bernardino, California..

The Indians did not molest them on the trip, but they saw several bands of the redskins, and were constantly on the alert for trouble with them. Other drivers had been attacked in Apache Pass, and Cochise, the noted Apache chief, and his band were committing depredations and giving a lot of trouble to immigrant trains and cattle drovers along the route.

After ranging their cattle for sometime they decided to sell the herd if a buyer could be found, and return to the Sabinal Valley in Texas, which they had decided was about the most desirable spot to live. They had a hard time making ends meet. Money was scarce and they could not pay their hands until they could sell some of the cattle. Some of the hands became dissatisfied and laid a plot to murder the Taylor brothers, but they became aware of the plot and made preparations to protect themselves. Evidently the plotters became suspicious and the expected attack did not take place.

Captain Taylor recalled how the supply of rations became exhausted, and he sent an Irishman on a donkey to get some supplies at a trading point several miles away. The Irish had a habit of getting drunk whenever he went to the trading point, and the hungry cow outfit offered wagers that he would get on a big drunk and fail to bring back any supplies. The unexpected happened, for the Irishman stayed sober and traded a gun for grub and came back to the cow camp with supplies to run the men for several weeks. It was about this time that Captain Taylor discovered the plot that was hatched to murder him and his brother. Within, a short time he managed to get enough money to pay off and let the dissatisfied hands go. After he came back to Texas, he says, he met one of these plotters in San Antonio. Finally he sold the cattle, and after paying Winfield Wright the amount they had borrowed from him with which to purchase the cattle, he and his brother had $1,000 left.

The drive from Texas was quite an eventful one. Captain Taylor says, and they had to endure all kinds of weather, with the stampedes, swimming swollen streams, and be on the watch for Indian raids, and he was glad when the cattle were finally turned on range near San Bernardino. One of the hands, named Dick Stegler, died on the trip and was buried by the side of the trail, the body wrapped in a wagon sheet.

After disposing of the cattle, Captain Taylor was ready to head for Texas. A man named Joe Matthews agreed to accompany him and they came through horseback, he riding a mule and Matthews riding a horse. They were on the trip sixty days, and managed to cover the long distance without being attacked by Indians. They reached Waresville, now Utopia, in 1871, and his brother, John Taylor returned to Texas the next year.

Captain Taylor says when he came into the Sabinal valley to make his home some of the settlers he found there were John Ware, Glidden Thompson, Ben Highsmith, Aaron Anglin, Chris Kelley, Bob Kincheloe and others. Of this number John Ware and himself are the only ones remaining, he being 90 years old, and John Ware is 92. Shortly after reaching the Sabinal valley he and Joe Matthews engaged to run the Chris Kelley cattle near Sabinal on shares. One evening he left Sabinal about sundown and as he was returning home he passed a skirt of timber in which a band of thirty Indians were concealed, but he did not know of their presence. When he reached home he found that the Indians had stolen thirty of his cow horses. The band had been seen by some Mexicans, who had fled when the Indians appeared.

At that period of time the country was open, and the range was good.

Captain Taylor was married in 1873 to Miss Maggie Riley at D'Hanis, Texas, and shortly after he was married Gideon Thompson told him to build a fence on his land "from mountain to mountain," across a canyon, and put his cattle in the canyon. His wife had about 300 head of cattle and he took some of Mr. Thompson's cattle on shares and went into the cow business. Later he acquired a good body of land, on which is now located the Taylor school house, and for many years followed the ranch business. Eight children, were born to Mr. and Mrs. Taylor, two of whom are now dead. The children are Mrs. Sarah Baumer, Mrs. Mattie Fisher of Utopia; Mrs. Madge Carter, (deceased), Mrs. Janie Duke of Del Rio; Mrs. Carrie Cooper of Dallas; Mrs. Hattie Kelley of Del Rio; Mrs. Oln Fuller, (deceased); and Robert Taylor of Utopia. The wife and mother died February 27, 1891, and Captain Taylor kept his children together until they grew up and married. For the past twenty years he has made his home with Mr. and Mrs. J. H. Baumer. He has 31 grandchildren and 7 great grandchildren.

In his wheelchair he sits before the fireplace in the delightful Baumer home and in memory lives over the stirring scenes of long ago, looking back upon the years that have flown and marveling at the wonderful changes that have taken place since he was an infant in his mother's arms. "The changes were not so noticeable the first fifty years of my life,” he said, "but the last few years they have been wonderful. The automobile, and I have bought four of them, speeded travel up. Now the airplane is making faster time. And the radio is beyond my understanding." When asked if he would care to ride in an airplane, he answered, "No, I have no desire to fly; I will stay on the ground."