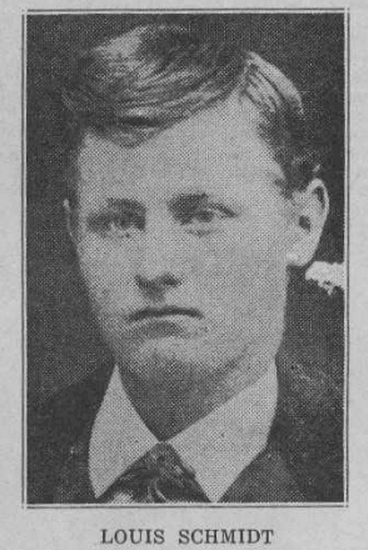 In 1872 a sixteen-year-old lad by the name of Louis Schmidt drifted into Mason. He boarded with the sheriff, acted as jailor and did other odd jobs, working most of the time in a blacksmith shop owned by Jim Finney, this blacksmith shop being where Ed Smith's residence now stands, and just across the street from the Doole store. About that time a fellow by the name of Tom Faulkner killed a man in Loyal Valley, shooting the man at night through the cracks in his house. Faulkner was arrested and put in the old jail, and as a double precaution the prisoner was heavily shackled. One night the jailor took the prisoner his supper, but just prior to this some one had delivered a file to the prisoner, and when the jailor opened the door the prisoner grabbed him and a big scuffle ensued. This desperate man was too much for the mere boy and he soon got away, still dragging the chain on his legs. The sheriff lived but a short distance from the jail, and he was quickly warned, and caught the prisoner before he got very far. However, some days later some of the prisoner's friends took crowbars and sledgehammers, broke a hole in the jail and this time the prisoner made good his escape, and was never heard of again.

This man Louis Schmidt is now the dean of Mason merchants, having been continuously in business forty-three years. In 1875 young Schmidt went to work in Charlie Wahrmund's blacksmith shop in Koocksville. After a few months' employment there he drifted to a few other places, finally landing at Ben Ficklin. This place was about three miles south of Fort Concho, and was then a place of considerable importance, San Angelo not being in existence at that time. Ben Ficklin was the main division on the El Paso and San Antonio stage line. At this division they kept a herd of wild Spanish mules, a number of coaches, and maintained a considerable blacksmith shop in which repair work was done and the mules kept shod. Schmidt got the contract for doing the mule shoeing and blacksmithing for the Fort Concho-San Antonio end of the mail line, or rather for the Ben Ficklin-San Antonio end. The blacksmithing he could attend to without any help, or trouble, but when it came to shoeing the wild mules it was different. To be shod they had to be roped, thrown down and hog-tied. Later he went with the sub-contractor under Ficklin on the line from Fort Concho to El Paso. In this new position it was necessary to make frequent trips along the line from Fort Concho to El Paso. In fact there wasn't any El Paso at that time, the name of the place being Franklin. With the exception of Fort Stockton and Fort Davis and the few stage stands along the way, there wasn't a house between Fort Concho and El Paso. It was buffalo, antelope, Indians, isolation and desert. Water was the scarcest article in that region at that time, and the stage line had to go by a rather indirect route for a distance of more than 500 miles in order to have water stations. In 1878 Mr. Schmidt got enough of that wild west business, returned to civilization, and bought the blacksmith shop at Koocksville. Koocksville, just one mile west of Mason, was on quite a boom at that time. William Koock was doing a big mercantile business there in a picket house. Never before, never since and never again will there be as much gold in the country as there was in Koocksville alone from 1876 to about 1888. Koock's store was the cattlemen's headquarters for this section of the country. Here and to Rank's store, the cattlemen came for their supplies. Principal among the early buyers were such men as Col. Ike Pryor, Doe Burnett, and Major Smith, and others.