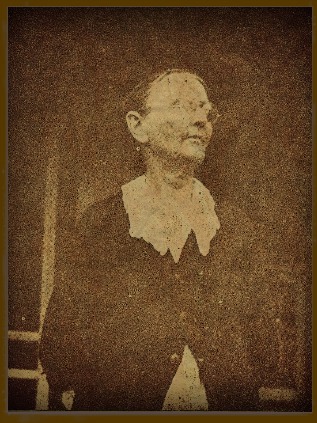 There is now living in London, in the northeast corner of Kimble county, on the waters of the Big Saline Creek, one of those rare survivors of pioneer days whose babyhood was spent during the trying days of the Civil War, who remembers the pinching poverty, whose memory is as bright as brilliant sunshine, whose eighty-three years sit lightly on her shoulders, and is not reflected from the silvery locks of her hair. Her name is Mary E. Bell. She lives happily amid surroundings with which she has been familiar for over fifty years. She was known in Lavaca county as Mary E. New, a daughter of William New, who lived eighteen miles south of the small town of Hallettsville, at Hope. Here she first heard the rumbling of the war, and by the time she could talk, the red glare of battle had flamed over the Southland and the men folks had to go to war. The woman were left to do the work and carry on. All the privations known to frontier conditions obtained in Lavaca, but with stout hearts the women met the situation with brave souls. The New home had its one big room for living purposes, but the kitchen was separate, a few feet from the main room, which was the family room parlor, bedroom, living room, and dining room on all occasions. There were no cook stoves in the county and no sewing machines. There was the trundle bed under the big bed in the living room, and at night the trundle bed was rolled out into the center of the room and the small children piled in till it was full. Quilts, blankets, and robes were kept stacked up in a corner of the room. There was a big fireplace with its old black log. It was kept burning through the night by heaping ashes on the coals so it would smoulder till morning. There were no matches. When Mary New's mother ran out of fire, one of the children was dispatched to Grandpa's place, one-fourth of a mile away, with a tin bucket, to get a chunk of fire which was carefully nurtured on the way home to prevent its dying before its arrival. It was not often that the fire was permitted to expire or "go out"at the New home, but this sometimes happened in the best regulated of frontier families. The writer of these lines has often had to trudge half a mile to a neighbor's for fire with which to cook the morning meal.

They had no cook stoves, no sewing machines, no matches, and that is not all! During the Civil War there was no coffee. Did the pioneer woman sit and pine and surrender? Not for a minute. She had never seen a cookstove and did not know what it was; she had never seen a sewing machine and had not even dreamed of one; but she did know what coffee was and they were all regular coffee topers. When the war stopped this, Mrs. New cut up sweet potatoes in small bits, strung them on a string, dried them, and parched them like coffee. Then they were ground in the old coffee mill. There you were sweet potato coffee. In some sections the pioneers used barley for coffee.

The biscuits were cooked on the "old baker"' on the old fire place and they would make a modern biscuit look like the New Deal currency in comparison with an old twenty-dollar gold piece that you did not have to hide. An iron rod ran across the fire place and the old pot likker pot hung from it and this was the receptacle for hog's head, for jowls, for greens, and at the bottom of the pot was that elixir of pioneer life—pot likker.

There was the old loom and Ma New wove all the homespun dresses that she and her daughters wore. Little Mary can still remember when the old spinning wheel sang its song in the New frontier home. The homespun was made into breeches for the men and the linsey woolsey for the women. Their first calico dresses were obtained after the war.

The News had no money, but they had that current money of the ages—eggs. Your pioneer hen was the greatest mint in the world. The New children had their favorite hens.

After hogs were killed and the meat placed in the smoke house, there began a systematic saving of all scraps of bacon rinds, scraps of fat, old lard, etc. and all these went into the box or barrel that was universally known as the "soap grease" box or barrel. At the same time that saving of "soap grease" began, the old ash hopper was cleaned, filled with new ashes, inundated with pure water, and there began that frontier slow process of collecting the lye for the spring making of "soft soap."

The old ash hopper was made of boards four feet in length, inserted on end in a V-shaped trough, cut out of a log some twelve to eighteen inches in diameter. The log was slightly inclined so that the lye would course its way into the crock at the lower end of the log. These crocks of lye and the barrels of soap grease were kept till the spring when the good housewife by the alchemy of experience converted the caustic lye and the grease into a pot of soft soap that looked while hot like a jar of molasses. After the soap partially cooled into a thick mass, it was poured out on a plank and allowed to solidify. It was then cut into slabs or blocks or cakes, and placed on a sack to dry out. ~ l was stored away and kept ready for "wash day. Woe be to the dirty shirt that thought it could withstand this old fashioned frontier soap when the "battling stick" and the strong muscles of Mrs. New and her daughter Mary bent over rubbing board or gave the cloth that frontier twist and wrung the water out.

The girls, Mary and the others, milked the cows in the old piggin and poured it in the old cedar bucket, and churned in the old fashioned dasher churn. There to this good day of 1941 Mrs. Mary Bell has the dasher of the old churn.

After the war Mary New studied McGuffy's readers and Webster's old Blue Back Speller, but her most vivid recollection is of the split log bench on which she sat and worked her "sums" in arithmetic on the slate, pieces of which she treasures to this good hour. Blackboards had not been heard of. During the winter the old square dances were held at the homes of neighbors. When asked about the old dance tunes, she recalled first of all that gallant old time "Turkey in the Straw. " She also remembered "Cotton-eyed Joe" and "The Arkansas Traveler. "

Mary New married William Bell and moved to Kimble county in 1889, fifty-two yews ago, where she has been a factor of the west. For fifty years she has been in old Kimble, but came after the Indians had ceased to be a menace.