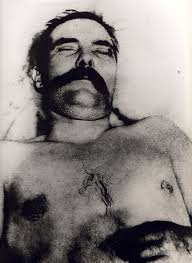 In the April number of Frontier Times I read a very interesting sketch about John Wesley Hardin, written in 1911 by John Warren Hunter. I probably knew as much about John W. Hardin as any other Texan. I witnessed the tragedy when he killed Morgan at Cuero, and I kept pretty well up with his whereabouts and doings after I first made his acquaintance in Cuero in 1874, shortly after he came to DeWitt county and attached himself to the Taylor crowd. Jim Taylor was their leader at that time.

John Wesley Hardin had just killed the sheriff of Comanche county, and being a first cousin to Jim Taylor he naturally joined his crowd, well knowing he could bid defiance to all sheriffs in the state with the Taylors at his back. He was a good looking man, quiet and unassuming. In stature he stood about five feet ten inches, weighed about 160 pounds, had brown hair and eyes, and wore whiskers always neatly trimmed. In manners he showed good raising.

My father for many years kept up two cattle ranches, corrals and boarding houses for the cattle shipping trade, the home ranch being located on the Agua Dulce, a tributary to Big Chocolate Bayou twenty miles from Indianola and six miles from Port Lavaca. The other ranch was situated five miles from Indianola. At each ranch there were six or seven large corrals, each having a capacity of holding 500 large steers. When the G. W. T. & P. Railroad reached the present town of Cuero there followed a boom, and the town grew almost overnight. John Swartz, a butcher of Indianola, wanted to go into business there, but did not have sufficient money for the enterprise, and my father agreed to set him up in the butcher business, stipulating that the firm was to be a neutral concern, showing no preference in who they bought their fat beeves and muttons from. The new market proved popular from the very start, and the heavy purchases obliged the butcher to employ herders to take care of the beeves secured as they could not be turned loose on the range.

On the day of Hardin's arrival Jim Taylor brought him direct to Hatch & Swartz's market and introduced him to my father, John Swartz and myself. I thought him a fine looking cowboy. He wore goat-skin leggings, white linen shirt, a silk handkerchief in lieu of a collar and cravat, velvet jacket, cowboy shotmade boots, and a silk sash. In this sash he had shoved a naked Colt's 45 pistol, leaving his belt and holster on his saddle. Jim Taylor and Hardin were dressed very much alike with the exception of leggings, Taylor's being heavy leather and better suited for a chase through catclaw thickets when running cattle. I had known Taylor for a number of years, and to know him was to like him—nothing of the desperado in his make-up.

Shortly after this there came into Hardin's life a controlling influence that really worked for good. I refer to his marriage to an excellent woman, who, if I remember rightly, was the daughter of Neil Bowen. I may be mistaken in the identity of this lady, but there is no mistake in the influence she wielded over John Wesley Hardin for his good. While it began in DeWitt county, this influence followed him to Florida, and from there back to Comanche county, Texas, where he received a sentence of twenty-five years in the penitentiary for the killing of the sheriff of that county, and after beginning his sentence at Huntsville that influence was so strong that Hardin professed religion and opened a Bible class among the convicts. He made friends with the penitentiary warden and other prison officials, and proved himself a model prisoner. Sometime after he began serving his sentence a number of desperate convicts planned to overpower the guards and escape, and because of his friendliness to the prison officials Hardin was kept in ignorance of the plot. The plan was to overpower and kill a certain number of the, guards, capture the arsenal, then arm and liberate all long term prisoners. And but for John Wesley Hardin the plan would have been a complete success. As soon as the rush started the convicts siezed guns and began shooting down guards and were rapidly gaining flight when the warden rushed to Hardin's cell and asked him if he would help put down the insurrection. He told the warden to arm him and he would do all he could. They hurried to the attack and began pouring a deadly fire into the convicts and when they saw Hardin with the guards and saw several of their men go down before the accuracy of his aim, they began to weaken and the handful of guards, with Hardin's help, drove each surviving criminal back to his cell. When all were safely locked up Hardin surrendered his borrowed gun to the warden and asked to be conducted back to his own cell. Thus he became the hero of the Huntsville penitentiary. The newspapers published accounts of his heroic assistance in suppressing the uprising of the convicts, and many visitors were given permits to interview him. A movement was started to get a pardon for him, prison officials and people on the outside becoming interested in the matter. Petitions were circulated, and the necessary steps were taken. And in the midst of it all a little woman was rejoicing for she realized that her work and her influence had not been in vain. She believed in John Wesley Hardin, and she believed she could reform the man she so dearly loved.

Shortly after he received his pardon and was released from the penitentiary Hardin was admitted to the bar and moved to a border city and engaged in law practice, with what success I am unable to say. I do not know what became of his wife whose influence over him was always for his betterment.

John Wesley Hardin was a most remarkable man. He killed many men, it is true, but he killed them because they hunted him as they would have hunted a wild and dangerous animal. He killed them knowing that if he did not kill they would kill him, and self-defense is the first law of nature. His capture at the time he was arrested and convicted was planned and carried out for two thousand dollars placed on his head. No one was killed at the time of his capture, as has been erroneously reported. And when his earthly career was brought to a sudden end he was shot through the back of the head, and never saw the gun that killed him.