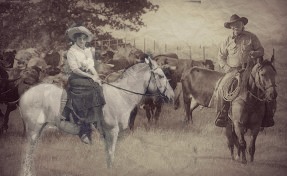 Going up the Chisholm Trail with the cowboys and herds of cattle in the seventies.

Traversing the extensive, unpeopled stretches of country between the cattle ranges of Texas and the shipping points in Kansas when San Angelo was merely Concho Post and other flourishing towns of West Texas were as yet without beginning.

Meeting Indians and shooting buffalo on the way.

Traveling for miles where there were no signs of habitation and sometimes blazing new trails. Interesting experiences to be recalled by any man.

Mrs. Minta Holmsley of Comanche is among those pioneers who recall with fond reminiscence, that they "went up the trail." So far as she knows there are only two women who can claim this distinction. The other is Mrs. Amanda Burks of Cotulla, vice president of the 0ld Trail Drivers' Association, and generally known as the "Queen of of the trail."

Mrs. Holmsley's husband, Captain James M. Holmsley, who died in 1882, was a very prominent cattleman and merchant in West Texas in the early days and the firm of Kingsberry & Holmsley made immense shipments of cattle .

On two of the trips Mrs. Holmsley accompanied her husband when the cattle were being driven to Kansas. One of them was over the old Chisholm Trail, but the other was over a new route and a large part of the time was spent in a buggy with her husband, ahead of the outfit, selecting the route over which they were to come.

On the drive which she speaks of, the cattle were divided into four herds with 2,200 head in each herd. There were five cooks along, and several bosses, a bookkeeper and the cowboys bringing the total number in the party to about 100. It was an interesting phase of pioneer life, never again to be duplicated.

While it was a pioneer life it was not so "primitive" in the sense that the term is so generally used, for on the trip over the Chisholm Trail, excepting such time as she chose to ride a cow pony, Mrs. Holmsley traveled in a $1,700 carriage that her husband had bought for her.

"And what was the big result of these trips?"' Aunt Minta asks. "Why to get my name in a medical journal in Kansas City," she answers her own question, since she knows you would never guess it.

One of the cooks went into the woods," she explains, "and got poisoned with poison oak. He was in a bad condition, with his whole body swollen from the poisoning. I went into the medicine box that was carried along with the outfit and got out the medicines that we had. I reasoned that cream of tartar was cooling, that sulphur would purify the blood and that salts would carry off the poison from the system. So I worked well together a mixture of cream of tartar, sulphur and salts and began to administer it. He showed improvement after the first dose and was soon well."

Going to Kansas City at the end of this trip, Mrs. Holmsley visited in the home of a doctor and his wife and there related her experience with her patient. That night the doctor attended a meeting of the medical society and the next she knew of it was to read, in the medical journal, much to her surprise, an account of her prescription and how it was originated.

She later used the same prescription with fine results when she found a poison oak victim when visiting in Fort Worth, she states with some pride.

On the latter of their trips, which was in 1877, when Capt. and Mrs. Holmsley were in advance of the outfit in their buggy one day, they saw, as they thought, Indians approaching them. Captain Holmsley raised his hat above his head in a signal which his Men understood to mean "come and come quick." The cowboys left their herds and came on the run arriving in a few minutes, but not before the couple had been faced by two men, one of whom they recognized, in an Indian disguise, as John Wesley Hardin, who had been widely known as a desperado and who was then under indictment in Comanche County for murder.

Hardin and his companion fled before the cowboys arrived, Mrs. Holmsley states, and Capt. Holmsley detailed a couple of men to follow them and report on their movements. They were traced to a railroad station and this eventually led to Hardin's capture in the same year in Florida.

But if these were only disguised as Indians, real Indians were to be met with just a little bit later, though still not such as to molest the party. Just about this time, says Mrs. Holmsley, they met with a band of several hundred unarmed Sioux Indians, some of those who at an earlier period fought with Sitting Bull when Custer was killed and who were then being taken to a reservation in the Indian Territory.

Robert T. Hill, now one of the prominent American geologists went with the Kingsberry & Holmsley outfit on this trip. Hill was then starting away to school. He had been working in a printing office in Comanche and was known as "the rock boy," since he spent his spare time in the hills examining the geological specimens of the country, and brought back many rocks to the printing office with him. "He had a pile of rocks as big as that bed and as high as the table”, said Mrs. Holmsley, recalling these reminiscences a few days ago. Hill wanted to go away to school and Capt. Holmsley encouraged him in the project, arranging for him to make the trip into Kansas with the cattle outfit as the beginning of his journey to school.

One day some grazing buffalo were sighted lit a distance and Capt. Holmsley and some of the others decided to go buffalo shooting. Mrs. Holmsley spoke of going, too, and Hill told her to get on his pony and threw a blanket over the saddle and Mrs. Holmsley mounted. "We rode sideways then because we didn't have any better sense", is an explanation interpolated by Aunt Minta at this point.

They rode toward the buffalo, undiscovered by them until they approached near enough to make a run upon them. Mrs. Holmsley was riding just behind the men, and just as spurs were put to the horses for the dash toward the buffalo, her pony ran into a deep buffalo trail, or rut, throwing the pony down and hurling the rider violently to the ground. She got up, remounted her pony and returned to camp, saying nothing there of what had happened. Her husband and the other men. intent upon their attack on the buffalo, had not seen the accident, nor noted her absence until she was well on her way back to camp. When they came back they asked her what was the matter and she told them she had a headache. "And that was the truth." she says, "for I certainly did have a headache when I got up from that fall." But she took care during the next few days that no one should see how her arm was bruised black and blue, and she never did tell her husband nor Hill nor any of the rest of them of the tumble that she and the pony had.

If action, near tragedy, suspense and a happy ending are the elements that make up a successful story, here they are found to be ready for some writer in the last incident to be related concerning Mrs. Holmsley and the trips up the pioneer trails.

Arriving at EIlis, Kan., the steers for the markets had been placed in the cornfields of the country and kept there until in the winter. Mrs. Holmsley was at Ellis and Messrs. Holmsley and Kingsberry had gone to Kansas City, St. Louis or other points on business.

There was a ball one night at the hotel where Mrs. Holmsley was staying, and there was a deep snow outside. "I was on the ballroom floor," she relates, "with all my finest finery on, when a telegram for Kingsberry & Holmsley was brought to me. It was from a commission firm in Chicago, asking that the best steers be shipped at once, intimating that top prices could be gotten for them then, but that the market might be down soon. I didn't know where to find either Messrs. Kingsberry or Holmsley, but I thought it was time for action."

So, leaving the ballroom, out into the snow she went to find the railroad agent and arrange for cars. Then to a livery stable to get a buggy and make a twenty two mile drive to the cornstalk fields where the cattle were, to arouse the foreman and get him into action for the shipment. Returning to town, having made an all night job of her task, she looked after the sanding of the cars. Before a great while the several cars of cattle were on their way to Chicago.

Two or three days later Messrs. Kingsberry and Holmsley returned and simultaneously with their arrival came the news of the great break in the cattle market. You have ruined us! You have ruined us!!" they exclaimed when informed what the young Mrs. Holmsley had done.

They were the picture of gloom. They were the bluest looking men I ever saw," says Mrs. Holmsley, "and I stood there with them in the hotel feeling bluer than they looked for I certainly didn't want to ruin them."

While they were standing there a messenger boy came in with a telegram for Mrs. Holmsley. The telegram is as from the commission firm, congratulating her on having made one of the biggest and best sales that had been made in Chicago. The sale was consummated Iwo days before the market broke. If the "Ain't It a Grand and Glorious Feeling" artist had been at work then he would have had the best subject that has ever been his lot to work into a picture.

Mrs. Holmsley still lives in Comanche in the home that was built by her husband over fifty years ago, some six or seven years before his death.

Like these hard to find first-hand accounts of frontier Texas? Get a SEARCHABLE flash drive with 352 complete issues of Hunter’s FRONTIER TIMES MAGAZINE here.

For a limited time, use coupon code "half-off" (without the quotes) for a full 50% off EVERYTHING in the store!!