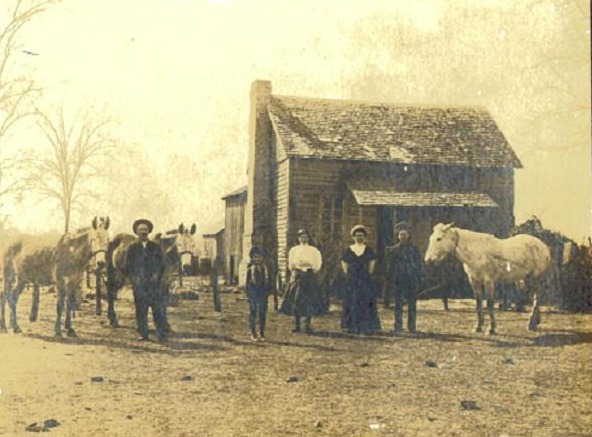 During the period that has passed into history as the reconstruction days, the people of the southern states and especially those who had served in the Confederate army, were made the victims of many acts of cruelty and oppression. The people of Texas did not suffer so much as those of the other southern states, but heaven knows it was bad enough in Texas. All of the southern states were under military rule and all the civil offices were filled by military appointees, a horde of hungry men from the North who were known as carpetbaggers and scalawags, whose only idea seemed to be to oppress the southern people and to line their pockets. There were many men in Texas who had served in the Confederate army who had never learned "To bend the pregnant hinges of the knee, that thrift might follow fawning," who did not take kindly to the military carpet-bag rule and were outspoken in their denunciations of the many acts of tyranny practiced. Among these was Major Dan McGary, who was a lawyer of ability and a fluent writer who started out at the beginning of the war as orderly sergeant of the company to which I belonged. Soon after the close of hostilities Major McGary became editor of the Brenham Banner, a weekly paper published at Brenham. General Griffin was in command of the department of Texas at that time and he undertook to exercise a strict censorship over the press of Texas. With this idea in view he issued an order, a copy of which was sent to every newspaper in Texas, requiring the publisher thereof to send two copies of his paper to Gen. Griffin's headquarters. When Major McGary received this order he wrote to Gen. Griffin that the subscription price of the Banner was $3 per annum and to Yankees and carpetbaggers payment in advance was strictly required and on the receipt of $6 he would be pleased to send him two copies of the Banner. For this and many other utterances of a similar nature, Major MeGary was arrested and imprisoned in the county jail at Brenham and from his cell in the prison he was wont to write his editorials to the Banner, dating them all County Jail, Washington, Texas. I remember one of these editorials began with the words, Fort Worth Record "Breathes there a man with soul so dead who never to himself has said, Damn the Freedman's bureau."

For the publication of this particular article Major McGary was heavily ironed and chained to the floor of the cell. He was finally released from prison, however, and lived to see the horde of Carpet Baggers and Scallawags pack up their carpet bags and return whence they came. Major McGary died some years ago, and at the time of his death was editor of the Houston Age. For some years before his death the press of Texas always spoke of him as Uncle Dan'l.

There was at that time and is yet a regiment of the United States cavalry known as the Ninth, which was composed entirely of negroes. This regiment was ordered to the frontier to garrison the frontier forts of Texas and passed through San Antonio, near which city they camped for several weeks. There was in that portion of Texas no branch of what was known as the Ku-Klux-Klan but there were several similar secret organizations composed of ex-Confederates, which were organized for the protection of the southern people, which had their signs, grips and passwords and in which the female relatives of any member were eligible for membership. The female members were only entrusted with the signs and words to be used in cases of distress or danger. The negroes belonging to the Ninth cavalry were not permitted by their officers to come to town armed, but one day a burly mulatto negro succeeded in eluding vigilance of the guard at the camp and came to town armed with a cavalry saber. This fellow imbibed very freely and finally became about half crazed with drink. Then he mounted his horse and drawing his saber rode about the streets, cutting and slashing at everything that came in his way. He started from Main Plaza down Commerce street, whooping like a Comanche. He had only gone one block when Miss Nellie M—a beautiful young lady of that city, who was coming up Commerce street and was just in the act of crossing Victoria street when the negro ruffian, seeing her, attempted to ride her down, at the same time aiming a blow at her with his saber. In her fright the young lady shrieked out the distress words of one of the secret organizations before referred to. There were a number of men standing along the walks and in store doors watching the negro, and a volley of shots rang out and the negro and his horse both fell together, and I do not suppose either of them knew what hit them. Somebody had the curiosity to examine the body of the negro, and found that twenty-four bullets had struck him. Fifty or sixty of us were arrested and arraigned before the local agent of the Freedman's bureau, but nothing came of it, and the cases against us were dismissed.

There were in San Antonio at the close of the war several men who, although they had served in the Confederate army, affiliated afterward with the Republican party for a time. Among these was Alexander Sweet, who some years later founded a humorous periodical known as Texas Siftings and published it in Austin, and which still later was moved to New York.

Alex was city attorney in San Antonio in Reconstruction days, and any ex-Confederate who was arraigned before the federal, municipal, or any other court on any charge was usually convicted, no matter what might be the evidence. When the Democrats finally came into power, Captain George S. Deats, a gallant ex-Confederate officer, was elected city recorder, but for some reason Alex Sweet, who was city attorney, held over for several months. Captain Deats knew little of the law, but he was a man of fine common sense. One day an ex-Confederate was arraigned before Captain Deats on some trivial charge, and Alex Sweet, in conducting the prosecution, attempted to introduce some evidence which the court ruled out. Then Mr. Sweet arose and said: "But, your honor, let me read you the law on that point." Captain Deats replied: "Nevermind, Mr. Sweet, we do not propose to have so much law and a little more justice in this court in future." Alex Sweet was a born humorist, but it was some time before he found it out himself. Soon after he established the Siftings at Austin, he went over to San Antonio to visit his parents, accompanied by his eldest son, a bright boy of perhaps ten years of age. They arrived after night and stopped at a hotel instead of going to the parental home. The next morning they started out for a stroll before breakfast, and on the corner of Military Plaza met Colonel James R. Sweet, who had gone to the market. I was talking to Colonel Sweet when Alex and his little son came up. After the greetings were over Colonel Sweet patted his little grandson on the head and remarked: "Alex, that is a mighty fine, bright boy—much brighter than you were at his age. "To which Alex promptly responded: "Yes, I expect that is so, Pa; but just see the difference in the fathers of the two boys!" At which the old colonel laughed heartily and we all went to see a man.

(Editor's Note—Taylor Thompson, the writer of the above sketch, was a well-known printer and newspaper man of pioneer days. He was also a scout and ranger, and wrote many sketches of his experiences on the frontier. During the last years of his life he sat in darkness, having become blind, and had to dictate most of his writings. His death occurred in 1922 at the Confederate Home in Austin, of which institution he had been an inmate for a number of years. From time to time we will publish his narratives and we are sure our readers will find every one of them interesting.)