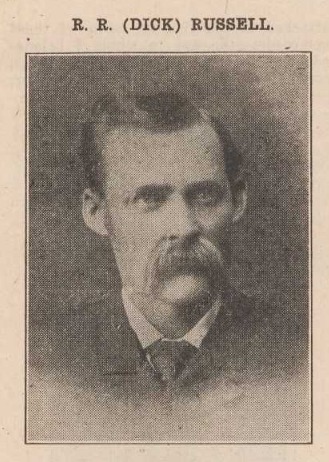 Richard Robertson Russell was born in Dawson county, Georgia, October 8th, 1858. the son of J. O. and Jane Robertson Russell. He moved to Texas with his parents when he was 12 years of age, and worked for his uncle, Peter Robertson, who branded a cow for him. He was never out of the cattle business from that time until his death. Mr. Robertson said that at 13 Dick Russell was the best hand on the ranch. Copying from the book, "Texas--the Country and Its Men," page 194, we give the following: "He was strong for his age, all expert horseman and dead shot, hardy and tireless. It was natural that he should drift into a service that, although exceedngly dangerous at times, was especially appealing to one of his adventurous temperament. During the seventies Menard county was the scene of numerous Indian raids and young Russell, catching the spirit of the times, enlisted in 1880 with Capt. D. W. Roberts' Ranger company, which was stationed in Kimble county. He served two years and resigned to look after his cattle interests. In November, 1886, he was elected Sheriff of Menard county, which office he held for ten consecutive years. He refused to be a candidate for re-election at the end of that time, as his personal affairs needed his attention. Mr. Russell became a member of the Texas Cattle Raisers' Association in 1889 and served on the Executive Committee many years."

Mr. Russell was married in 1892 to Miss Mattie E. Strickland, daughter of the late George Strickland, a pioneer ranchman of Tom Green county. Some years ago Mr. Russell moved to San Antonio, and died in that city June 28th, 1922. He is survived by his wife and two daughters, Mrs. Corinne Russell Judkins, wife of Dr. O. H. Judkins, and Mrs. Elma Dill Spencer, wife of Judge R. F. Spencer, all of San Antonio