Texas Rangers Were First to Use Six-Shooters. - W. P. Webb 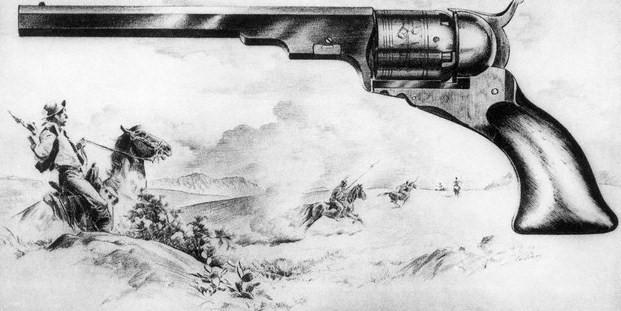 (Editor's Note.—W. P. Webb holds the position of adjunct professor of history at the University of Texas. He has written extensively for magazines and books about frontier life in Texas, early fights with Indians, and about the State rangers.)

It was during the Republic that the rangers won a name as fearless and brave men that has clung to them down to the present time. They have always been a mounted force, and even today there is a saying that a ranger is no better than his horse. They had to go mounted because their enemies were mounted, and they were few because the State was too poor to maintain a large force. These early rangers had to makeup in quality what they lacked in numbers. It was also during the Republic, 1836-1845, that they developed their technique of war. They were the first men to learn the use of the six-shooter, and to learn that the six-shooter was the logical weapon with which to fight the Indian on horseback. It was in Texas that the white man first came in contact with mounted Indians. The Americans had, up until the time Texas was settled, fought the Indians on foot. But when they came to Texas, they passed from the timbered area on to the plains, and on the plains and prairies around San Antonio they met the Comanches, the superb horsemen of the country. It is said that these Comanches could shoot their arrows from a running horse so rapidly that they could keep one in the air all the time. The Texans needed a weapon that carried several shots, and that wielded from the hurricane deck of a Texas mustang. It is not known when the rangers first got the six-shooter. An unsubstantiated story has it that S. M. Swenson went to New York, where he met Col. Colt who had just perfected his revolving pistol. Swenson realized at once that the revolvers would be useful to the fighters of Texas and when he returned to Austin he called them to the attention of President Houston, who purchased a number of them for the army and navy. At any rate, whether the story is true or not, the ranger did get possession of the six-shooters, and under Jack Hays they learned that these guns were good medicine for the Indians, that they made the rangers as good mounted fighters as the Indians were with their bows and arrows. It was this six-shooter that made them invincible on the Western plains.

When Texas joined the Union in 1845 the ranger thought that their work was over and that the task of frontier protection would be taken over by the Federal government. In fact, that was the agreement between the two Republics and one of the chief reasons why Texas wanted to get into the Union was in order to gain the protection of the strong and long arm of Uncle Sam. But Uncle Sam had his own ideas of dealing with Indians and these did not always accord with the ideas of the early Texans.

In the Mexican War, which followed the annexation of Texas, the rangers played a prominent role. Jack Hays was made a Colonel and he led his band into Mexico, at the head of Taylor's army. The rangers participated in the first battle of the war and they fought in the last engagements. Throughout they made a great reputation for themselves and their fame spread over the continent. They were very valuable in the war, because they understood Mexican tactics of fighting. They were an unmanageable troop, however, when no fighting was in progress, and a great trial to officers who wished to impose strict military discipline. The rangers are not soldiers, they have never worn uniforms, carried flags or assumed any paraphernalia of war outside of terribly effective weapons which they used on their horses with consummate skill. The Mexican War is the only one in which the Texas rangers have ever served as a separate military unit.

Reconstruction came with all its horrors, and there was organized in Texas what was known as "State Police." The odium that is attached in Texas to this body of men is a safe guarantee that the name will never in the future be applied to an honorable body of men whose business it is to keep peace and to protect life and property. The history of the reconstruction State police is a history entirely apart from that of the Texas rangers, and should never be confused with it.

After reconstruction Texas was filled with desperate characters as a result of war and its aftermath. Feuds broke out in various parts of the Slate, the Indians were still troublesome in the West and the need for the old organization was strong. The rangers were reorganized at this time, and the great names among them are those of Capt. McNelly and Maj. John B. Jones. Capt. McNelly broke up the Dewitt County feud in South Texas and chased a band of desperadoes almost to the Mexican border. The only reason he did not chase them to the border was that the rangers were such good shots that it was not necessary to ride that far. The story is told that McNelly had an army wagon sent out from Brownsville which gathered up seventeen bodies and brought them in and piled them up on the public square of that town the bad characters could see that law and order had returned

What Capt. McNelly did to the riff-raff of the South, Maj John B. Jones did to the Indians of the North. He established a series of posts along the Western Frontier, and in a mule wagon accompanied by a small body of men he patrolled the State from Red River south and west. It was a line held by a few men, but it was almost impenetrable to the Indians. Every trail leading "in" that is, to the settlements, was followed and the marauders punished. The Indians learned to fear and respect the diminutive Major and his stalwart men. It is an interesting fact that both McNelly and Jones were very small men, though for courage and sheer nerve and boundless energy they could not be surpassed.