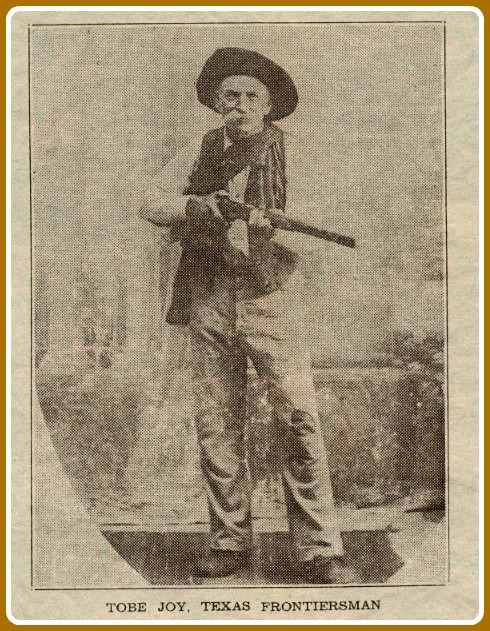 Tobe Joy, whose photograph adorns the cover page of Frontier Times this month, was a typical Texas pioneer and frontiersman. He lived in Kimble county for many years, and was known as an honest, upright, hospitable citizen. The photo shown on our cover was taken at Mason, Texas, in 1903. He died several years later. His father settled on James river in Kimble county in 1856. His mother and sister were massacred by Indians on the headwaters of the Pedernales river during a raid when many of the settlers had narrow escapes. Tobe Joy and his brother, Dick Joy, served in the Confederate army during the Civil War. In the spring of 1858 the Indians made a raid through that country and attacked and stole a bunch of horses from the father of Tobe Joy, and the young man, then a lad of about 16, joined in the pursuit of the savages. The next year, 1859, the redskins made another raid through that country and attacked a camp on Johnson's Fork, occupied by Tobe's father and a Mr. Cass, and were driven off. Mrs. Cass was in the camp with her husband and Mr. Joy, and during the fight the brave woman seized a shotgun and blazed away at an Indian, shooting him through the hips. She made a dead shot as later his body was found. In 1860 the Indians raided Doss Valley and in this foray they stole several horses belonging to the Joys. In 1862 they raided the James river country, took thirteen horses and mules, and killed twenty-seven head of cattle in sight of the Joy home. In February, 1863, Jim Little, another citizen of that region, started to Fredericksburg to procure medicine for his sick mother. The day following, while on his return, he was overtaken by the Indians and murdered near Salt Branch. Eight days later his body was found by Tobe Joy. In 1864 Amos Fairchild and several others were killed by the Indians.

Tobe Joy related to the writer many incidents and tragedies that occurred in that part of the frontier while he was growing to manhood. He participated in many battles with the savages, being wounded on one or two occasions. He entered the Confederate army about a year before the Civil War ended, but did not get far from home. After the war he returned to the ranch and lived there until his death. He was a great bear and deer hunter, and was an expert rifle shot. The great tragedy of his life was when his sister and mother were killed by the Indians, an account of which will be given soon in Frontier Times. After the murder, his father abandoned the walks of civil life and spent the remainder of his days trailing and killing Indians. Like a Nemesis, he shadowed their presence, always going alone, and his trusty rifle was never known to misfire or its leaden missile fail his aim.