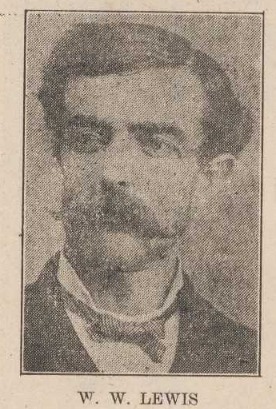 One of the outstanding figures of frontier days around Menard, Texas, is William W. Lewis, but when you meet this quiet, unassuming, mild-mannered gentleman you would never suspect that his early life on the border was one continual round of danger and hardship, and that he was one of the heroic Old Guard which cleaned the frontier of the Red Man and outlaws. He is averse to recounting matters concerning himself for publication, but there are yet living many of his old comrades who unhesitatingly speak out in flattering terms of the fearlessness and readiness of "Bill” Lewis, as they call him, in responding to any and every call for Ranger duty.

Mr. Lewis was born September 7, 1855, at Carrollton, Kentucky. At sixteen years of age he went to Abilene, Kansas, and there joined W.T. Burnam's cow outfit returning to Texas after disposing of the herd of cattle they had driven overland to market from Texas. In the spring of 1872 he went to Old Mexico with a view of locating there, but returned to Texas after a three months' sojourn in the Mexican republic. Life in that part of Mexico being then as ever since, too wild and wooly to be attractive, he worked on ranches around Burnet during the fall and winter of 1872, and in the spring of 1873 he went up the trail with W. T. Burnam outfit with a herd of beef cattle. The herd summered in Kansas and later was driven to Northern Nebraska and sold. Mr. Lewis then returned to Texas and wintered in Dallas, going back to Burnam's ranch in Burnet county in the spring of 1874.

On May 25, 1875, Mr. Lewis joined the Ranger service, Company-D, Rufus Perry captain, member of quota from Company D forming part of escort of Major John B. Jones, commander of the Frontier Battalion (six companies) going the rounds of the different aggregations under his command being scattered from the Red River to theRio Grande for three months, during which time he was engaged in much active campaigning against the Indians. He rejoined Company D at Menardville in the fall of 1874. In November, 1874, Captain Dan W. Roberts, assumed command of Company D. On May 25,1875, Mr. Lewis applied for and received a discharge from service in order to return to Kentucky on account of the death of his father. He returned to Austin in the fall of 1875, remaining there until reenlistment in the Ranger service in March, 1876, Major John B. Jones, Battalion commander, as member of Major Jones' escort. After serving with Major Jones, with the privilege of selecting company to serve with, he elected to go back to his old Company D, Captain Dan W. Roberts, then stationed at Ranger Springs, near Menard. He resigned from the Ranger service in October, 1877, on Bear Creek, Kimble county, Texas, Lieut. Frank Moore commanding remnant of Company D.

On April 3, 1879, he was married to Miss Nina B. Splittgerber, member of a pioneer Gillespie county family, and located in Menard county, where he has remained since. Mr. Lewis has filled various positions of trust, having held different county offices and as mayor of Menard. He has always enjoyed the confidence and esteem of all the people.