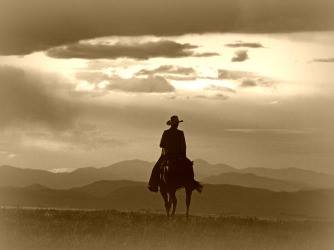 The following article was written by Austin Callan, well known feature writer, was brought to the Chronicle office by Mrs. W. E. Wood. The R. C. Morgan whose name appears in the article several times is Mrs. Wood's father, Two other men featured in the article, Frank Alexander and John Sinclair are her uncles. Col. J. E. McCord, father of J. P. McCord, is also mentioned.

The Christmas of 1862 was a cheerless Christmas to West Texans. Most of the able-bodied men were away from home, serving in the Confederate Army and their women and children poorly protected from roving Indians.

The 46th Texas Cavalry, organized for the safety of the Texas frontier was made up of young men living out there from the Colorado river westward. Col J. E. McCord, for many years a prominent and much beloved citizen of Coleman, Texas, commanded the 46th Cavalry. In December, 1862, he established a ranger camp at the foot of Santa Anna mountains, in Coleman county.

Comanches had been raiding in that vicinity and their trail led through a gap in these mountains. Among the men assigned to the ranger camp were Lieut. John Sparks, later governor of Nevada, Frank Alexander, John Guest, R. C. Morgan and John Sinclair. They were experienced frontiersmen, accustomed to Indian scouting and fighting.

The day before Christmas a blizzard had swept through the Santa Anna gap, accompanied by heavy snowfall. The ranger camp was, therefore, a cold cheerless place with its tents, improvised bunks, crude cooking utensils, and scant supply of provisions.

"We'll miss our hot plum pudding this Christmas," Lt. Sparks said to the boys, as he pulled back the tent flap and looked out upon the storm which had slightly abated.

"Yep, and we'll miss the Virginia Reel with them Jim Ned creek girls" put in John Sinclair, puffing at his pipe and thinking of more peaceful days when Earl Van Doren, E.Kirby Smith, John B. Hood, and Fitzhugh Lee, now fighting for the Confederacy, made merry at Camp Colorado, in Coleman county.

Frank Alexander was a rugged ranger, noted for physical strength and plain speech. He snarled at the mention of plum pudding and "leg-shaking," as he called dancing. Lifting a cup of black coffee to his lips, he said, "This ain't no sort of country for a fellow to be thinking of such trimmings as you boys mention. It's a place for fighting men and jerked beef. By the holy lizards, I'll miss no ginger cake or shin-digging, but I'm going to miss my turkey gobbler and rich stuffing."

"That gives me an idea, Frank, "Lt. Sparks said, smiling. "We can have a turkey for Christmas. It is not far down to that thicket where Guest said he saw a big bunch of wild turkey at sundown the other day. It's on Santa Anna creek, you know. I'm going to detail you and John Sinclair to go down there and get the bird. I'll have Morgan barbecue it, then we'll have a sure-enough Christmas dinner."

Alexander and Sinclair agreed to get the turkey, if there "air any to be had," as they put it.

When the two rangers were ready to go, John Sinclair winked at one of the boys and said: "I reckon there ain't any sneaking Comanches prowling around in a storm like this."

"Well, what of it?" retorted Alexander." I'd as lief fetch in an Indian buck as a turkey gobbler. The same amount of powder is burnt for one as t'other. Maybe, I'll be able to get a Comanche to put in your sock in the morning. Try hanging it up."

"Maybe you'll have a Comanche in those red top boots you are wearing," ventured Lt. Sparks. "If I were you I'd leave them in camp. They will catch some Indian's eye."

"Never mind, " laughed Frank. "The red devil who gets these boots will have to catch the fastest colt in the 46th Texas Cavalry."

Soon the two rangers, Alexander and Sinclair, were riding toward Santa Anna creek. By now the snowflakes were flying fast and thick, swallowing up the rangers before they were a hundred yards from camp. It was a nasty blizzard, and only game men would face its fury to secure turkey meat for Christmas dinner.

"They are rough and ready cusses," commented Lt. Sparks, looking in the direction taken by Alexander and Sinclair, "but as gritty as the sand in these hills. Such men make a red-blooded fellow love the frontier. I reckon either one of them would tackle the devil. They seem to get as much pleasure out of courting danger as courting girls over at the settlement.”

The thicket on Santa Anna creek was miles from the ranger camp. Alexander and Sinclair had been there many times, or else they could not have picked their way in such a blinding snow storm. Certain familiar trees and landmarks along the route assured them they were going in the right direction.

Once Alexander checked his horse, listening intently. "Did you hear that?" he asked Sinclair. "It sounded like a wolf and any wolf prowling around in a blizzard like this is a fool."

"I reckon it was the wind howling," Sinclair said, and the two rode on in silence.

Finally arriving at a point on Santa Anna creek, where there were heavy live oak trees, they dismounted and crept up under the trees, presuming that turkeys would seek shelter in the protected bottom. It was impossible to see far ahead, but at fifty yards Alexander caught sight of a big, lone gobbler. As the turkey disappeared in a thicket, he ran around the opposite side, hoping it would come out of the brush and he would get a shot at it.

Sinclair, meanwhile saw several turkeys running in an opposite direction and took in after them.

Alexander, still waiting for the gobbler to come out of the thicket, decided to smoke his pipe. He put his gun down in order to crumble some tobacco in the palm of his hand. While thus engaged, he heard brush rustling back of him. Turning quickly around, he ducked just in time to avoid a knife thrust from a powerful savage who had sneaked up behind him. As Alexander ducked, he caught the Indian's wrist in a vice-like grip, the wrist of the hand holding the deadly knife. A desperate struggle now ensued for possession of the knife.

Frank Alexander was a giant in strength. No man in the 46th Cavalry could put his shoulders to the grass. The savage, though large and sinewy, was no match for the ranger. Still holding the Indian at bay by the wrist in that vice-like grip, Alexander slowly but surely forced him to his knees, and finally down flat on his back. Having his enemy now helpless and realizing it was a battle to the death, with no quarter, the ranger wrested the knife from the savage and instantly plunged it to the hilt in his heart.

To Alexander, the killing of this Indian was no great feat, just an incident in frontier life. He never liked to talk about the tragedy. Once he did remark: "I'm not rejoicing. Maybe, that red skin wanted a Christmas turkey, too. Maybe he loved life, like the rest of us. But darn him, he had no business going after my scalp. That's where he made a mistake."

John Sinclair did not know Alexander was battling with an Indian for his life. He was too busy chasing and killing turkeys a mile down the creek. He bagged two fat gobblers, enough to provide a real Christmas treat.

Christmas morning the sun broke clear through sullen skies, sending scintillating beams over miles of level, snow covered prairie—a magnificent sight. No Christmas carols or Christmas chimes heralded the great day in the ranger camp—this lonely camp out on the fringe of civilization—but an odor of barbecued turkey brought memories of home and smiles to ranger faces.

By noon Bob Morgan had the turkeys cooked to an appetizing brown, even surprising everybody with pecan dressing inside the turkeys. Also, as an added surprise, was a pan of baked apple dumplings. The boys has taken seats at the rough pine board dining table, all except Lt. Sparks. He came in at last, freshly shaved, took a seat at the head of the table, bowed his head and offered the following supplication:

How About The Gift of History for the Holiday? 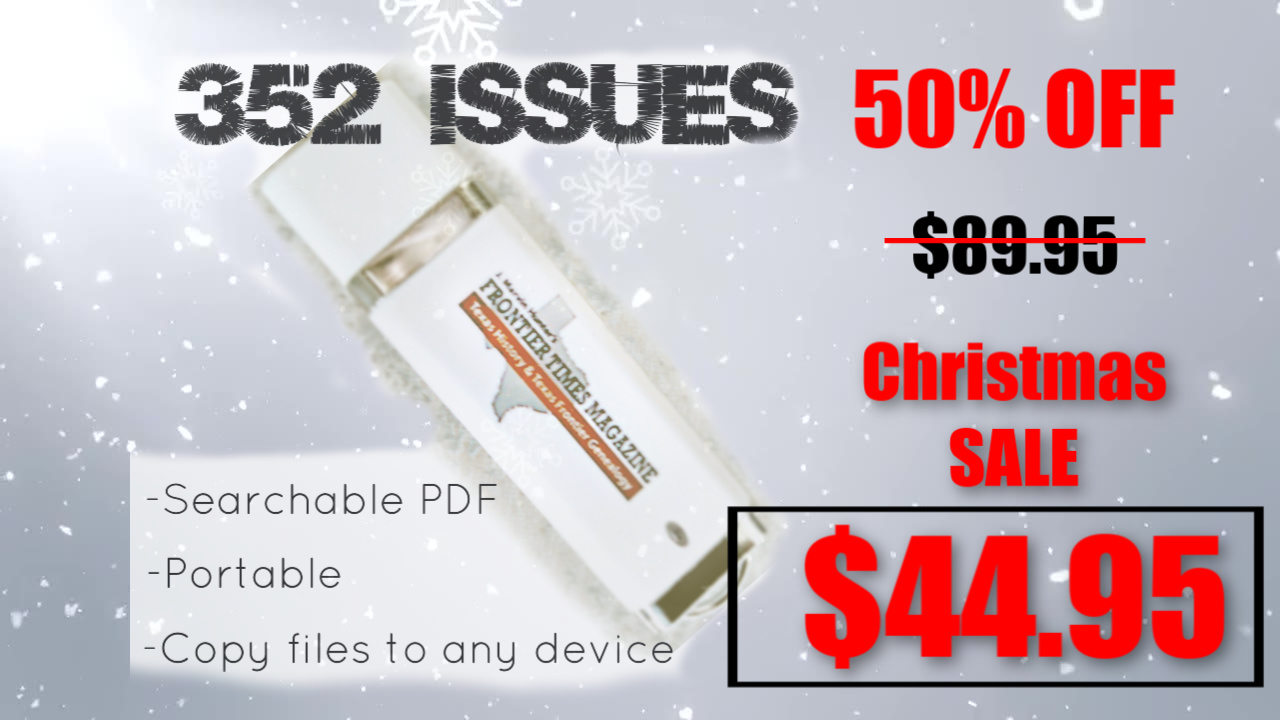 PLUS (FOR A LIMITED TIME) WE WILL ADD 12 HARD COPY MAGAZINES AT NO EXTRA COST!!!